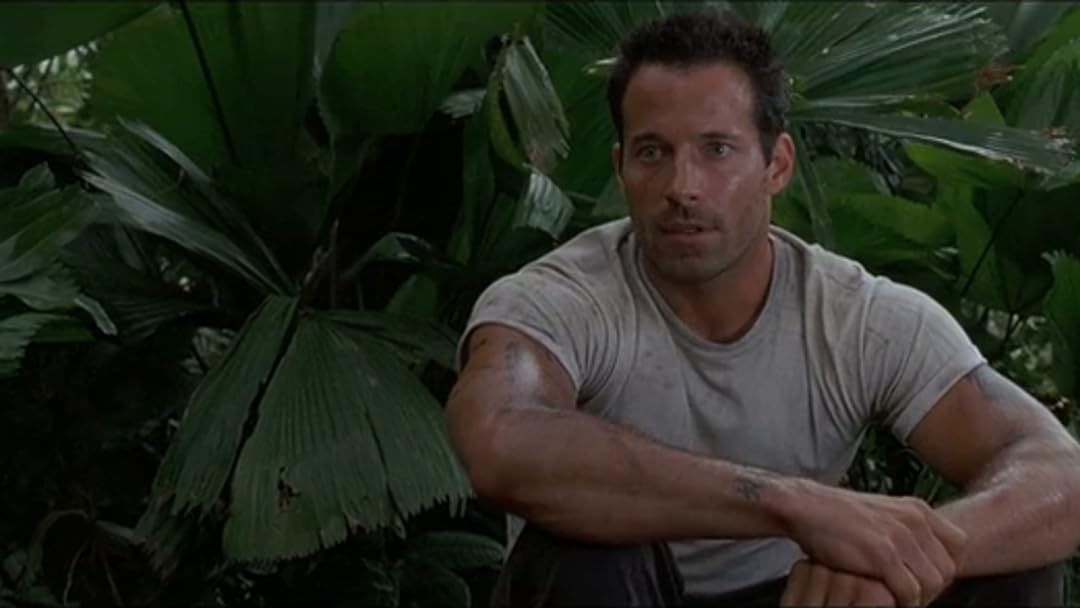 Anacondas: The Hunt For The Blood Orchid

(1,471)4.71 h 36 min2004X-RayPG-13
Eight adventurers brave the perilous jungles of Borneo in pursuit of the fountain of youth, unaware they're being stalked by gigantic snakes that feed on human flesh.

James C GirasaReviewed in the United States on November 25, 2018
3.0 out of 5 stars
Second Best movie of Anaconda series
Verified purchase
This review is for the standard DVD edition of 'Anaconda's: The Hunt for the Blood Orchid' released by Sony Home Pictures Entertainment in 2004.

Starting with this movie, the series is tied together with a flower that comes from the jungle in Borneo called Perrinnia Immortalis. It is supposed to have properties that can keep a person young and/or cure serious diseases like cancer.

Wexel-Hall, a pharmaceutical firm sends a team to the jungle to search for the Blood Orchid. This flower blooms only once every seven years and it exists in only a small part of the jungle in Borneo. Problem is there are giant Anaconda's in the same area. The size of the giant anaconda's is taken as proof of the the Blood Orchid's potency since snakes grow throughout their lives. They take the logical leap of assuming the snakes eat the Blood Orchids. Once there, they have to find a ship captain to take them upriver during the rainy season. They find an American named Bill Johnson and he agrees for a lot of cash. Shortly after the journey begins, the ship is destroyed and the group is stranded in the jungle with giant Anaconda's who are in mating season looking to eat them.

COMMENTS: This is the second and last of the Anaconda movies to receive a theatrical release.
-Ultimately, I can only judge these giant snake movies on their originality and special effects. They all have pretty much the same idea. A giant snake goes hunting people. You have your good guys and the batch of flawed people you know are going to die. What remains is how many original ideas can you come up with for these movies. It's not easy but it can be done. The idea of hunting for the 'fountain of youth' is not knew but it's new in this type of movie.
-The idea of the snakes being long lived and therefore larger is nicely tied into the plot of the hunt for the Blood Orchid.
-I doubt a person like Bill Johnson in this movie is going to stop worrying about money and start helping his fellow man.
-For me, this is the second best movie in the series and the next two are not good.

WHAT ISN'T THE SAME: Hunting for the Blood Orchid or for all intents and purposes, 'The Fountain of Youth'.
-going over a waterfall
-poisonous spider
-Whiny complaining guy also.
-The ending doesn't include a scene with an egg hatching or a baby monster slithering away.

RECOMMENDATIONS: I'm giving this movie 3 stars. It's interesting for awhile but the special effects become inconsistent in the second half of the movie.

Recommended obviously for fans of the 'Anaconda' series and for fans of SYFY channel giant reptile and snake movies.

KraneReviewed in the United States on September 16, 2020
1.0 out of 5 stars
From bad snakes to worse snakes
Verified purchase
Just when you think no sequel can be worse than its poor original, somebody goes and makes Anacondas: The Hunt For The Blood Orchid. This movie is about an expedition through the jungles of Borneo in search of the fountain of youth (FOY). In this version of that classic tale, the FOY comes in the form of a flower with life extending properties which only blooms once every seven years. The goal is to navigate down the river and find the flower before the flower's once every seven years blooming season ends. Their only obstacle blocking their journey is a bunch of ravenous giant snakes pumped up on the life-extending properties of these flowers. The biggest problem with Anacondas: The Hunt For The Blood Orchid isn't its plot, but its shallow and highly predictable characters. The even include a part where they reference Animal Planet just before they violate everything we know about animal behavior. Such as giant snakes moving at lighting speed and gulping down their prey. Reptiles speed slows as they increase in size. But obviously, the writers must have missed that episode.

There is no single lead character in this movie, rather each member take turns leading the group and making bad decisions that lead to members of its expedition being eaten. There is no true bad guy here, just one with a different set of ideals and priories.

Anacondas: The Hunt For The Blood Orchid is the type of movie where you predict who among the group will be the first to be eaten, and all of the others in line to follow. Getting this right is really the best part of watching the movie. Although even that is not enough to make the film a satisfying experience. Its just too easy. Since the characters are totally unrelatable, by the time the death toll reaches halfway, you find yourself routing for the snake to just eat the rest to put them out of their misery and end the movie.

Its not science fiction nor suspense, though not for the lack of trying. Its just going through the same familiar monster movie motions we've seen a million times before. It you like watching movies of wild animals doing things and behaving in ways we all know they would never do, then Anacondas: The Hunt For The Blood Orchid might be the movie made for you.
One person found this helpful

Avid readerReviewed in the United States on September 20, 2020
3.0 out of 5 stars
An entertaining sequel
Verified purchase
The first Anaconda movie was fun, especially with the Jon Voight character and the hokey CGI, but that was probably state of the art when the movie came out. This movie adds a new twist with beautiful scenery. And that is probably the best thing about the movie. The ‘Blood Orchid' is supposed to be the fountain of youth type drug, so the drug company sends out a team to gather some. They had a minuscule supply to test and it only blooms for three weeks every seven years, so the team is against the clock. And the doctor from the drug company turns out to be the bad guy, and the Cole character turns out to be the annoying one. The CGI snakes are much improved, and the reason they are so big is that they ingest the Blood Orchid which enables them to grow very large. Of course when they get to the start, it is raining heavily and no one wants to take them up river as it is too dangerous. But they find a pilot and a decrepit boat to take the journey with. The rest is the movie. Passable entertainment and it really is not a waste, but neither is it great.

PiwacketReviewed in the United States on September 21, 2020
3.0 out of 5 stars
The monkey was cute
Verified purchase
Lot of hokey overacting, but I've seen worse. The low taking tough "hero" was trying so hard to be tough it was annoying. The women were all screeching with boobs popping out all over the place. This was right up there with all the corny teen lost in the jungle, lost in the ocean, lost on an island garbage out there. Even though these are adults the script is bad along with the acting. I liked the monkey.
4 people found this helpful

J. WestReviewed in the United States on September 25, 2020
5.0 out of 5 stars
"Hey Gail, Can You Hear Me Now!"
Verified purchase
This was just as great as the original film. It had a lot going on. The action was absolutely awesome. The storyline was a lot different and it makes you wanna watch it again. Great performances and role by Johnny Messner, KaDee Strickland, Salli Richardson, Nicholas Gonzalez, Eugene Byrd, Karl Yune, Matthew Marsden, and Morris Chestnut. Great choice of cast. The effect of these large anacondas were great, even larger than the original. I really enjoy this one, it's a lot of fun, plenty of drama and action. There was great lines too. I recommend this to all the snake lovers out there.
One person found this helpful

msgrnbayReviewed in the United States on September 29, 2020
2.0 out of 5 stars
It's ok at Best
Verified purchase
It's a pretty weak movie especially where snake horror films are concerned. Some parts were good, most other parts blah. The monkey was cute, but man oh man, all the times it should have died or have gotten lost, it kept popping up. On the one hand I'm glad because he was endearing, but it mostly reminded me of how lame this movie and script is. Some scenes seemed forced just to speed up to the next scene to move the movie along, just like the chemistry between the two wanna be couples, forced and unbelievable.

Moon ValleyReviewed in the United States on October 26, 2020
2.0 out of 5 stars
Really? That again?
Verified purchase
If you can look past the fact that there are neither tigers nor anacondas in Borneo, you're still left with a huge collections of snake movie clichés. It's like the writers binge-watched every B movie about snakes, crocs, temples of doom, and made a checklist of predictable clichés to make sure they all made it into the script. It's better than the movie with John Voight as the captain, but that's not saying much.

Glama PussReviewed in the United States on September 9, 2021
3.0 out of 5 stars
Entertaining, fun and...
Verified purchase
far better than the original Anaconda film. I loved the scenery (actually filmed in Fiji, not Borneo) was glad the tiger and the monkey didnt get killed. Enjoyed the captain's acting and good looks, some of the cast certainly over-acted. so glad that Jack got it in the end by one of his 'discoveries' and the huge snakes. Recommend for a good laugh with some fear thrown in on a lazy afternoon.
See all reviews
Back to top
Get to Know Us
Make Money with Us
Amazon Payment Products
Let Us Help You
EnglishChoose a language for shopping. United StatesChoose a country/region for shopping.
© 1996-2021, Amazon.com, Inc. or its affiliates