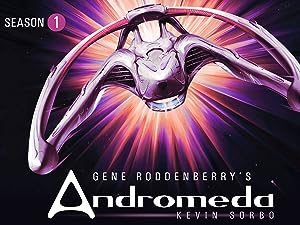 (383)
6.62001X-RayTV-PG
Rescued from a black hole by a salvage ship, Captain Dylan Hunt finds himself 300 years in the future: The universe in chaos and the Commonwealth fallen. He recruits the eclectic crew of the salvage ship to aid him in restoring the Commonwealth, but finds their motives often at odds with his own.

KurtReviewed in the United States on March 8, 2017
1.0 out of 5 stars
Great show, terrible DVDs and packaging
Verified purchase
First of all this review is of the product not the series itself. In fact I found the first season very enjoyable. However, the reason for my 1 star review is several of the disks are nearly unplayable (after cleaning the disk and attempting on as many as 4 DVD players). On every disk there is at least 1-2 episodes where there are multiple skips (fortunately some of the DVD players are able to merely stutter badly instead of declaring the disk unreadable). For me disk 4 was extremely problematic as I was only able to play 1 episode fully, the rest were unable to be played completely. In fact several times it would conk out right at a major plot with the rest of the episode unwatchable. Unfortunately, because the rest of the stutters were fairly minimal I did not request a return. By the time I got to disk 4 the return window had closed.

Buyer beware! If you are going to buy this product buy from another manufacture if possible.

B. KimballReviewed in the United States on October 1, 2017
5.0 out of 5 stars
Still a great show
Verified purchase
I've been hoping for a long time that amazon would have this series. It's pretty good, and it's aged well. Watching all 5 seasons, it's clear the FX (CGI) continued to get better and better each season. But more important are the characters. Most of these actors have a very natural ability for acting (for instance, Beka and Harper) and they do a great job.

Some people criticize season 5 because it was a little different than the previous 4, but the writers continued to come up with great stories and new characters. The show is fun, rarely serious, and sometimes even campy. The show evolved along the way, and so did the characters, something that always kept it fresh and new. But rarely ever happened on say, for instance, Star Trek.

By the way, Lisa Ryder (Beka) makes a quick cameo in Killjoys (another good show). She gets a few seconds of time, and a few lines, one of them being "Don't give a sh*t". Pretty funny, and you immediately imagine her as Beka.

Vladimir KorneaReviewed in the United States on May 14, 2019
5.0 out of 5 stars
great show
Verified purchase
My second favorite Gene Roddenberry show, after TNG. The Nietzschean culture is fascinating. The psychology of the Magog is interesting, they are creatures who are as close as it gets to being born with original sin. The relationships between the ship AIs and their captains is interesting. The spaceship names are poetry. The plot premise is compelling. The action scenes are lame. Sometimes it's too silly. Overall great and worthwhile.
One person found this helpful

Caitlyn DaddonaReviewed in the United States on December 31, 2014
1.0 out of 5 stars
DVDs are forced into the case in such a way as to crack and break all of the disks!!!!! DON'T BUY FROM HERE!!!!
Verified purchase
I bought this as a present for a member of my family who loved the series. We started to watch the DVDs and found that because of the way that the company packaged the DVDs in the case almost all of the DVDs had been cracked. The company tried to force all of the DVDs into the case by squeezing the disks on the sides and so when the disks were removed they cracked. There was no way to get the disks out of the case without pulling at the sides of the DVDs and cracking the disks. Because of this the DVDs refuse to play all of the episodes and most of the episodes that started to play froze midway through and wouldn't let us complete the episode. It was a huge disappointment!! I wouldn't buy this product!!!
14 people found this helpful

JimDandie98Reviewed in the United States on July 15, 2012
5.0 out of 5 stars
Andromeda - Catching Up
Verified purchase
Seven years ago I got the Andromeda - Season 3 Collection, not realizing it WAS Season 3, because it was a Gene Roddenberry creation. It did not disappoint. However, being in the middle of the series' run, I was left with a lot of questions. I went back to the store where I got it, Disc Jockey Records. They were out of stock of Season 1. They never re-stocked it. They soon went out of business. Maybe poor stocking was part of the reason why. When the new entertainment store, fye, set up shop they did not have it in stock either and could not order it.

Fast-forward to 2012 and my discovery of Amazon.com while trying to find some old songs, "Murder, He Says" by Betty Hutton and "Swing on a Star" by Bing Crosby, as mp3 downloads. (Amazon had 'em and I got 'em.) I found the Andromeda - Season 1 Collection (the boxed set just like the Season 3 I had) and I ordered it used from oldfaithfu77. It came quickly and was in the condition advertised, very good. I now have a lot of questions answered and I can't wait to get the Season 2 Collection.

As for the videos themselves, they were great! Every episode was action packed and laced with wry humor. I like Science-Fiction that doesn't take itself too seriously. The actor/crew profiles were good and added to the enjoyment of the collection. The bloopers reels were great. I would have liked to have had more on the technical side but maybe that will be with the Season 2 Collection. Overall, I would say this collection is well worth having, especially for Roddenberry fans, even if you don't get the rest of the series.[[ASIN:B0000DIZR6 Andromeda - Season 1 Collection]]
2 people found this helpful

st1000Reviewed in the United States on May 17, 2018
4.0 out of 5 stars
This is a good show.
Verified purchase
This is a good show... like a cross between Star Trek and Firefly.
One thing about this DVD: it works on a DVD player, but I couldn't get it to work on my computer. Cyberlink couldn't read the encoding.

With no better alternative available I would still buy it if you want to see series, but be prepared to have a second DVD player incase discs do not like your primary player.

Seth C. HowardReviewed in the United States on July 3, 2011
5.0 out of 5 stars
Andromeda , of korse ...
Verified purchase
As expected ; this is Gene Roddenberry's sci-fi show with Kevin Sorbo . It certainly is a "B" series type . The production scaled down often simpler than even original Star Trek . Still it is true to Roddenberry's socialist political stylings . However the "political" IS the story ; rebuilding what was destroyed and it is full of time warps , black holes & now 'white' holes and enough other sci-fi theories to keep some intellectual interest . If you are a "TREKY" , you will either be TIRED of too many similar themes over again , or you will ENJOY the twists of similarities .
The cast is varied and is much of the appeal . Kevin isn't "Hercules" and is almost "anti-hero" as so much of the entire cast is involved in each episode the show is far more interesting than one might expect . Of course AMPLE "eye-candy" involved for all without the overt sexuality as often as other shows . I think my personal interest is in the comedy ,but also in the plot "screw-ups" as crew mistakes turn into "whew ! we did it" .
The character lines are more "human" thinking than the attempts at the "perfect world" of the Star Trek series .
WEIRD , freaky creatures created as to be almost unreal and unbelievable except for the other wacky sci-fi characters of other shows & their characters .
The "religious" content is pooooooor , but for Roddenberry is a welcome placed idea ; this time "religion" isn't the ENEMY and in fact some reasonably placed Biblical ideas are tossed in .
NOW , if the series premier show doesnt grab you , keep watching thru as another episode will . The one point of part genius and part NEED , the episodes are connected and yet one can drop in and pick up the threads of plots & theme without missing them .
So , it's your turn .... BUY and review too
One person found this helpful
See all reviews
Back to top
Get to Know Us
Make Money with Us
Amazon Payment Products
Let Us Help You
EnglishChoose a language for shopping. United StatesChoose a country/region for shopping.
© 1996-2021, Amazon.com, Inc. or its affiliates