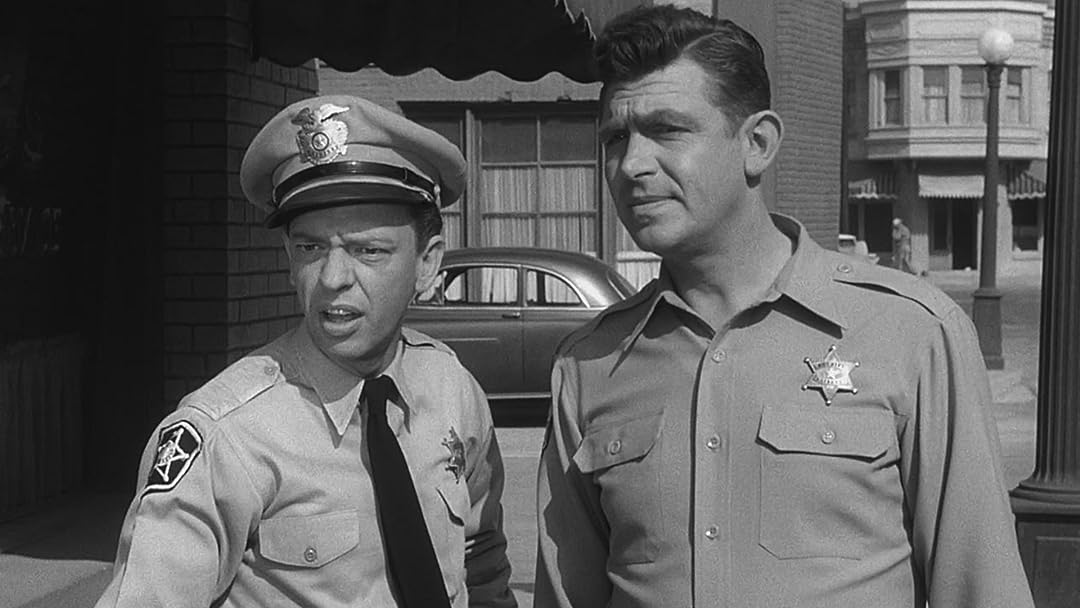 (2,024)
8.31961X-RayALL
A bona fide television classic, "The Andy Griffith Show" follows the gentle give and take of small-town Sheriff Andy Taylor (Andy Griffith), his son, Opie (Ron Howard), and all the other colorful characters who inhabit bucolic Mayberry, N.C.

swansongReviewed in the United States on August 15, 2018
5.0 out of 5 stars
Please release seasons Two through Five on Blu Ray
Verified purchase
One of televisions great shows from the sixties that was not only funny but provided important life lessons as well.

StephenReviewed in the United States on May 28, 2019
5.0 out of 5 stars
Blu ray Review - Is it Worth It?
Verified purchase
Andy Griffith Season 1 on blu ray - is it worth it? One word...YES! First, the episodes are much clearer and sharper than the DVD. The DVD isn't bad, but the blu ray looks really sharp. Good contrast, nice details, crisp image...details I have never noticed reeally jump out...it's just a pleasure to watch...PLUS...

EXTRAS: Season 1 has the reunion movie "Return to Mayberry" re-scanned in HD...so it is crystal clear as well. The Danny Thomas Show episode where Andy Griffith makes his first appearance as Sheriff Andy Taylor is included on this Season 1 box set. There is a nice interview with Andy Griffith. There are colored home movies taken by Ron Howard's parents of the filming and locations.

Finally, there is a really nice menu system that is cleverly constructed...makes you feel like you've strolled into Mayberry.

NOTE: When you choose to watch the sponsor spot's included with the episode, the sponsor portions are in SD (standard definition) HOWEVER, the rest of the episode is entirely in HD.

Just a couple of the episodes have a few seconds of SD footage in a scene here or there...but overall the Andy Griffith show has never looked better.

We're very pleased with this Season 1 blu ray release, and, even though I already owned that season on SD, I will never watch the SD version again. Here's hoping that they release they other seasons.

My copy of season 1 also came with a sleeve which has the same image as the blu ray box.

Watch as both Andy Griffith and Don Knotts develop their respective characters. There are some memorable and fun episodes in this season. Plus, this is the season with Ellie Walker. I always felt like she was a better match for Andy than Helen Crump whom I often found a bit "prickly" and stern for Andy's character.

One of the best comedic dialogues takes place between Andy and Opie in the episode "Opie's Charity"...look for it.

Once Don Knotts, aka Barney Fife, left (except for five fun guest starring episodes) for a movie contract after season five, the series changed directions and the focused more on the town of Mayberry and its citizens. These are easily distinguishable because they are the start of the colored episodes. While they tried to introduce a Barney replacement, Deputy Warren Ferguson, for eleven episodes in Season 6, the character didn’t take and the show shifted toward Andy’s relationship with Goober Pyle, Howard Sprague, Floyd Lawson, and eventually Emmett Clark, who replaced Floyd’s position on the show. The colored episodes are actually more Mayberry RFD than TAGS. While it was still fun to be in Mayberry, the last three seasons just are not as good as the first five.
29 people found this helpful

John BrumbaughReviewed in the United States on January 4, 2015
5.0 out of 5 stars
Simply The Best And Most Thorough Release Of This Show Yet
Verified purchase
Let me start with a little bragging: I scored this for $39.96, shipping included. Now, on to the review, which I will try to keep short yet informative.

Picture quality is just what you'd expect from a good HD transfer: grainy and awesome. Clarity and detail are more present than ever before, which is most noticeable in clothing, badges, nature scenes, and... well, just about anything with detail to be seen. It really is a thrill to see a show this old looking this nice.

Besides pristine HD transfers, there's something else this blu-ray offers that the previous DVD release lacked entirely: special features. Included are the original sponsor spots as well as the original end credits scene (with Andy and Opie walking away from the lake). Having been born in 1985, I had never seen those before, so that was pretty neat. Also included is the 1986 TV movie, Return To Mayberry, and an episode of The Danny Thomas Show titled "Danny Meets Andy Griffith" (both also remastered in 1080p). Finally, there are some home movies taken on the set of the show (in color, surprisingly), and an interview with Andy Griffith and his wife on CBS' Person To Person nicely caps off the special features.

That concludes my review. I already owned this season on DVD, but as soon as I saw a good deal, I upgraded to the blu-rays and gave the DVDs to my Mom. I'm very glad I did. Now, if you'll excuse me, I'm going to go watch this while I wait for CBS to announce a Gilligan's Island blu-ray release. (Wouldn't that show look amazing in HD? I think so.)

NOTE TO CBS: I wanted this and would have bought it MONTHS ago, but had to wait 'til I found a better deal on a used copy as your original price of over $70 was just too ridiculous. $45-50 would still have been expensive, but much more reasonable. I want and am patiently waiting for season 2, but if it's not more reasonably priced than season 1 was, I will pass on it, too, until somebody sells one used for under $40.
32 people found this helpful

PrimeOneReviewed in the United States on March 24, 2020
4.0 out of 5 stars
Just like the episodes on Netflix
Verified purchase
I ordered seasons 1 and 2 together. Season 2 came packaged well, but season 1 came in a huge box by itself, with no bubble wrap or anything. That’s why I only gave 4 stars. There was a small plastic bit missing from the case, but thankfully no discs were damaged.
They all play great, and I like that the date the episodes aired are next to the titles! This is a must have for any Andy Griffith fan.
2 people found this helpful

Liz AustinReviewed in the United States on September 8, 2019
5.0 out of 5 stars
Love these!
Verified purchase
I love this set. I grew up on reruns of The Andy Griffith Show and then recently started working my way through the seasons on Netflix... I soon decided I NEEDED this show on DVD. ;) I love this set, good quality, good packaging... Great show! Definitely the best choice for what’s currently on the market.. I now have the first three seasons on DVD all released through this distributor. No complaints, just happy nostalgia. I plan to grab the rest of the seasons as soon as I can!
One person found this helpful

Eugene B.Reviewed in the United States on August 26, 2019
5.0 out of 5 stars
THE ANDY GRIFFITH SHOW ON BLU-RAY
Verified purchase
This is such a great show. Paramount originally released season 1 on blu-ray on May 6, 2014. Since then there have been no more seasons of this show released. Why? How can you just tease us with the first season. If you are going to release the first season of a TV show, don't quit after the first season. Please release the remaining seasons of The Andy Griffith Show on blu-ray or even a complete series set. PLEASE KEEP GOING.

AmazoniacReviewed in the United States on July 10, 2012
5.0 out of 5 stars
A German "suffers" from Mayberry fever
Verified purchase
I was born and raised in Germany and still live there. But in 2007 I got the chance to go to the U.S. for four years to work there for my company.

One day I was zapping through the channels (gosh your television is even worse than in Germany, we only have commercials every 30 minutes during a movie) and suddenly I stopped zapping because I thought I had just seen Matlock as a young man. There he was, I saw Andy Griffith in black and white and sooooo young. I wondered because in Germany he is only known as Matlock, who is grey-haired and old already. The Andy Griffith Show has never been published (aired) in Germany or anywhere in Europe as far as I know. I did't know that Andy Griffith had a career before Matlock.

So I stopped zapping and watched The Andy Griffith Show for a while and I kinda liked it. Soon I set up my VCR to record all episodes. I was simply hooked! Of couse I bought all my favorite 5 seasons over Amazon already, I really don' t like the colored ones and I also miss Barney there. I wonder if Don Knotts ever regret to part from the show?

I find it amazing that I became such a huge fan, I mean I diddn't grow up in the States, I don't know anything about the sixties and the American lifestyle and mentality back then, but to me it is the most wonderful tv series for the whole family, a treasure, just timeless!

My stay in the U.S. was in the South so I got used to the accent very well, however I cannot share this tv - show with anyone of my friends or familyhere in Germany because the Southern accent is just too difficult to understand for them and there is no German language (synchronisation) available and never will be. I understand like 90 % of what they are saying and I wish there would be subtitles available since we don't have CC in Germany. At least then I would be able to read the words that I don't understand and then get the meaning or look them up.

So you guys here are the only ones who understand my passion!

and thanks for hours and hours of your everlasting and never dying work that (now thanks to Paramount) will be in our living rooms as long as we live!

.
12 people found this helpful
See all reviews
Back to top
Get to Know Us
Make Money with Us
Amazon Payment Products
Let Us Help You
EnglishChoose a language for shopping. United StatesChoose a country/region for shopping.
© 1996-2022, Amazon.com, Inc. or its affiliates