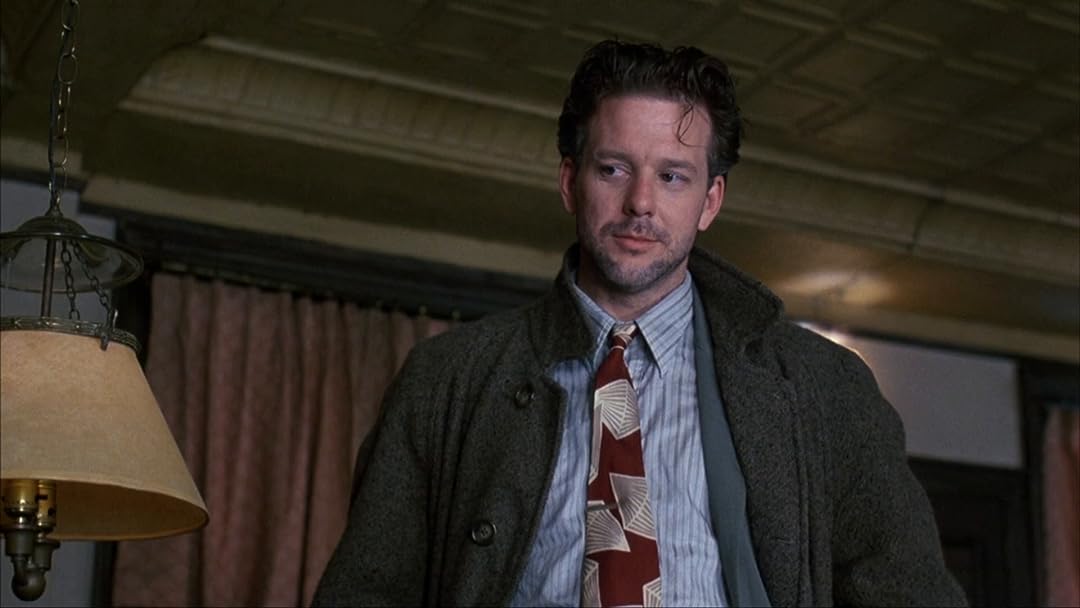 (2,513)
7.21 h 52 min1987X-RayR
The time is the 1950s: seedy Brooklyn private eye Harry Angel is hired by shady Louis Cyphre to locate a pop singer who reneged on a debt. Harry ventures into Harlem, the first step of a Heart of Darkness-inspired odyssey.

David KeppelReviewed in the United States on May 8, 2018
5.0 out of 5 stars
2015 Blu-ray IS the 113 minute, uncut version!
Verified purchase
There isn't much to say about this phenomenal occult thriller that hasn't already been said. So instead of reviewing the film itself (which, for me, is a top 10 all time film favorite) I thought I would clarify both the running time and the uncut status. Despite Amazon and the movie's cover both listing it as having an 89 minute running time, I can tell you that it IS the uncut version of the film, with a running time of 113 minutes. I don't know how or why that incorrect running time ever got out there but you can disregard it. I would also add that the Blu-ray transfer is excellent, as is the audio. This is the best that Angel Heart has ever looked and sounded and this Blu-ray is a must-have for any fan of the film. I am very enthusiastically thrilled with this release, with the exception of the inexplicable running time inaccuracy.
66 people found this helpful

joel wingReviewed in the United States on March 17, 2020
4.0 out of 5 stars
Starts as a detective story Ends up being a descent into hell
Verified purchase
Angel Heart blew my mind when it came out in 1987. It even inspired me to read the book that it was based upon. It is a story posing as a crime-detective drama, which is really a descent into pure evil.

The setting is 1955 where Louis Cyphre (Robert De Niro) hires private detective Harry Angel (Mickey Rourke) to find a former singer named Johnny Favorite. As soon as he starts on the case things begin to get weird. He hears voices in the air, the same tune on the piano gets replayed in the background over and over, and he keeps seeing a vision of an elevator. More importantly every person he talks to ends up getting killed. His investigation leads him to New Orleans where the plot thickens and more importantly gets weirder. Angel finds out that Favorite was involved in the occult, he ends up with a lover Epiphany (Lisa Bonet), and more dead bodies appear. When he ultimately solves the case it will shock you. If you watch the movie a second time you will catch a lot of foreshadowing hinting at the conclusion.

I don’t want to give any spoilers but this is an amazing film. When you see it, it will stick with you, and make you think of the story over and over. It begins like a detective case and then goes deeper and deeper into death, depravity, and a kind of hell. There are hints of Film Noir in the story as well. Rourke of course is a detective which was used throughout the genre. He is also a man up against the odds, although the ones he is facing no Noir character ever had to go up against.
C

Richard BallardReviewed in the United States on December 2, 2017
5.0 out of 5 stars
Too rich a banquet to be digested in just one sitting
Verified purchase
I've watched this film on cable TV, later on VHS cassette, and now on (better fidelity) DVD. Angel Heart somewhat resembles the film The Exorcist: the wealth of detail (the film wonderfully depicts 1950s Louisiana) can obscure the plot, but repeated viewings provide better understanding. Harry Angel (played by Mickey Rourke) is a smart-aleck private investigator who does the job while avoiding personal involvement. An eccentric client Louis Cyphere (played by Robert De Niro) seeks to locate an individual owing a long-standing debt. The search takes Harry Angel first to Harlem and then to Louisiana where he meets Evangeline Proudfoot (played by Lisa Bonet), a voodoo young priestess. As Harry Angel encounters more trouble at each step, Louis Cyphere smugly offers more money.

The DVD version contains two especially worthwhile extra features that interview New Orleans voodoo practitioners. A twenty minute History of Voodoo in New Orleans feature explains why voodoo is an integral part of New Orleans culture. A twelve minute Voodoo in the Media feature explains that Hollywood sensationalizes voodoo's potential for evil, and that New Orleans voodoo is practiced primarily as a benign religion. The two features are a worthwhile introduction to New Orleans voodoo, but remember that the practitioners being interviewed earn part of their incomes from voodoo activities. IMO the book [[ASIN:0943832225 Black & White Magic of Marie Laveau]] depicts the historically accurate range of voodoo activities practiced by Marie Laveau, the so-called Voodoo Queen Of New Orleans.
35 people found this helpful

MarkReviewed in the United States on October 29, 2020
1.0 out of 5 stars
Sick (and decidely unerotic).
Verified purchase
This should've been great. [**SPOILERS AHEAD.*** IF YOU HAVEN'T SEEN THE FILM AND WANT TO, PLEASE DON'T SPOIL IT FOR YOURSELF AND THEN ACCUSE ME OF SPOILING IT FOR YOU BY READING FORWARD. THANKS!]

Dismayingly, having created this spicy tossed salad and set up this tantalizing premise by adapting William Hjortsberg's novel, Falling Angel, director/screenwriter Alan Parker proceeded to deep-six the whole thing by perversely setting out to be as depraved and unappetizing as possible at nearly every story turn.

Why all the explicit, non-stop violence? Was it really necessary for the love scene between Mickey Rourke and Bonet - which many viewers were undoubtedly expecting to be titillating - to be so disgusting instead, with nauseating blood gushing down in buckets over their coupling? Was it necessary to add the proud little detail at the end that Epiphany Proudfoot was killed by a gun inserted in her vagina, a final, cynical f.u. from the director to his jaded, ticket-buying audience? Alan Parker is a sick bastard and a panderer.
12 people found this helpful

SactoTKReviewed in the United States on July 31, 2019
5.0 out of 5 stars
The best movie I've never heard of.
Verified purchase
Wow, what a thriller. Beautifully shot too. I couldn't have guessed the ending till the last 5-10 minutes. The flashbacks throughout the movie was intriguing, and I vaguely guessed it had something to do with Johny Favorite. It just didn't occur to me Johny Heart is Johny Favorite that he was looking for and the elder Krusemark is at the nexus.

You see a movie and it doesn't make sense here and there, but you keep making excuses; it's a movie so you suspend disbeliefs. There often are tons of that in suspense thrillers. There are none in this movie. If there were, it's all makes sense at the end.

Watch this film. You don't come out regretting that you wasted your time.
17 people found this helpful

Zachary LittrellReviewed in the United States on June 27, 2018
4.0 out of 5 stars
Atmospheric detective story delving into the occult
Verified purchase
Mickey Rourke is about the perfect actor to capture a sweaty Brooklynite detective tramping through the muddy streets of Louisiana, hunting a missing man for a very, very, very suspicious client. Robert De Niro is about the perfect actor to eat a hard-boiled egg with sophistication and quiet menace.

The twist was spoiled for me, but you'll probably start smelling the whiffs that something just ain't right with Johnny Fortune's story...or Harry Angel's. When Harry asks around about Johnny's whereabouts, too many people are both convinced he's dead, yet convinced they saw him not that long ago.

I'm not sure the end fired off perfectly -- the reveal is given at a breakneck speed, with hardly time to breathe or really digest what the hell is going on. But, I admire how the movie sticks true and firm to its greatest asset: atmosphere. The dark, ghoulish, and depressing air that infiltrates every scene -- even a scene at the beach is a dismal affair. The entire landscape screams at Harry that he needs to turn around...and of course he freaking doesn't.
16 people found this helpful

JoshuaReviewed in the United States on November 20, 2021
5.0 out of 5 stars
follow robert de niro for more hard boiled egg recipies
Verified purchase
He is also a fan of kentucky fried souls. Sorry if I spoiled it, he's the well hidden character "lou cipher" who has french tips on his nails and you think he's a normal guy but then you realize with shock and horror that it isn't a normal guy at all, no, its not even the devil, its just a has been actor ranting about social justice on twitter. Needless to say, this is a very scary film because of that and I wouldn't watch it with any children unless you're showing them their dead mom (and even then only if its your daughter that you just blew your 9mm load in).
The ending was super well done and not annoying at all. I was really glad about assistant production director sarah's contribution to this work and I'm glad the movie reminded me of her hard work when it did.
Also fair warning do not eat gumbo offered by anyone its a trap and is way overrated by hipsters.
One person found this helpful

Michael JReviewed in the United States on January 3, 2015
5.0 out of 5 stars
Creepy, fun, gruesome - what more could you want?
Verified purchase
Yeah, this is the movie that rumors say got Lisa Bonet kicked off the Cosby show by none other than Bill Cosby himself. And while the scene in question was, umm, intense (this is NOT a kids movie), Bonet, Mickey Rourke and Robert DeNiro were fantastic.In the spirit of the hard boiled detective movie, Rourke (who rocks as a 20s-era private eye) is contracted by DeNiro to find someone who owes him named Johnny Favorite - a musician. This leads Rourke to New Orleans where he runs face first into voodoo and Lisa Bonet as a voodoo priestess - which she just nails while being beautiful and very charming in her own unique way. The movie descends rapidly into the creepiest bunch of happenings and deaths you've ever seen which seems to dog Rourkes tail. I won't ruin it for you, but DeNiro just creeped me out more and more throughout the movie and with good reason. Just a superb movie that messes with you throughout.
19 people found this helpful
See all reviews
Back to top
Get to Know Us
Make Money with Us
Amazon Payment Products
Let Us Help You
EnglishChoose a language for shopping. United StatesChoose a country/region for shopping.
© 1996-2022, Amazon.com, Inc. or its affiliates