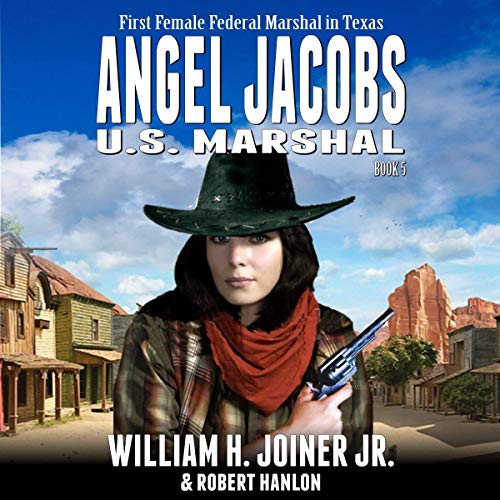 The fifth Western in a brand-new series from William H. Joiner, Jr. This is action, adventure and gunplay as only Joiner can write it! Ride with the author who gave you The Legend of Jake Jackson and Morgan Porter. You won’t regret it!

When she was seven years old, Angel saw her father brutally murder her mother. She was adopted by US Marshal Caleb Jacobs and his wife Bonnie. Angel didn’t want to be a schoolteacher like her new Ma. Angel wanted to be a lawman like her new Pa. Now she is a newly promoted Marshal and ready to take on the bad guys!

Outlaws and renegades didn’t believe US Marshal Angel Jacobs was for real. They learned the truth the hard way at the end of her smoking Colt. This book also includes three bonus stories!

Your audiobook is waiting!
Learn more about Membership
List Price: $6.95
You Save: $0.87 (13%)
By completing your purchase, you agree to Audible’s Conditions Of Use
Sold and delivered by Audible, an Amazon company

Linda A. Holifield
5.0 out of 5 stars She just keeps getting better!
Reviewed in the United States on August 28, 2020
I couldn't put this book down! Angel is a hero from the gate. She takes her commitment of protecting the citizens very seriously! I admire her fearlessness! Several other books are included. Her father's life history is included as well as many other favorites.
Read more
One person found this helpful
Helpful
Report abuse

Bob Byers
5.0 out of 5 stars Good read
Reviewed in the United States on March 30, 2021
Good read as.always . Lots of short stories about how the West was tamed . Can't wait for the next book
Read more
Helpful
Report abuse

EmileBeridon
3.0 out of 5 stars Where was Angel
Reviewed in the United States on September 11, 2020
The first short story is about Angel. The following short stories are about others. Disappointed by the title, it is misleading.
Read more
One person found this helpful
Helpful
Report abuse

David Smith
5.0 out of 5 stars Definitely Worth the Read!
Reviewed in the United States on September 15, 2020
Angel Jacob’s is back! I read the first 4 installments and loved them. I had high expectations for the 5th and it delivered! Definitely worth the read.
Read more
One person found this helpful
Helpful
Report abuse
See all reviews