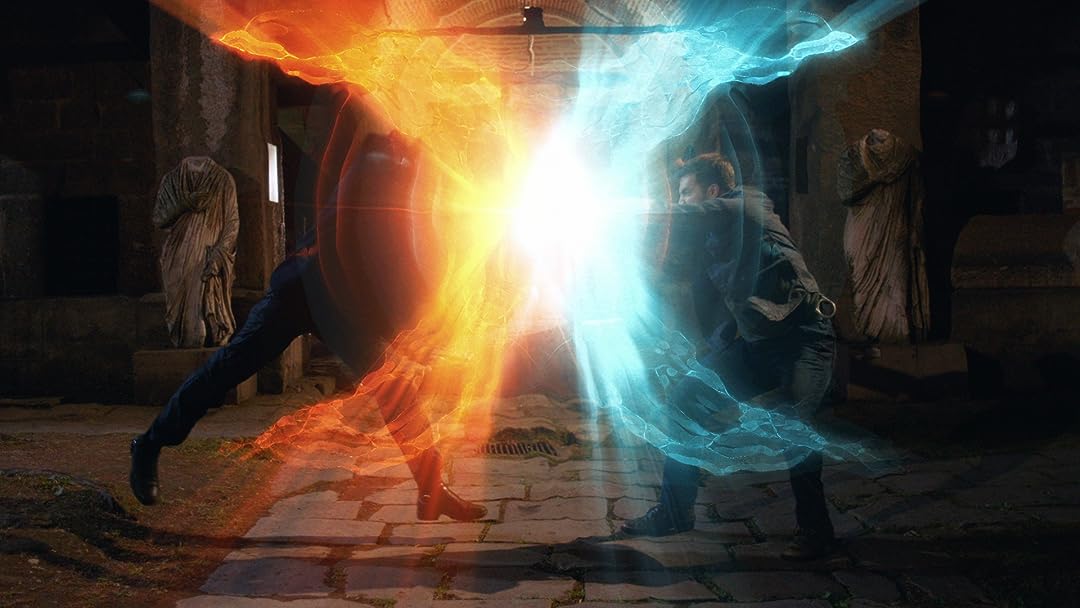 (643)
2.91 h 26 min2020X-Ray16+
Gabriel, a retired demon bounty hunter, returns to the dark land when his deceased wife's prophecy comes true that "four angels will come to destroy mankind", only to find a mysterious fifth angel that he must protect from a vicious demon horde.

agodReviewed in the United States on May 12, 2020
1.0 out of 5 stars
Yikes
Verified purchase
I couldn't get past 8 minutes of this. Terrible acting isn't worth my time. I mean, acting is a job. These people were at work when filming. If this were any other job, I'd be pissed that they were employed. I wanted to give it a shot because I love the subject matter but it was not at all given the justice it deserves.
16 people found this helpful

joe rReviewed in the United States on May 24, 2020
1.0 out of 5 stars
Kind of a higher budget you tuber webisode thing
Verified purchase
Each 'Prophecy' movie was progressively worse than the one before it. They wouldn't even let them put the name on this one. It does seem to be a ripoff of that franchise, though. Maybe "Prophecy' meets "the Expendables." And decide they don't like each other.
A bad one. Was there even a script? It seems like someone just told the actors in general what was supposed to happen and turned them loose.
Somebody did the CGI on their phone.
Disappointing.
I even hung on more than halfway.
No nudity up to that point...

SBC97223Reviewed in the United States on June 8, 2020
2.0 out of 5 stars
Interested Concept, Some Good Ideas, ZERO CONTNUITY, muddled plot.
Verified purchase
Angels Fallen has a down and out main character who we are trying to watch get his mojo back if I catch on to the major premise of this movie and he teams up with his old side kicks. The old side kicks come with baggage some good and some bad by the time we get to the end of the movie. If you missed those if the who murdered Eve in the end and the apparent father of the winged child at the end. So those elements get us two stars for a story line that reveals itself in the end. But the trip that we have to go through to get there caps this at those two stars. The rest of the details in Angels Fallen are all over the place, lack continuity, and just do not add to the premise above. One can watch this movie all the way through though so it is not as bad as the many negative reviews. It is just not a good movie and that may be the script needed tightening up before putting the final edit together.
6 people found this helpful

SuperDanReviewed in the United States on June 6, 2020
1.0 out of 5 stars
I hardly know where to start but I'll try to be brief
Verified purchase
There didn't seem to be a script that could be followed. They presumably expect us to know various things in advance of watching because there was some kind of backstory we really needed to know about. Not only bad CGI but lazy as hell effects. I mean you could see where the wiring harness was when one of them was picked up in the air. I THINK there was a bit that was supposed to be comedy but I really couldn't tell (a demon dancing or something...). These are things that I don't even notice on other poorly reviewed movies so you've been warned.
6 people found this helpful

UlshaReviewed in the United States on February 10, 2022
1.0 out of 5 stars
An ending that confirms how much of a waste of time this is
Verified purchase
If you want to enjoy this movie make your drinking game "I heard that you retired" and you'll be wasted before the end of the first act and passed out before the 3rd. Which is a good thing because this movie starts in B territory and jump on a greased slide past D into F grade.
Oh and Eric Roberts and Michael Madsen are trying to keep their SAG cards without doing another PurFlx cash in.
Special effects are instagram filters, I'm not being hyperbolic. The effects are overlay filters that wouldn't make the bar for tiktok. The closest to make up was the last fight scene they darkened up the eyes of two background actors because the filters can't work on mid or far shots.
Characters randomly appear, switch places (not flipped images), and disappear from shots. Whoever was responsible for continuity should be fired, into the sun.
Entire scenes are missing leading to awkward jumps needed to insert plot elements. At times you can actually tell if it's lost shot, bad writing, or they couldn't film it.
Stunts out of a classic Star Trek episode. The climax has a "earthquake" and every one pretends to stumble and crack effects appear over the scene, including several actors. I expected to hear a bucket clang if I went back and listened.
The limited budget show when one of the "angels" is a doll. A frikkin' victorian style doll and the hero actually gets in a struggle with it. This was the best laugh of the entire movie in a movie full of badly written horribly acted sidekicks that they try and push as funny. I'm pretty sure their, I'm going to say lab tech, was a failed comedian the producer knew and demanded he have at least 4 scenes.
The writing is so halfazzed our white male anglo-saxon lead, who used to be an exorcist, and wears a cross doesn't know who the 4 horsemen of the apocalypse are. /facepalm
The ending is complete and utter gibberish. The lead was dead but he wasn't but he was a ghost but he was alive but his spirit time traveled in his dead body which wasn't dead. Oh and the final battle was so anti-climactic I expected to hear South Park sound clip "meh, you guys suck" after the literal poke that ended it. Except he wasn't dead because stinger, he's alive until "she" dies, WTFLIPPINGF?!?!?!?!
The ending was complete a dog's breakfast of half baked pseudo deep nonsense. They clearly tried to string together a story but all they had was a series of ideas spat out like an 8yr old on a pixie stick binge.

The nudity is a single breast during an implied sex scene where there clearly was no sex and it felt it only existed gratuitously for the director and/or producer. I can tell she works in pron, I have no problem with that, and has some physical performance skills that could be better served as a stunt double, even if her acting is abysmal, but this scene felt dirty in how it was completely unnecessary and only existed for wank material for someone on the project.
One person found this helpful

Photographer &amp; DJ.Reviewed in the United States on March 30, 2021
2.0 out of 5 stars
Bad Acting
Verified purchase
I cry for every dollar wasted on bad acting. Every so often a low budget film will strike my interest and I can watch all the way through. This movie reeks of what's happening in the film industry of people whom care more about their appearance then learning the craft of acting. Its taking in a story line of biblical characters and giving it a cheap sifi action film make over with bad acting. Please stop taking good money and burning it with bad acting. I've cried every second that I watched this movie knowing another bill with Ben Franklins face was dyeing a slow painful death needlessly please don't allow these people to make anymore films. That money could have went to hungry children.
2 people found this helpful

M. T. RitzReviewed in the United States on December 17, 2021
1.0 out of 5 stars
It's bad.
Verified purchase
This movie just is bad, and NOT in the "camp" way a lot of movies in this genre are. There are a lot of movies and series out there are about demon/fallen angel/vamp/ other bad creatures of the night that look like humans but are not. If you are going to have a movie in this class you need to describe what your idea of what it is, like how do you kill demons in your creation, are angels good or bad, how they are related to demons. Also, make sure we know if the leading characters are (at least basically) human. The description is vague, "demon bounty hunter" could mean he is a demon himself, and it took a while for me to know if that was the case or not. If you do get over an hour in, the last scene where the "good guys" or in the boat look what characters are there. There is 1 that shouldn't be, wasn't there a second before, wasn't there in the next scene. It was just bad.
One person found this helpful

E. BarneyReviewed in the United States on May 29, 2020
1.0 out of 5 stars
Very bad in almost every way
Verified purchase
The synopsis reminded me of the tv show Supernatural so I thought I'd give it a chance. I watched about half of this movie before I felt like I would be stupid if I wasted another second on it. It's never good for a movie to be compared to a CW tv show but the movie is FAR worse in every conceivable way. Acting, lighting, sound, camera work, casting, writing and special effects are all no where near as good as the worst episode of that tv show I mentioned. Not even remotely close.
3 people found this helpful
See all reviews
Back to top
Get to Know Us
Make Money with Us
Amazon Payment Products
Let Us Help You
EnglishChoose a language for shopping. United StatesChoose a country/region for shopping.
© 1996-2022, Amazon.com, Inc. or its affiliates