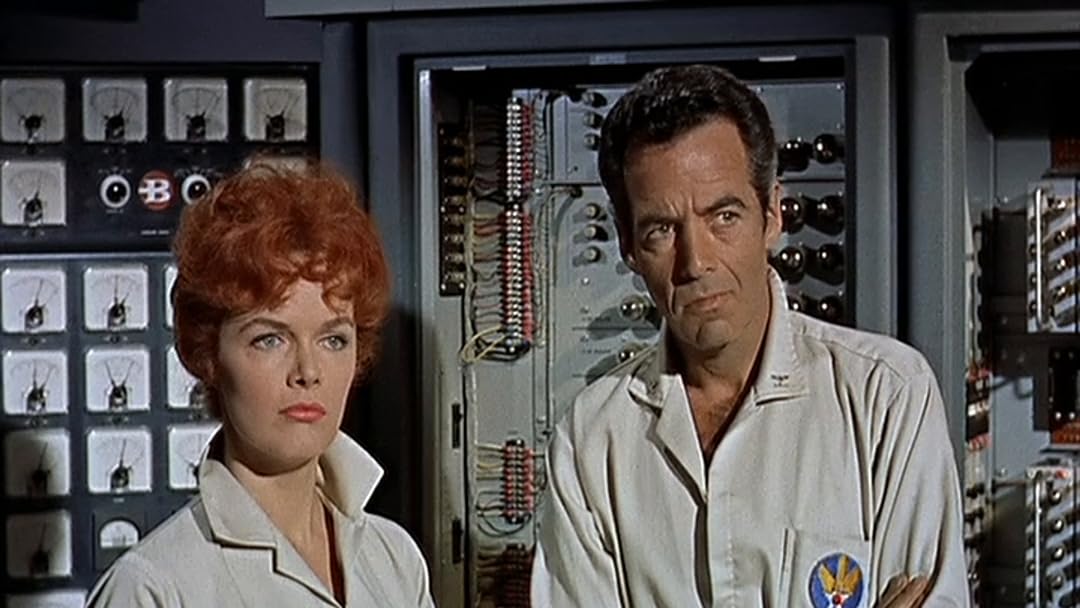 (471)
5.31 h 23 min196013+
A science-fiction tale of an expedition to the "angry red planet" of Mars...running into all sorts of alien terrors, including unfriendly Martian plants and a terrifying kind of giant mouse/spider hybrid.

JP FishReviewed in the United States on September 28, 2017
5.0 out of 5 stars
A minor classic that surely inspired the super special effects epics of later years.
Verified purchase
Impossible monstrous fun! The art direction is bold and insane at the same time. To our jaded eyes the camera trickery might seem obvious. The script and some of the performances boarder on painfully inadequate. But there is a childish dream like quality to this film that makes it irresistible to the Sci Fi fan or film historian. With Star Wars and Alien roughly a decade away, Angry Red Planet was a singular adventure of child like simplicity and ambition perhaps beyond its means. None the less, there has never been anything like it attempted in quite the same surreal way. You either love or hate this one. I would give it at least two more stars if they would let me.
19 people found this helpful

MamboReviewed in the United States on May 18, 2018
5.0 out of 5 stars
Glad I did
Verified purchase
Took a chance and bought the Blu Ray transfer made by Shout Factory. Glad I did, the quality is great and the audio a lot better than the original dvd transfer. Shout Factory does a better transfer than the Hollywood companies. Yes, the movie has a very simple story and is cheesy but that it what the "B" movies were. They were low budget and intended for you to just enjoy and have fun. This movie was done in 10 days and the film was bleached with a new experimental technique to give it the red tint and glow you see in the film. I've seen worst modern movies with worst stories but with bigger budgets and better special effects that were not available back in the day. There was so much creativity with "B" movies in the 1950's. Simple, cheesy but fun to watch. Wish they still made them that way. All in all, fun to watch and enjoyable.
12 people found this helpful

Max FabienReviewed in the United States on October 1, 2019
4.0 out of 5 stars
An exercise in the suspension of disbelief
Verified purchase
As a kid, I was enthralled when I saw this movie during it's initial theatrical release in 1960. Seeing it now, It's still enjoyable as a piece of nostalgia from my youth. The special effects, pretty good for the time, are not as effective now, based on today's standards. There are several flaws that initially went unnoticed, which cause a few unintentional chuckles now. Examples: Whether the spaceship is flying through space horizontally or is landed in a vertical position, the interior is always seen as level with the crew walking around upright, and with apparently no effect by zero or reduced gravitational pull. Also the uniform jumpsuit on the lone female crew member (Nora Hayden) is designed to be form-fitting with a turned-up collar and her hair is worn up always freshly coiffed. The lead male crew member (Gerald Mohr) wears his jumpsuit opened half way down to show off his hairy chest. But enough fun criticism. The movie is a good Saturday afternoon popcorn movie. The exterior planet scenes are filmed in "Cinemagic" giving them an eerie sense of unknown fear as the crew gets attacked by carnivorous plants, a giant bat/spider creature,and a devouring blob. It's definitely not "2001" or "The Martian", but if you allow your suspension of disbelief to take over, it's a fun and enjoyable trip.
4 people found this helpful

Niccolo DonzellaReviewed in the United States on March 22, 2020
1.0 out of 5 stars
Where to Start
Verified purchase
First, this rating is meant to measure it’s worth as a film. If I were rating this for my admittedly base purpose for watching it - the sheer fun of consuming popcorn, wine, and heckling the actors while “sheltering in place” on a cold Sunday afternoon - then it’s a five. According to the details, it took nine days to make and $200,000. My kind of heckle-fest. These actors barely convince you that your TV is on. Two of them were very successful radio actors, Gerald Mohr, and Jack Krushin. The other two are unknown to me. Believing that these four could have landed jobs in maintenance at any kind of Space agency is a stretch. Scientists? Right. Each one has been given a standard character type left over from WWII era B movies and radio and each of them heroically underperforms. Chin whiskers and a pipe equals a “professor” sublimely unaware of anything remotely scientific. Krushin’s tiresome comic relief, honed in radio and useless on the screen, including a troubling relationship with a ray gun of some sort that he’s personalized as a woman, mercifully ends when he’s consumed by a giant amoeba. For reasons entirely understandable, this demise draws less emotional reactions from his fellow crew members than any of the silly blinking lights on the fake control board. Mohr moves about on exploration visits with an apparently loaded 45, finger on trigger, waving it in the direction of his fellow crew members like maybe it’s a flashlight or something non-lethal. (Was that actually in the script?). Dr. “Irish” Ryan demonstrates her bona fides as a scientist by playing, quite literally, with beakers and test tubes. The “rocket” interior is an office with a few faux tech pieces of nonsense. Gravity rules, if not in the script and performances, then in the office. You can stroll around, shave with an electric razor, and, most memorably, smoke a pipe right next to the high-tech sensor indicating oxygen consumption at just two levels - normal and excessive. Like the idiot military authorities on Earth, everyone believes that the best possible way of confronting danger or the unknown is to charge right out into it and see what happens. Accordingly, they learn absolutely nothing from their failures, an endearing quality in a scientist. Finally, there is the booming, echoing Martian voice bidding us to stay away. He’s better understood as a viewer warning you not to waste your time and money. Since it’s free on Prime, and since you need some diversion while sheltering in place, I’d ignore him.
3 people found this helpful

James C SmithReviewed in the United States on March 28, 2020
2.0 out of 5 stars
Zero Charm
Verified purchase
Many of these older B&W sci-fi movies from the '50s have a charm or allure to them for various reasons. Imaginative premise. Excellent story. Eery cinematography. Memorable dialog. Classic monsters. Corny love story.
Suspense and thrills. And most importantly, capturing the feel of that era in history.

This film pretty much fell flat in every single one of those categories of providing that brand of entertainment. The main characters were not endearing and were played by marginal actors. The story seemed to be written by a high schooler, with little or no real drama at any point. The special effects... I'll get to that. The use of color seems to be the final blow gutting this of all possible charm.

CineMagic was a fraud that the producer doubled down on by first creating it as a means to cut the special-effects corner in a major way, then heavily touting it in the trailer as something new and amazing. It was basically the combination of using highly obvious hand drawings for the Martian scenery, with some type of red-dye wash on the film itself.

The only positive thing that I could see in this money-saving ploy is that it may have inspired the look given to human faces in the original Tron movie, which is a favorite special effect of mine still to this day.

As for this movie, I could go on and on in dissatisfaction, but that would be putting more into it than the producer did. Suffice to say, this film left me flat.

CeedReviewed in the United States on September 1, 2018
4.0 out of 5 stars
So 1950’s! Wonderfully Campy!
Verified purchase
Angry Red Planet:
Funny/Sad: they often refer to female scientist as The Girl, have her prepare dinner, unprofessional male 50 era flirting, They show only her using an IBM ? typewriter ( like a secretary) , an-astronaut reading old sci-if mag with sexist overtones, lots of reel to reel computer tape machines, and as usual, no one ever considered WIRELESS microphones, Interesting Elon Musk landings, tail first on land, believable electronic consoles for 1959, no speedometers in cardboard cases here-
they spent a little money, love the steel high school lockers in the spaceship control command center, and the men are wearing crew socks and loafers with jumpsuits,one unzipped to show off chest hair🙄, love the scientist with pointy beard, smoking his pipe on board! Comments about spacesuits not designed for beautiful dolls🤪, this is before they get to Mars! Actually like this movie despite sexism, sadly those things were acceptable then.
6 people found this helpful

Keith DReviewed in the United States on July 4, 2017
5.0 out of 5 stars
Angry Red Planet has never looked better than on this Blu-ray release!
Verified purchase
The Angry Red Planet looks absolutely great on Blu-ray! This Sci-Fi B has it all: genre veterans Gerald Mohr & Les Tremayne, Nora Hayden, who screams & faints a lot but ultimately saves the hero in the end, Jack Kruschen with his sonic freeze gun Cleopatra, the bizarre CineMagic process itself, and, of course, the giant Bat-Rat-Spider, arguably the coolest low-budget monster of its day. Great fun!
11 people found this helpful

M. StandishReviewed in the United States on April 1, 2020
3.0 out of 5 stars
What this film needed in the worst way possible was a director not afraid of human emotion!
Verified purchase
Flying to Mars was so simple and uneventful. Plus there was no weightlessness to deal with, and talk about room! The ship had tons of it -- with nearly all the comforts of home. No stress, no strain. Everyone was always happy and on an even keel. Everything was so pat and routine for the most part. Thankfully, there were some good sets and some surprisingly good special effects that helped to give the film a much-needed kick in the overalls. However, a juvenile script combined with dreadfully uninspired directing and flat and emotionless acting ultimately doomed this film to mediocrity. Still, considering when it was made and what we knew about space travel at that time, it was a reasonably slick and offbeat effort to entertain. The intense and unique colorized scenes on Mars probably looked pretty impressive on the big screen, and if the truth be known, are probably about the only thing most viewers remembered about the film two weeks later.
One person found this helpful
See all reviews
Back to top
Get to Know Us
Make Money with Us
Amazon Payment Products
Let Us Help You
EnglishChoose a language for shopping. United StatesChoose a country/region for shopping.
© 1996-2021, Amazon.com, Inc. or its affiliates