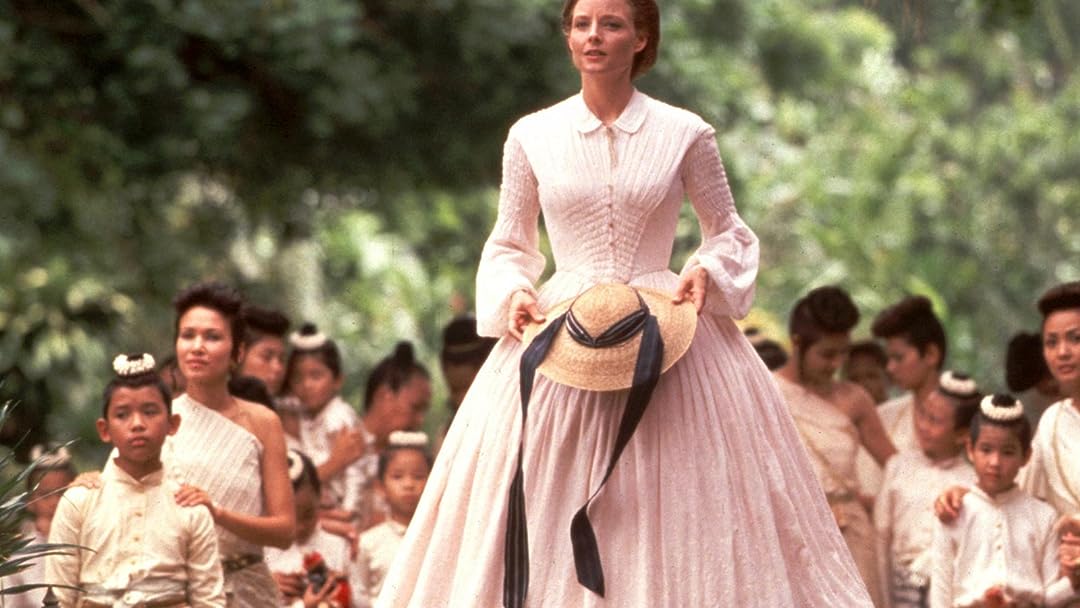 Anna and the King

(3,464)
6.72 h 28 min1999X-RayPG-13
Based on the true story of Anna Leonowen's an English school teacher, a window and mother who moves to Siam with her son, in the 1860s to teach the dozens of children of King Mongkut. An unexpected romance between Anna and the King, but cultural differences keep their love apart.

DEWEY M.Reviewed in the United States on January 25, 2016
4.0 out of 5 stars
"THE EQUAL OF A KING: "ANNA AND THE KING" (1999)
Verified purchase
20th Century Fox certainly got a lot of mileage out of the story of "Anna And The King of Siam." First, there was the 1946 version with Irene Dunne and Rex Harrison. This inspired Rodgers And Hammerstein's magnificent musical version "The King And I", brought to the screen in 1956 starring Deborah Keer and Yul Bryneer. This incarnation stars Jodie Foster and Chow Yun Fat. For some reason, this beautiful 1999 version remains critically under-rated and vastly under-appreciated. The basic plot in all versions is fascinating fiction, based on certain "factual events," concerning the confrontational and complex relationship between British schoolteacher Anna Leonowwens and King Mongkut in 1860's Siam.
The casting of British Rex Harrison as the King Of Siam in the 1946 version is Hollywood preposterous. There's never any real emotional connection between Harrison and Irene Dunne. Deborah Kerr and Yul Bryneer played things more beautifully and brilliantly in "The King And I." The production is marvelous, if obviously studio bound. Here, Chow Yun-Fat is every bit as commanding and charismatic as Yul Bryneer. This King is more human and, as Chow Yun-Fat is actually Asian, probably more authentic as well.
"Anna And The King" plays less like "The King And I" and more like a David Lean epic ( I am mostly thinking of "A Passage To India") from a movie era gone by. While certain plot elements remain in all versions, this version takes the story in some surprisingly different directions. In terms of approach, the musical "The King And I" is about how Anna changes Siam. This "Anna And The King" is about how Siam changes Anna. Played by Jodie Foster, Anna is extremely high-minded and sure in her belief that "the ways of England are the ways of the world." Many of her smug beliefs and values are thrown back in her face after she meets King Mongkut and the people in his palace. By the time of the lavish "anniversary party", thrown mostly to impress the British, Anna is appalled by her country's prejudicial and unfriendly attitudes towards Siam. On a personal level, the King correctly guesses that Anna is so out-spoken and headstrong because she has not yet accepted the death of her husband Tom. She hides her pain behind a wall of "superior British strength." Still, she fights against several social and human injustices. Her manner does not sit well with the Prime Minister who says, "There has been much insult caused by this Englishwoman who thinks herself the equal of a man." A fascinated Mongkut replies, "No, the equal of a King."
There is nothing studio bound about this production. It was filmed on location in Maylaysia. Filming in Thailand was denied because any version of this story is considered controversial and disrespectful to the memory of King Mongkut, making it appear he was dependent upon advice and support from his British Schoolteacher employee. Ironically, the film confronts that issue head on. Anna totally over-steps her position when she tries to save the slave Tuptim (Bai Ling) and her lover Balet (Sean Ghazi) from death. The King can do nothing to save them because Anna has made it appear, in public court, no less, that he takes orders from her. Tuptim and Balet must die in order for the King to "save face" and command authority.
In addition to all this drama, there is added political danger. General Alack attempts a political coup by forcing a war between Siam and Burma. Alack kills the King's brother and several other innocent people, and he plans to kill King Mongkut and all of his wives and children. After the deaths of Tuptim and Balat, Anna prepares to leave Siam. This new danger, however, brings her back to the palace one final time.
Critics complained about Jodie Foster as Anna, and the film's length. I couldn't disagree more! At 2 hours, 26 minutes, the film IS long, but, for me, always absorbing and often heartbreaking. Jodie Foster and Chow Yun-Fat are both brilliant in the leading roles. DVD Extras include a Making of Documentary, 5 production featurettes, a music video, deleted scenes, and audio commentary by director Andy Tennant.

MelReviewed in the United States on January 3, 2021
5.0 out of 5 stars
This is 1 of my all time favorite movies
Verified purchase
This is one of the better movies ever made. It is on a grand scale. The acting is incredible by everyone. Jodie Fosters character goes to Siam in the mid 1800s to teach the kings children all while the kings enemies are trying to remove him. The king & Jodie Foster's character fall in love but cannot show it. It has a lot of action but is a love story as well. My husband & I both love the movie. The music is amazing but it is not a musical in any way.
2 people found this helpful

JorinReviewed in the United States on June 3, 2022
5.0 out of 5 stars
Great movie!
Verified purchase
I’ve wanted to watch this movie for a while. I love Jodie Foster, but the original movie with Yul Brynner and Deborah Kerr is one of my all time favorites. So, i was definitely a little skeptical about this remake. Well, Jodie Foster never disappoints. Although a remake, they didn’t try to do it exactly the same. It was the same story, but a different retelling. It was absolutely wonderful. You won’t want to miss this one. You won’t be disappointed!

Amazon CustomerReviewed in the United States on April 25, 2013
5.0 out of 5 stars
Worthy of viewing again and again
Verified purchase
Filmed in Indonesia, it reflects the beauty seen there and the unique splendor. The acting is superb. The raw talent of Jodie Foster carries through every moment and the charisma and acting of Chow Yun-Fat are outstanding as well. The script is well written and played with many other characters who distinctly add to the story theme and overall quality. While, in reality, Mrs. Leonowens wrote her original memoirs with a bit of exaggeration in terms of her importance to the Siamese Court, this adaptation is pure pleasure to watch. The unspoken romance and human interest elements are realities of that time. Given the predominance of English rule over so much of the world during that period, it is interesting to see how that is dealt with in the movie. The recognition that English feeling their superiority over other cultures and having that recognition seen as well as colonialism for profit addressed added depth to the film. Very enjoyable film. I've watched it several times and I'm glad because I see an added depth or detail with each subsequent viewing. I'm happy to see this genre leave the Yul Brenner stage behind and move in a newer direction. Chow Yun-Fat is an outstanding actor and a good man from all I've read. There truly is something to be said about Buddhism.
5 people found this helpful

Lin BeeReviewed in the United States on July 14, 2015
2.0 out of 5 stars
Buddist Propaganda only in my opinion
Verified purchase
I am going to join those critics who give this, supposedly based on a true story, movie a low mark. I read the 5-star reviews and decided to rent it. I sure wish now there was a button that gives me my money back and my time. It was pretty bad especially Jodi. It weakened her overall star performances of the past. All Chow Fat did was either smile charmingly or shout irritatingly. He did no real acting. I think of "The Last Samari" with Tom Cruise. This was a movie to make money only but I can't see how history buffs of Thais/Siam could handle such nonsense. Foster is miscast and Fat is just not himself here though good looking but way too young for the part as King Mongkut was old (60's). I thought the beheading scene was awful and then to see the King weeping before their false idol Buddah was weak when he could have stopped the false charges against these two lovers with just one word. But we don't even know if that really happened. I suppose there were such injustices like that because the next king, his son, put many reforms in place and the justice system being one. Good for him. Well, that's about it. I came to this review for these reasons: obvious lies, miscast actors, silly dialogue and fake looking scenery. Two stars and this is generous.

minktoyReviewed in the United States on January 13, 2014
5.0 out of 5 stars
Jodi Foster will never disappoint you with any kind of movie she plays.
Verified purchase
Jodi Foster is a fantastic actress !! In her career, she has been able to play any character in a and has never become a stereotype cast playing only one kind of movie. She can play any part and still be the best where many stars have only been typed cast for one one kind of drama. I've had this movie on VHS before I went DVD and it's a movie classic that has been added to my library. I love Jodi Foster. She is a gifted and talented actress who pulls at your emotions. This drama is action packed, it evokes emotions of the anger, heartbreak, despair, shows her courage and strength and as a widow, mother and a school teacher, and faces unwavering conviction and a resolution to stand up against the oppression in a culture of that time. The sad happy ending is that the King falls in love with her admitting he never thought it possible to love only one woman, of whom he had many wives and concubines. Excellent movies, and this is one of them, you can't seen anytime soon because the movie stays alive in your memory. If you did, you'd already know what was going to be said or happen, and that takes away from the suspense of not knowing. I always give Jodi Foster the highest of ratings : )
3 people found this helpful

Kindle CustomerReviewed in the United States on January 1, 2022
5.0 out of 5 stars
Beautifully done.
Verified purchase
I watched this years ago when it first came out but haven't seen it since. I bought it for my husband for Christmas. We watched it together recently. I had forgotten how beautifully done it was. From the acting, the sets, the costumes, the pagentry and the story, it was beautifully done.
See all reviews
Back to top
Get to Know Us
Make Money with Us
Amazon Payment Products
Let Us Help You
EnglishChoose a language for shopping. United StatesChoose a country/region for shopping.
© 1996-2022, Amazon.com, Inc. or its affiliates