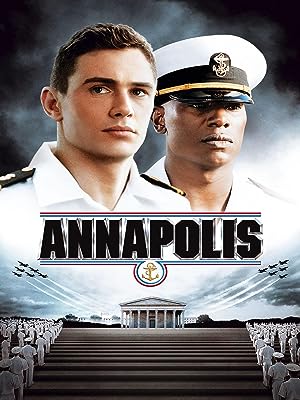 Creativity SageReviewed in the United States on April 15, 2017
1.0 out of 5 stars
Annapolis was irrelevant — a bad boxing movie.
Verified purchase
Terrible! Nothing real about it. The outline follows and parallels an "Officer and a Gentleman" but poorly.
Raised by an unsupportive father after mother's death
Not really qualified — only determined
Angry loner who doesn't understand teamwork
Assaults a superior officer
Defiant of authority
Best friend attempts suicide after being dropped from Academy
Way behind class in Academics
Causes trouble for class mates
Publicly fights superior officer who appeared to be the enemy but ultimately makes him an officer.

Also poor versions of themes from Rocky, North and South, Coach Carter, and other good movies.

Not filmed at Annapolis. There are no ship yards anywhere near Annapolis — the movie shows the lead character sitting and looking at his home — a shipyard in Philadelphia more than 90 miles from Annapolis as the crow flies.

The main topic of the movie is boxing. The parts about the Naval Academy are totally unrealistic and unimportant to the movie.

The boxing scenes looked like 3D animation. Mostly showing closeups of fast and furious punching. The lead character gains 35 lbs in a few days by eating junk food while training vigorously so that he can fight his superior officer as a heavyweight. Get real!!!

Never At A Loss For WordsReviewed in the United States on December 1, 2019
2.0 out of 5 stars
Bad idea from start to finish.
Verified purchase
Silly and contrived plot (working class kid makes the big time and has to adjust by teaching his superiors a lesson or two). Complete waste of time. Whole premise ridiculous right out of the gate, as that's not even how a person gets into the Naval Academy, or drops out of it, for that matter. All sorts of wrong about this movie.

The acting is bad, the plot predictable, really nothing to like about the main character. As for the side-kick: what sort of kid would do everything it took get into the USNA, represents his poverty-stricken community so well they give him a parade before he leaves, and then can't keep from smuggling in junk food? What kind of friend would allow said kid to dedicate himself to the main character's boxing success but fail to do the same for his friend? "I just want to up my weight class so I can pummel our commander legally, but you'll get kicked out if you don't do the course in the allotted time. So, you know, let's concentrate on the boxing thing because that's so much more important than your success."

Absolutely absurd. Almost as absurd as all their roommates just deciding to move out when they get fed up with the losers' shinanigans. Did anyone do *any* research before they started to make this movie?

Don't watch this if you're curious about what it's like to attend the USNA. Better yet, just don't watch it.
9 people found this helpful

Cusomer1kReviewed in the United States on March 20, 2021
2.0 out of 5 stars
So many missing transitions and plot points.
Verified purchase
This was like half a movie. I don't know how the script could have been accepted or perhaps they had to little money and the director didn't know how to deal with that. Plot points that are needed to make it int a ballad were completely ignored and so transitions between scenes in seeral spots seemed like i needed to say "wait .. what .. did I miss something!!!" I was expecting something akin to An Officer and a Gentleman, but it totally disappointed. And Franco's performance was very lax and the casting and directing had other very sad results. I HATE WHEN PRIME GIVES 4 AND 5 STAR RATINGS SIMPLY TO MISLEAD US INTO SELECTING SOMETHING WE SHOULDN'T SPEND OUR TIME ON. ..... That's my opinion.
6 people found this helpful

TCReviewed in the United States on April 5, 2021
1.0 out of 5 stars
Dumpster fire!
Verified purchase
I actually sat through the whole thing, but only because I was trying to understand its 4 and 1/2 star rating. But alas, it ends like it started, complete trash. Offensive trash, focused on a character that is romanticized, rather than beaten down as he should have been. Sure, he can go in ignorant learning along the way. But the movie justifies his behavior instead, behavior that in no way would have been tolerated in such an establishment. Romance with his superior? Are you kidding me!?

Thomas G.Reviewed in the United States on April 16, 2021
1.0 out of 5 stars
Needed a Technical Advisor
Verified purchase
It needs to be a rule that to make a movie about the military you MUST have a competent technical advisor and a costume designer with a clue. They kept referring to Donnie Wahlberg's character as a Lieutenant, yet he wore Lieutenant Commander insignia. He even referred to himself as a Lieutenant.
That was just one small area where technical advice should be mandatory. No time to hit the myriad of other technical issues.
5 people found this helpful

PiperReviewed in the United States on March 16, 2021
1.0 out of 5 stars
Dumpster Trash
Verified purchase
They would have to work to make a worse military academy flick. Wow. Where's the hustle. Where's the atmosphere? Where's the polish?
7 people found this helpful

paulsallReviewed in the United States on April 19, 2021
3.0 out of 5 stars
It's a boxing movie taking place at Annapolis
Verified purchase
Usual characters: fat guy who can't make it physically, lying-cheat guy exposed by straight arrow by the book guy, hard nosed company commander guy who wants to protect integrity of Annapolis. Like Rocky goes to Annapolis; however, the plot is thin and not realistic. Franco's love interest - such as it is - is an officer. If you like boxing and/or James Franco, you'll probably like the movie. I did like the ending
2 people found this helpful

JeremyReviewed in the United States on April 10, 2020
2.0 out of 5 stars
a boxing movie set at the Naval Academy
Verified purchase
Most of the plot focuses on boxing, with some Navy trivia thrown in. Trailer is misleading with brief clips of Navy action that aren't even included in the movie at all.
6 people found this helpful
See all reviews
Back to top
Get to Know Us
Make Money with Us
Amazon Payment Products
Let Us Help You
EnglishChoose a language for shopping. United StatesChoose a country/region for shopping.
© 1996-2022, Amazon.com, Inc. or its affiliates