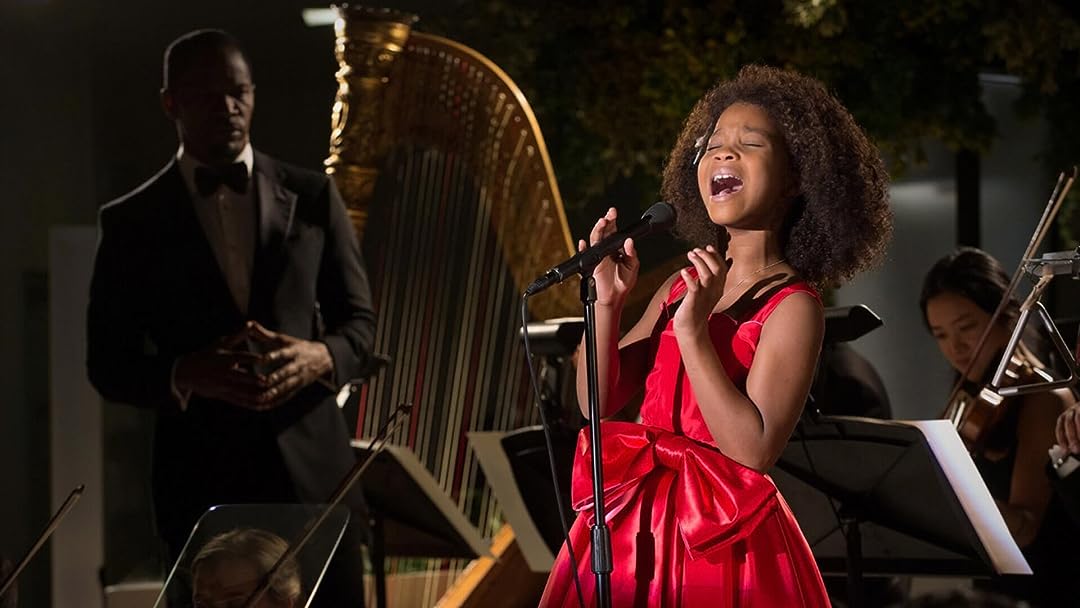 Jay Jay Reviewed in the United States on July 17, 2017
4.0 out of 5 stars
Great family movie
Verified purchase
Did not want to watch this. I'm forty years old and the only Annie to me is the early 80s one but since I forced my 11 year old to watch that version with me, she made me watch this newer version with her.

I found that I really liked it despite myself. The main actress is adorable and very likeable. I hope she has a long career in front of her. The supporting cast is talented. The updated story is believable. I found myself smiling and actually being really into it.

It's not a carbon copy of previous Annie's. Its an updated version that fits right in with today's society. I'm glad I let myself be talked into this.

Miss JReviewed in the United States on May 5, 2020
5.0 out of 5 stars
toddler loves this movie
Verified purchase
she loves most musicals, but a movie with a lead character that she can identify with and see herself as makes her day! She watches this movie almost everyday, she's memorized the songs, and imitating the dance routines. Typically by now as a mom I'd be frustrated, but I enjoy watching the movie with her. It’s a modernized update of a very old classic, she wouldn’t even watch the original. She literally took her dolls and went to play on the other side of the room.

Some other reviewers mentioned cursing?? I must have missed that because I didn’t hear any. “Damn?” Maybe someone said “damn” in anger. I loved Cameron Diaz’s take of the Miss Hannigan character. (Remember, while it’s a remake, the actors are not trying to IMITATE the previous versions, they’re giving their perspective of how they see those characters in the 2000s) and yes, Hannigan would be a closet drunk and functioning moderate pill popper. She has no job, single, & survives in NY off the money she gets from her hustle as a foster mom, she has ISSUES. Oh yeah, and she used to be an up and coming celeb who was canned right as her career was taking off... she’s going to be a drunk. Lol! BUT my 9yo niece BARELY picked up on the insinuations, my toddler fed didn’t. There are no rose colored glasses on foster care here. It felt pretty realistic. I didn’t compare it to the original 1930s version, or even the 1980s one, and I think that’s where some people go wrong. (by the way, in the 1930s version the ids insinuate that Hannigan is a closet drinker.) But this version is not trying to be any of the previous variations, and that’s why the beginning gives you the scene with the white girl named Annie who is VERY 1930s-80s Annie and then flips it and shows, this ISN’T her story, it’s going to be a twist.

Erica MReviewed in the United States on May 15, 2016
4.0 out of 5 stars
This is a great update of a classic movie
Verified purchase
This is a great update of a classic movie. My 4 year old and 7 year old daughters love this movie and I've seen it about 6 times in the past 2 months. We need more movies with black girls people!!! We watch it constantly because Quvenzhane has skin like my girls and hair like my girls and we all love seeing that reflected in their entertainment. Even after watching it over and over, this movie still holds up. I love the modern updates to It's A Hard Knock Life. The changes to Tomorrow make it a more wistful song and less upbeat which is super appropriate for a movie like this - it's foster care people! The new song, Opportunity, is fantastic; one of our all time favorite songs. Watching her perform it for the first time was a bit of a tear jerker. I know most of this is about the music. But after all, why else are you watching a musical if not for the music? Cameron Diaz probably wasn't the best choice for her role as Ms. Hannigan but she didn't ruin it. I liked all the other cast choices. Probably the worst part of the movie is Rose Byrne's super awkward/cheesy dancing. But, it's not a deal breaker.
34 people found this helpful

K R TReviewed in the United States on June 28, 2018
5.0 out of 5 stars
I liked this version better. Modern sweet movie.
Verified purchase
I, too, admit I was not a big fan of Annie the musical.
This version is more modern and I really liked the story and the songs better here. It is a silly but sweet, good message movie.
The acting was very good by "all cast members".
I particularly liked the comedy of an unknown actress and felt she held her own in every scene she was in...Stephanie Kurtzuba. She nailed the comedy part, better than Cameron, and I do love Cameron! I honestly could have sworn I was watching the actress Jenna Hoffman! but it is not, but they could be sisters!

It was not as funny as the movie trailer lead me to believe but Ms. Kurtzuba added that aspect.
Also I am not a big musical fan, but the updated songs I liked better.
7 people found this helpful

Darling NikkiReviewed in the United States on June 14, 2021
4.0 out of 5 stars
Almost as good as the original
Verified purchase
I am a huge fan of the original and I even played Annie in my school play so I was determined to hate this reboot. Much to my surprise, I loved it. It's a modern take on the story, but it still has the same heart. It includes all of my favorite songs like "Tomorrow", "Hard Knock Life", and "Easy Street". But it also has some nice original songs.

I even enjoyed most of the changes. Instead of a mansion, there's a Jetsons type smart penthouse. Instead of an orphanage, Annie lives in an overcrowded apartment with several foster kids. Annie still has a sunny attitude, but she actually shows how kids are affected by neglect and poverty. Daddy Warbucks is now Will Stacks and a politician, because of course he is. Annie has a lot more agency in this movie. She's very resourceful and actually tries to find her parents rather than just wanting on them to show up.

My biggest complaint is the lack of the character Rooster, Miss Hanagin's brother. To be fair, I think that almost everything needs more Tim Curry, but it was a bummer that they gave the plot twist to someone connected to Will rather than Miss Hanagain. I also appreciate that she actually has a bit of a redemption compared to the original where she vaguely states that maybe outright murder is crossing a line.

Amy GreenReviewed in the United States on November 14, 2016
4.0 out of 5 stars
GREAT updated version of a wonderful classic story. My daughter's favorite!
Verified purchase
This is my 8yo daughter's favorite version of Annie, after having seen all three. And I do definitely think it is as good as the others. My personal favorite is Disney's 2000 version because it most closely matches the Broadway musical, but I'd definitely recommend this one to modern kids. I grew up with the 80s version and of course no one will ever top Carol Burnett's portrayal of Hannigan, but other than that I think it's inferior to this one and to Disney's.

The first time I saw this I thought it was "OK," but I watched it with her again recently and was getting goosebumps all the way through. It does have a few scenes which I think could have been left on the cutting room floor (like "Moonquake..." weird), but the key scenes are done REALLY well. It captures the heart of the original story and brings it into modern times, more accessible to today's kids. I really liked the switch to black co-stars, and my white daughter expressed how she loves Annie's hair (which, impressively, was kept natural all the way through)--I love that this is one more way for her to internally normalize diversity, as we live in a 95% white state.

The music is FANTASTIC. If you have doubts about watching this or scoff at what some consider an unnecessary remake, listening to samples from the soundtrack might change your mind. I LOVE all of the new versions of the songs! (And of course so does my daughter.) And there are some great new songs, particularly "The City's Yours" and "Who Am I?" (goosebumps all the way through that one!) The soundtrack is a solid 5 stars.
6 people found this helpful

R. Baxter ShipmanReviewed in the United States on July 6, 2019
5.0 out of 5 stars
The sun didn't come out "Tomorrow," but right away for this remake.
Verified purchase
While some movies are better off not being remade, this modernized update of Annie didn't disappoint at all. The music, choreography and story were all very good. Cameron Diaz was a nut playing the infamous Miss. Hannigan. Jamie Foxx did a great job but Quvenzhané Wallis really stood out as the titular character. Despite the mixed reviews, I enjoyed this musical comedy a lot.
2 people found this helpful

Daniel G KeohaneReviewed in the United States on March 5, 2019
5.0 out of 5 stars
The Perfect modernization of a classic
Verified purchase
Annie is a timeless tale, and this modern version brings everything up to date while keeping the core music and storline in tact. It improves it in many ways, especially from the original film 80's version, of which I was not as much of a fan. I did love the '99 Bates/Garber edition, and this new version was just as good. Great for the family.
2 people found this helpful
See all reviews
Back to top
Get to Know Us
Make Money with Us
Amazon Payment Products
Let Us Help You
EnglishChoose a language for shopping. United StatesChoose a country/region for shopping.
© 1996-2021, Amazon.com, Inc. or its affiliates