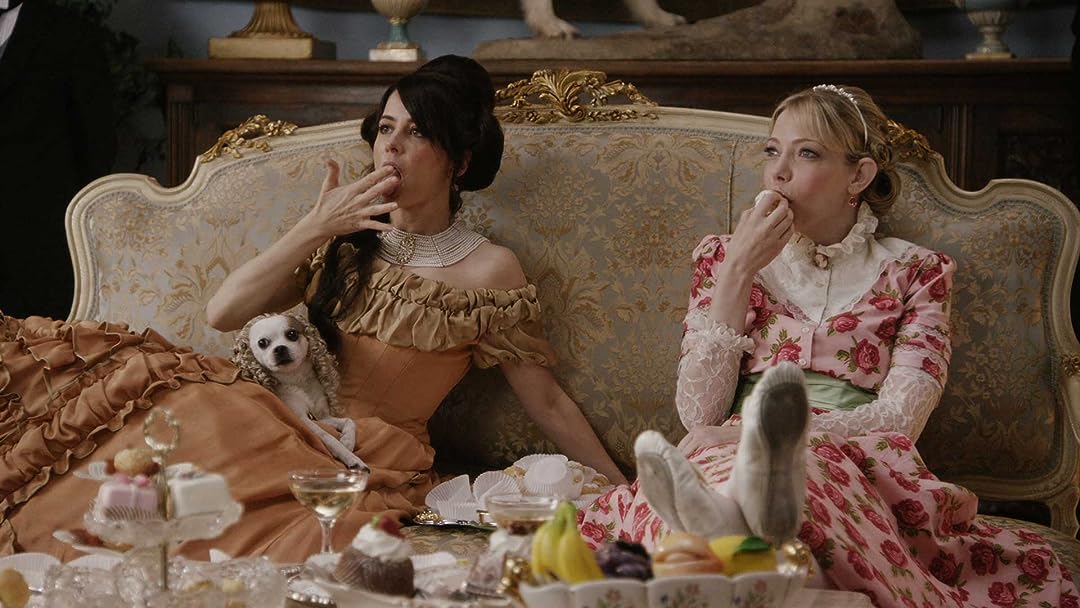 (228)
7.32015TV-14
Before Kim broke the internet and Paris flashed her family jewels, the Bellacourt sisters showed the upper crust how to be extra crusty. So ring the servants and bring on the chloroform sex, the original ballers have a new series that's totally loaded.

EJReviewed in the United States on June 27, 2016
4.0 out of 5 stars
Upper-class Twits of the Year.
Verified purchase
Hilarious little oddball. It's often described as a Downton Abbey parody, but the humor is a lot darker, more violent and surreal than you might expect from that description - at it's best there's a Monty Pythonesque quality to it. While most characters in Downton are generally good-hearted and the servants are usually treated kindly, here the upper classes are useless buffoons who treat the servants like garbage, and in return the servants generally give back fawning, undying loyalty, up to and including committing murder on the family's behalf.

A whole parade of historical figures blunder into the Bellacourts' orbit, including Helen Keller, Mark Twain, Sigmund Freud, and Charles Ponzi. So help me God I thought I was going to bust a gut when Leon Trotsky and Mahatma Gandhi get into an an argument and Gandhi bellows "Sounds like you're a member of the BITCH CASTE!" It's stuffed with little throwaway jokes, like how one of Lillian (Natasha Leggero)'s middle names is "Hitler" (yes, it's stupid, but I laugh every time they say it) or when one of the servants, who is trying to get out of servitude by landing a factory job, casually mentions that she has an interview with the Triangle Shirtwaist Company. And kudos to the writers for almost never explaining historical references and trusting the audience to get it.

G. ProutReviewed in the United States on August 7, 2019
4.0 out of 5 stars
Hilariously Irreverent, just the way I like it (SPOILERS)
Verified purchase
I love this show. It is horribly dark and lampoons some really sensitive subject matter, like Jeepers getting raped by a woman, or how all the women's suffragettes are hilariously unattractive. And my God is it funny! A show where virtually all the main characters are women and whom make most of their jokes about their own character flaws is a creative and awesome idea.

I wasn't expecting it to be as dark as It's Always Sunny but it is, and Thank God for that. Safe, normie 'humor' is painfully and uniformly not funny. See Amy Schumer or most mainstream sitcoms in 2019 for an example of what I mean. This show was amazing because it broke every rule that constricts modern comedy. We need a lot more of this kind of stuff in the future!

msReviewed in the United States on November 13, 2022
1.0 out of 5 stars
Yuck!
Verified purchase
Really bad. Not funny bad, just bad. Lazy writing, no real acting (more like a constant stream of yelled bad jokes), and limited production value. Reminds me of the worst of SNL (much of SNL is enjoyable, none of this is). Not just not subtle, but stupid. Bummed I purchased the entire first season based on reviews. I watched all of the pilot and a several minutes into the next episode (in case the pilot was the poor exception). Very sorry I can't return this -- watching the rest seems like a cringe-worthy waste of time. I guess I just wasted my money.

AussimargReviewed in the United States on July 30, 2016
1.0 out of 5 stars
Such a shame to waste talented actors
Verified purchase
It is a shame that there is nothing lower than one star. Perhaps Amazon should offer trailers of shows as they do of movies. One or two minutes of this was more than enough. I had hoped that the cast would mean that the show would be humorous, or, at the very least, entertaining in some way. However, that was not the case. The writers could be 3rd graders with a passing knowledge of history and a love of bathroom humor - although that may be giving them more credit than they deserve. The stereotypical characters have no substance, and the writers' efforts at getting the audience involved with a plot, characters, or even soliciting a laugh - all of which were basically is non-existent - falls as flat a punctured balloon. How anyone can compare this to Downton Abbey is beyond me unless all the focus is supposed to be on the costumes and the exterior of the building. It fails to show either a cynical, tongue-in-cheek, or realistic view of either class, although there are certainly things that could be taken from that era and dealt with humorously.
5 people found this helpful

Joe R.Reviewed in the United States on November 6, 2015
4.0 out of 5 stars
Very funny once you get into it
Verified purchase
I have to admit it took a couple of episodes to really click for me, but I ended up loving Another Period. It is a very unique satire/parody of current issues couched in a reality-show-style "newspaper series." Once you get into the central conceit of the show it really blossoms. The characters are quite unrelatable for aren't meant to be someone you'd identify with. The extremes the "riches" go to to enjoy their wealth are truly over-the-top absurdities, and the collection of talent in front of the camera is staggering.

This won't be a series everyone will enjoy and that's fine. As someone who loved Arrested Development, I found this show to be very, very funny with some really biting commentary on social norms and current issues in our society.
4 people found this helpful