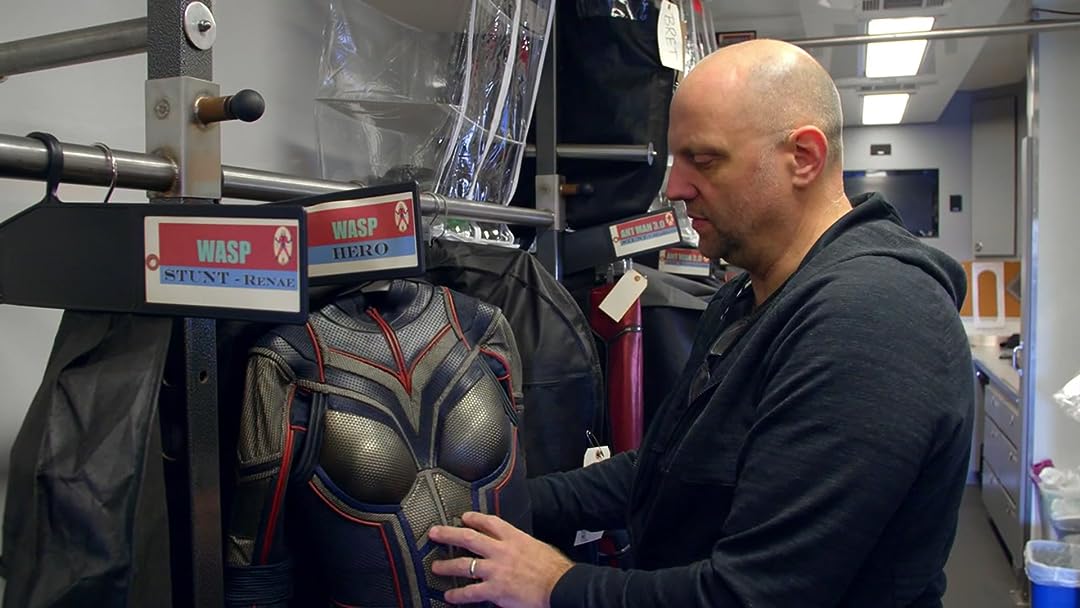 (24,318)7.02 h 36 min2018X-RayPG-13
As he struggles to balance his home life and Super Hero duties, Scott Lang finds he must suit up as Ant-Man again, joining the Wasp on an urgent mission to uncover secrets from the past.

Eric WarrenReviewed in the United States on October 7, 2018
4.0 out of 5 stars
A welcome break from the emotional bog left us by "Infinity War"
Verified purchase
My headline is not original, as many reviewers have noted that this next MCU entry is a nice repose (riposa) from the heavy weight we all felt after the last Avengers movie. But, if it were just that, it would feel like a the cinematic equivalent of a pallete cleanser - that is, the in-between food that gets us ready for the next major course in the meal. Ant Man and the Wasp is anything but. Featuring an even more developed main character, ably played by Paul Rudd, and a typically great surrounding cast, this second Ant-Man feature develops its own Mini-MCU by having the eponymous micro hero involved in a significant quest of his own, to save the life of his mentor's wife, and love-interest's Mother. No spoilers here, but getting to see the lovely Michelle Pfieffer in anything these days is a treat, in and of itself. As much as she and Michael Douglas have aged, the film places them in age-appropriate settings while not taking for granted their acting skills or considerable visual appeal. Great stuff, all around, highlighted by the inimitable Michael Pena, who I just love. Even after the disastrous, "CHIPs". And that is saying something.
61 people found this helpful

Customer Since 1998Reviewed in the United States on October 4, 2018
1.0 out of 5 stars
Great Movie, but we can't get it on 3D!
Marvel/Disney has been stingy with the 3D movies in the past couple of years. I've had to go to the UK to get Region Free 3D versions of my favorite Marvel/Disney movies. I wanted to get Antman & the Wasp in 3D through UK when I found it was only available in "Region 2" format. It's like they are *forcing* the market to move away from 3D. Not cool!
75 people found this helpful

Dadimus MaxReviewed in the United States on October 29, 2018
3.0 out of 5 stars
A solid & funny addition to the Marvel flicks
Verified purchase
Like: The family and I were laughing out loud at several parts. It's very tongue in cheek and doesn't take itself too seriously. Like how they tied what's going on in this movie with what's going on in the rest of the Marvel extended universe. And then you've got Michael Douglas and Michelle Pfiefer . . . two awesome actors doing what they do. I also really liked the Ghost character. I enjoyed that she was a deep and interesting character.

Dislike: OK, I got it that the ants are a big part of the movie . . . but really, do we have to have the ant playing the drum set, and sitting on the couch watching TV? And you mean to tell me that the ants are smart enough to build the quantum realm tunnel reactor thingy ?!? No fingers / thumbs, etc. and they're screwing in parts and such. I can sort of suspend my disbelief for a bit with the whole shrinking and enlarging thing . . . but the ants were just too much.

And why does the lead FBI character have to be such an ignorant baffoon? Again, just silly and pointless.

Mom of threeReviewed in the United States on November 10, 2018
4.0 out of 5 stars
Pleasantly surprised!! Entertaining!!
Verified purchase
I saw this in the movies with my 19 year old daughter who has seen the first Ant Man movie and also watched the Captain America movies and Infinity Wars. My 10 year old daughter, my mom and myself also saw the movie but none of us had seen the first Ant Man. To tell you the truth I wasn't expecting much, I really didn't know anything about Ant Man and just thought it wouldn't be good. I really liked Spider Man the Homecoming and have seen previous Batman movies and some of the Captain America movies but just didn't think Ant Man would be good. I have to say I was pleasantly surprised, I really liked the movie and it kept my 10 year old daughter's attention throughout the entire movie and my mom even thought it was a really good movie and she isn't really into the super hero movies. I didn't feel lost watching it, even though I didn't see the first Ant Man and it actually made me want to see the first one, which I still haven't yet but I do intend to. It was really a good show and I am glad we saw it in the movies.
12 people found this helpful

Colonel DReviewed in the United States on November 17, 2018
4.0 out of 5 stars
Ant Man and The Wasp is a good-time popcorn movie, 4.5 Stars
Verified purchase
You can sum up this recent addition to the Marvel Cinematic Universe with just one word: “fun”. “Ant Man and The Wasp” is a fast paced superhero flick that never takes itself too seriously. We find Scott Lang the former petty thief who previously stole Dr. Hank Pym’s hi-tech suit which allows the wearer to shrink or enlarge in size now under house arrest after his misadventures two years prior with the Avengers. Scott is working hard to be a great stay at home dad to his precocious young daughter. Soon enough he is drawn back into heroics by Pym and his daughter Hope Van Dyne in an effort to rescue Hank’s wife from the quantum zone where she’s been trapped since 1987. Naturally things get very complicated very quickly and viewers are treated to a non-stop action packed ride with plenty of laughs thrown in.

For those who want to dismiss Marvel productions as mindless comic book movies I say ask yourselves why they attract the talent that they do (besides the money)? Look at the cast assembled here; Michael Douglas, Michelle Pfeiffer, Paul Rudd, Evangeline Lilly, Walton Goggins, Michael Pena, and Laurence Fishburne- not what you’d expect for a silly superhero movie. Goggins is always terrific (he’s been impressive since “The Shield” and “Justified”) and Pena steals about every scene he’s in and is hilarious. Also noteworthy in small roles are Tip “T.I.” Harris and David Dastmalchian as Dave and Curt, two nitwits on Lang’s X-Con Security Company crew. They don’t log much camera time but make the most of every minute of what they do get and are extremely funny.

“Ant Man and The Wasp” is a highly entertaining movie that you’ll want to watch again just to catch all the jokes and enjoy the great performances from the cast. It’s not going to change your life and it lacks the gravitas of “The Avengers: Infinity War” but that doesn’t mean it isn’t a worthy addition to your Marvel DVD collection at home. Watch until the very end of the credits for a significant Infinity War tie-in. I’m looking forward to seeing Ant Man and The Wasp a new adventure soon. My only gripe is like many other releases these days is that the DVD comes with absolutely no special features and you are forced to purchase the Blu-ray or 4K version to get them. Ignore the haters and their largely incoherent 2-star reviews.
12 people found this helpful

J. GriffithsReviewed in the United States on October 17, 2018
3.0 out of 5 stars
MORE OF THE SAME + EVEN MORE OF THE SAME
Verified purchase
This movie is a perfect example of how Hollywood makes sequels. The slogan seems to be "If they liked one hour of non stop chase and shooting action they'll love 2 hours of it in the sequel" I was getting an itchy FF finger through a lot of this movie. I watched the first Ant Man movie a few days before this one and I thought the first one was a lot better. There's a few laughs in Ant Man 2 but the humer to me seemed more like the three stooges type without the face slapping. I'd like to know how they made Michael Douglas look, sound, and act like he did when he was decades younger.
29 people found this helpful

albionphotoReviewed in the United States on December 24, 2018
2.0 out of 5 stars
Mrs. Doubtfire with halloween costumes
Verified purchase
The first Ant Man film was okay. Not the best Marvel film but enjoyable. Given the hype that any Marvel films have I was a bit cautious about this one but when it came onto Amazon Prime I decided to give it a try. Oh deary, deary me.
I have certain expectations for Superhero movies, a plot, some excitement, special effects, nothing outrageous really.
This is at best a very poor domestic comedy. It's not very funny and mostly relies on the sort of visual gags rejected by "Home Alone". The dialogue for the movie makes Harriet the Spy or Spy Kids look sophisticated. The action sequences, when they arrive are mundane and don't really break any new ground. There is the obligatory appearance from Stan Lee (RIP).
One more thing that particularly irritated me was the tendency for Ant Man to get larger rather than smaller. Really, the whole point of Ant Man is that he gets smaller. Ant man getting smaller, how novel. Shame it didn't happen much!
The villain "Ghost" is one of the better villains in the MCU but you can tell this is a Disney movie when she has a happy ending.
It's a real bad movie when the presence of Walter Goggins and even Michelle Pfeiffer can't rescue it. Give this dud a miss.
4 people found this helpful

Aviator MarioReviewed in the United States on October 22, 2018
4.0 out of 5 stars
Fun superhero film. Not an epic, more like the one-and-done Marvel issues I loved in the 80s
Verified purchase
This film reminded me a lot of the first time I came across Scott Lang in Iron Man #151. In the books, he was always a funny but dynamic hero, who stepped into his suit with an enjoyable mix of guts, luck and skill. What I appreciated about this movie is that it didn't pretend to be an epic like Ragnarok or Infinity War. It has all the charm of the one-issue Marvel books I was raised on. It tells a complete story, and you get the entertainment you paid for, without the emotional or narrative hangover of the "big" Marvel films. Paul Rudd nails the character as always, without overplaying either the comedy or complications of Lang's situation. Michael Douglas turns in his usual note-perfect performance. Evangeline Lilly makes the most of her expanded role, and shines much more than in the first film. Michael Peña remains the hardest working man in movies today, and steals every scene he's given.
6 people found this helpful
See all reviews
Back to top
Get to Know Us
Make Money with Us
Amazon Payment Products
Let Us Help You
EnglishChoose a language for shopping. United StatesChoose a country/region for shopping.
© 1996-2021, Amazon.com, Inc. or its affiliates