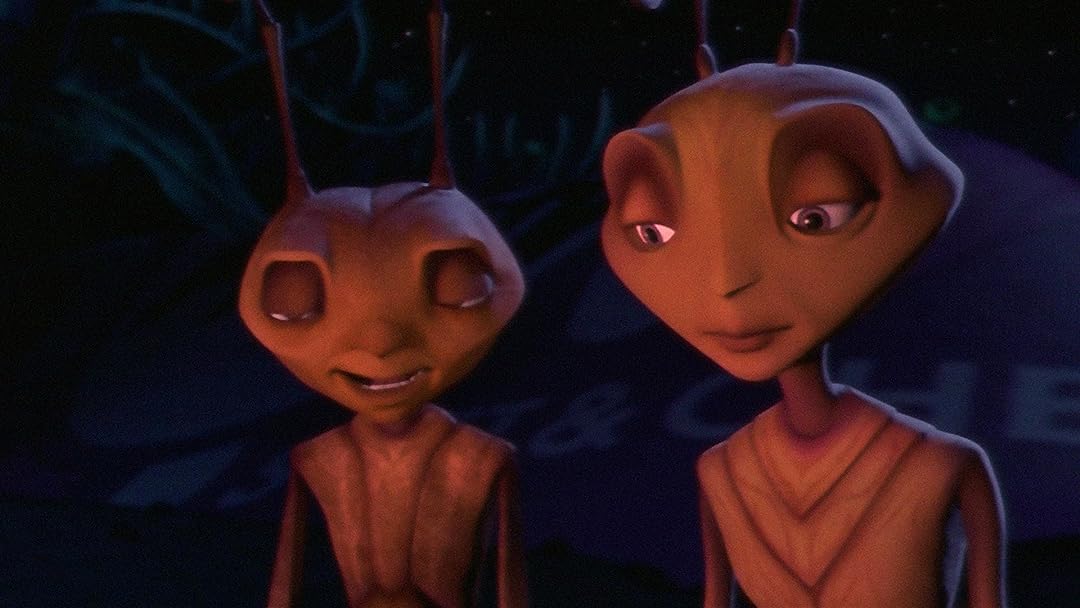 (2,191)
6.61 h 22 min1998X-RayPG
No picnic will ever be the same when DreamWorks Animation presents the romantic comedy adventure, Antz. Z is just a worker ant - one in a billion and his odds of landing the beautiful Princess Bala are about the same. When a remarkable twist of fate turns Z from a common drone into an unlikely hero, he soon finds himself leading a revolution that becomes a celebration of individuality.

KatReviewed in the United States on May 9, 2021
4.0 out of 5 stars
Z is the best!
Verified purchase
Great animation movie! Z learns that no matter your station in life, you can reach to achieve more. Great story, excellent characters... a must see for kids and adults alike.
2 people found this helpful

Betty L. WilkinsReviewed in the United States on May 4, 2013
5.0 out of 5 stars
The Ants are marching......
Verified purchase
Z is an ant in a colony of millions who is unhappy with his existence. While he doesn't mind being an ant, he does mind the humdrum life he has been handed. A chance meeting in a bar however, changes his life and he changes his fate when he trades places with a soldier friend in order to see his dream girl. Things get out of hand when he finds himself headed to a Termite War, and succeeds in becoming a hero overnight when he returns as the only survivor. He is accused of subversion,but escapes with Princess Bala in tow and looks for a mythical place called Insectopia. He also finds himself embroiled in a sinister plot by the General of the Ant Army to destroy the ant colony in order to build a colony to his own liking and must find a way to save them and the princess he has come to love.
4 people found this helpful

aleinnReviewed in the United States on May 20, 2021
3.0 out of 5 stars
Not for children
Verified purchase
Warning what was acceptable for kids in 1998 is very questionable in 2021. What where our parents thinking ???
One person found this helpful

M. LyonReviewed in the United States on September 26, 2018
3.0 out of 5 stars
More for adults than for kids
Verified purchase
This storyline is mostly about social politics, and it went over the kindergardener's head and she got bored and didn't finish the movie. It's more for older kids/tweens and up. I enjoyed the movie myself later on, but the purpose was to entertain my young visitor, so when the rental ran out, I didn't buy the movie. She enjoyed A Bug's Live much more.
2 people found this helpful

AReviewed in the United States on December 2, 2019
5.0 out of 5 stars
Family Friendly
Verified purchase
I missed having this on VHS. Being digital it’s easy to watch anywhere. Super fun with funny and intense parts throughout. Great for families, kids or adults.
3 people found this helpful

Myung Sunn RyuReviewed in the United States on December 20, 2001
4.0 out of 5 stars
Woody Allen movie
Verified purchase
This movie is to "Bugs' life" what "Small Soldier" is to "Toy Story". Woody-istic sarcasm runs through. He(as ant Z) fights against "007-Moonraker" style bad guy in a way he did not planned or intended. But his deep discontent about the social structure that disregards individuallity is the driving force of his adventure. Sorry for Bugs Life fans but while I enjoyed BL and applauded, that was it. I returned the DVD to the rent shop and forgot it. But AntZ I saw the movie and I wanted to keep it.
A goofs is there in the magnifying glass scene. It does not show you a correct optics. Play with a magnifying glass and compare with the scene in AntZ, and you will see it.
One person found this helpful

Lori EconomouReviewed in the United States on May 26, 2021
5.0 out of 5 stars
When Hulu or Netflix remove a favorite movie...
Verified purchase
My daughter absolutely LOVES this movie and the day Hulu took it off its rotation, I thought it was going to be World War 3 up in my house. Being non verbal autistic, my daughter didn't understand why she could watch it like before. So I went and ahead and bought the digital copy so.she can watch it anytime she wants.

RandyReviewed in the United States on October 1, 2015
4.0 out of 5 stars
My mother's sister is my Antz?
Verified purchase
Movie is a classic. Period. But for reasons unknown to me the (original?) quality of the DVD is not all that good. It's like the master wasn't up to par. If you are looking for a DVD quality print of this movie.. be prepared to accept something between a VHS and a DVD IMHO. The graphics are also retro - well it's as old as the hills and twice as dusty. Happy with purchase however.
5 people found this helpful
See all reviews
Back to top
Get to Know Us
Make Money with Us
Amazon Payment Products
Let Us Help You
EnglishChoose a language for shopping. United StatesChoose a country/region for shopping.
© 1996-2022, Amazon.com, Inc. or its affiliates