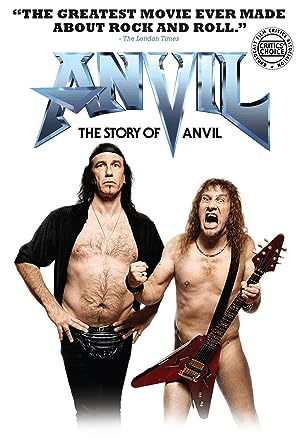 Anvil! The Story of Anvil

(367)
7.91 h 21 min200818+
At 14, two Toronto schoolmates - Steve 'Lips' Kudlow and Robb Reiner - made a pact to rock together forever. They meant it. Forming the band Anvil in 1982, the duo released one of the heaviest albums of all time - Metal on Metal - influncing some of the biggest names in rock including Metallica, Slayer and Anthrax.

Son of Flintstone MunchausenReviewed in the United States on November 26, 2017
5.0 out of 5 stars
Well, Hell's Bells, it's the Decline of Western Civilization The Metal Years from Toronto
Verified purchase
THE STORY OF ANVIL (film).

The guys are likeable, the story too often familiar. You root for the underdog, and these guys got the faces of underdogs. One of my ongoing fascinations spinoffs from addictive record collecting (thank the Almighty for thrift shops!) is researching the fringe carnival barker 4th tier show business characters ("ex-rockers") who grind out a living raging against evil rock music in small churches, with slide shows, laying out folding tables full of fringe fundie Christian DVDs (er, VHS) eyeball punishing documentaries, and lots and lots of things that look like books, calling upon teenagers and their panicking parents to renounce the "rock lifestyle." Frankly, THE STORY OF ANVIL here and a 1987 film about Los Angeles 3rd-rate "hair bands," THE DECLINE OF WESTERN CIVILIZATION, THE METAL YEARS, would be far, far more effective discouraging guitar slinger get rich wannabees than HELLS BELLS. Taking a close look at ...ANVIL, the Toronto band's 1982-84 experience seems very much like a Los Angeles heavy metal defunct band, Odin, featured in THE DECLINE OF WESTERN CIVILIZATION, THE METAL YEARS.

Most eye-opening moments in THE STORY OF ANVIL center around the minivan trunk marketing shots of Lips loading up boxes of vanity private press THIS IS THIRTEEN albums (cardboard crates of maybe 1000-1500 CDs?), attempting to get the last ditch record deal locally at EMI, and the end credits' followup stating that Anvil got paid off by the Czech bar owner for 100 Euros (about $130 bucks?) after the gig and yelling match being paid in noodles.

Oliverio CasasReviewed in the United States on April 6, 2013
5.0 out of 5 stars
Unsurprisingly, this is, and will always be, Anvil's greatest release
Verified purchase
Back when I was a kid and Anvil was supposedly relevant, in the early to mid 80s, this band was the textbook definition of third (or even fourth) tier metal act.
Not that I remember them that much... I can recall somebody taping me some songs from Metal on Metal (their supposed masterpiece) around 1985 and always fast forwarding the cassette when they came up. They weren't really that bad, they just sounded lame, like some lesser talented Manowar with boring songs and no charisma. My best guess is that back in the day, some people outside Canada listened to them simply because they weren't that many bands to choose from, and that their rapid slide into irrelevance was more a consequence of their lack of talent rather than management and record label woes.
The movie makes a big deal about how important they were in shaping the early sound of thrash metal, but really, I don't see how this band could've influenced Metallica, Anthrax or anyone for that matter. While Venom, Diamond Head, Motörhead, Raven and Exciter had a seminal role bridging the NWOBHM with early thrash, Anvil was just a standard radio metal band that couldn't write good singles.
Now, don't get me wrong. I do admire these guys, but not because of their musical legacy, and being a guy who quit his own band at 26 and music altogether at 30 because juggling between two careers was too hard, I can't feel nothing but respect for this duo.
The Story of Anvil struck a chord on a lot of people because it's not really about an unsuccessful, over the hill heavy metal band: it's a testimony to friendship, never giving up on your dreams and the power music has on people.
Back when I saw this movie in 2010, I was so moved by it that I bought Metal on Metal and Forged in Fire. Sadly, both albums confirmed me, at 38, what I already knew at 12: this band's just not that good, or even mildly interesting.
That said, this documentary manages to be both a fun ride and an incredible study on human nature that any music lover will doubtlessly enjoy... and will be Anvil's ultimate legacy.

Notable DVD Extras:
Aside from a rather uninteresting commentary track, there are three enlightening deleted scenes. The first one features extra footage of Lips working as a caterer, the second, the story of Lips' older brother's medical problems, and the third, short "where are they now" style interviews with two original members who left the band in 1989. It's quite easy to see why said scenes were left in the cutting room floor: had the first two been included, the film's tone would've turned up too depressing, and the third one, while informative, would've hindered the documentary's narrative pace.
5 people found this helpful

M. FrancisReviewed in the United States on November 8, 2009
5.0 out of 5 stars
Anvil strikes a funny and emotional tone
Verified purchase
Anvil: The Story of Anvil is certainly a must see for anyone who likes true life stories of hardship, disappointment, dreams and success. Plus some great music. Most documentaries tell a bunch of facts, and if you like the subject and they're okay to watch. But this movie tells a story, with a beginning, middle and end. It touches all the emotions and just when you thought things couldn't get worse for the group Anvil, Sascha, the director, figures out a way to make you feel their pain, and then gives you the perfect ending. This is not a standard documentary, this is a movie, and a very good one. And one that actually accomplished something. Since the movie was released, Anvil has finally seen their dreams come true. Because of the story, and the response to the movie, the group has gotten a record deal, and a US Tour is coming up in 2010, and they recently opened at Giants Stadium in NYC for AC/DC.

John CassettaReviewed in the United States on February 10, 2010
5.0 out of 5 stars
Find Inspiration in the most unusual places
Verified purchase
It's not every day that you watch a movie about aging heavy metal musicians who never quite made it and find inspriration. Anvil: The Story of Anvil is one of those occasions, though.

As a middle-aged metalhead, I was already familiar with their music from the early 80s. Like the rest of the world, I was surprised to find that they never went away and were still recording albums, going on tours, with the dream that this would be the one that would hit the big time.

Watching Lips and Robb talk about their 30 years together and their dream of being rock stas was amazing. How two people can have such perpetual optimism and hope is baffling. To hear Lips say that everything went wrong on a tour, but at least there was a tour for them to go wrong on... now that's refreshing and inspirational. In a time when people focus on the negatives all too much, he found ways to focus on the positive. And against all odds, Anvil has finally made it.

You can't help but root for these guys when you're watching the movie. And if you really want to enhance the experience, read the book, too. You won't believe what these guys have been through over the years.

So the next time you think you've got it tough and can't keep going, think about Lips and Robb. They are two amazing guys.
2 people found this helpful

Amazon CustomerReviewed in the United States on September 25, 2016
5.0 out of 5 stars
Old Dudes that Didn't Stop Dreaming
Verified purchase
Come on, who has seen this and doesn't like it? It's not just a story about a pair of friends chasing the dream of rock n roll stardom, it's that story but with guys in their 50s whom never gave up on their dream. I really like seeing and hearing about stories like this that don't completely revolve around kids trying to make it in the music business - it's great to see older bands doing it too.
2 people found this helpful

D. Coleman; Managing PartnerReviewed in the United States on June 17, 2020
5.0 out of 5 stars
**A MJST WATCH FOR ALL METALHEADS** or anyone wanting to see the power of dedication and rocking!
Verified purchase
The most touching and inspiring story of determination and dedication by PIONEERS of metal. They inspired the likes of Metallica and your other favorites. It took this movie for them to FINALLY be recognized. You will rock, cry, believe, and see the value of friendship. And you WILL be a fan after watching this. I promise. Z
One person found this helpful

msmuglerReviewed in the United States on October 18, 2009
5.0 out of 5 stars
Sometimes the "Good Guys" Win (Even 20+ years later!)
Verified purchase
As a metal head and documentary fanatic, I was worried that this movie would never live up to the "hype". I stand corrected. I was a teenager in the 80's and hung with many of the metal bands of the day. I had the chance to see Anvil, and loved the music and the show they put on (which was later copied by many of their contemporaries). I didn't keep up with them over the years, but in all fairness they were hardly a household name.

Now for the movie review...The direction of the movie was superb. You get a real sense that the band members have a genuine love for both the music and each other, despite the odds of crappy management and languishing in virtual obscurity for over 20 years working against them. In Lips, I found myself amazed by his tenacity, cock-eyed optimism, and love for his music and friends. The scene between he and Robb where he says he could "jump off a bridge, but that would be the easy way out" and Robb's subsequent reply made me tear up.

The most pleasant suprise is that AC/DC, who were NOT in any of the promos for the movie (hint..hint..Slash & Lemmy)actually took Anvil out on tour with them this summer. Its one thing to say "what a great band, what ever happened to them?" and another to put your money where your mouth is and give them a gig!

Whether you're a metal fan or not, this is a great movie that just may renew some of your faith in the human race. I'd like Lips to know that I am trying to use a little of his optimism in my own life!!!

Great luck to you guys!!!
7 people found this helpful

T. RudolphReviewed in the United States on March 17, 2017
4.0 out of 5 stars
A feel good movie for everyone.
Verified purchase
One of my favorite documentaries of all time. It is well made, well paced, interesting with a feel good ending. I give this DVD to all my friends and acquaintances that turn 40 or 50 for inspirations. The characters are real. I just went to a concert in March 2017. They are genuine, fun, hard rock, heavy metal, odd, weird, old, and young at heart.
See all reviews
Back to top
Get to Know Us
Make Money with Us
Amazon Payment Products
Let Us Help You
EnglishChoose a language for shopping. United StatesChoose a country/region for shopping.
© 1996-2022, Amazon.com, Inc. or its affiliates