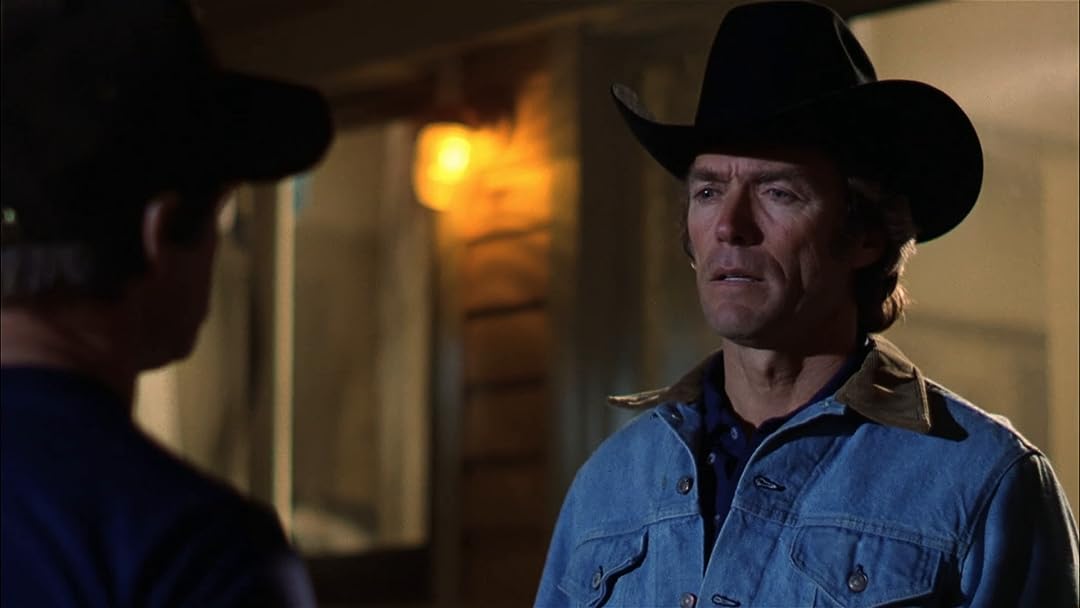 Any Which Way You Can

(3,262)
6.21 h 55 min1980PG
Philo Beddoe, an easygoing truck driver and brawler, and his 165-pound orangutan pal Clyde get into more mischief in this faster and funnier sequel to Every Which Way but Loose.

MeemeReviewed in the United States on March 22, 2021
1.0 out of 5 stars
Didn't Watch
Verified purchase
I know I shouldn't rate this movie if I haven't watched it, but after reading the reviews and after watching two PG rated films previously with Clint Eastwood, I'm throwing this movie away without watching it and giving it zero stars. He has no standards or sense of decency judging by the tow "warm-hearted, fun" movies that included pedophilia in one and a near rape in the other with loads of foul language in both. PG means suitable for kids. My grade-schoolers watch PG rated movies like Ice Age. This is WAY beyond that rating. I've seen R rated movies less offensive.

Naomi TilleyReviewed in the United States on May 27, 2003
5.0 out of 5 stars
Right turn, Clyde
Verified purchase
This is a great movie, even if it is a sequel, and even if it is a little bit on the thin and choppy side.
It opens in classic style, with Philo Beddoe (Eastwood) getting ready to take down another sucker at yet another fight, and just rolls along from there. The main gist of the movie that Beddoe is recruited for a major fight, against a man from the East who has a nasty reputation for crippling and killing his opponents.
At first Beddoe agrees to the match, but with the resurfacing of his relationship with old girlfriend Sondra Locke, he eventually decides the risks are too high. Desperate to stage the fight, and save their own rears, the two crooks running the show kidnap Philo's girl in an effort to force his hand.
The rest is somewhat predictable, but fun to watch regardless....
There are a few side stories on the go as well - particularly, Clyde's interest in the newest addition to the orangutan enclosure at the zoo, and Ma's wild ride in the pick-up truck with a car wreck hooked up to the back (at least, at the start of her trip).
Also, if nothing else, it's worth watching for the insane antics of the Black Widows bikers' gang. These scene stealers get plenty of air time, and are worth every minute of it - especially their hapless leader.
Scenes to watch for - the tar scene, and every time Clyde gets into a police car.
This is a movie to sit back and roar laughing at. Forget logic. Just enjoy yourself.

doctorspockReviewed in the United States on December 19, 2014
5.0 out of 5 stars
Any which You can
Verified purchase
Wiliam Smith was no joke too bad he look like he messed with drugs and messed up that wonderful scary body of his. I want his autograph anyway! i really remember him in the shot in the water with cathy lee crosby on hawaii Five O if I can get him to auto that i would really appreciate it. i will check him and se if he can freeze frame off his tv dvd and print it out! no one could compare to the two together and with Clint Eastwood they cut out good stuff that could have been in the fight. actualy was a touching movie! i as in ps 187 JHS and Friday night this came on , on channel 4 when Hollywood was still HollyWood

Carol @CRReviewed in the United States on June 29, 2021
5.0 out of 5 stars
Very Entertaining
Verified purchase
Clint Eastwood and the little old lady in the film were my very most favorite. They were hilarious. Although all the actors were great. Even the animal We have watched it numerous times and will definitely watch it again

Todd M PetersonReviewed in the United States on December 1, 2020
5.0 out of 5 stars
Funny
Verified purchase
Not the best Clint Eastwood movie. But, I was a teenager when I saw this movie in the theater and I loved it then and I still do. A fun comedy that doesn’t require much thought to follow or enjoy.

Tammy Hill-HendershotReviewed in the United States on May 3, 2020
3.0 out of 5 stars
Movie
Verified purchase
I love this movie. this is a classic and I'm so happy I have it to watch any time I want. One thing is I don't care for is that its chopped up like it's on a local channel. swearing is bleeped out. I'm not very happy about that!

TmcbroomReviewed in the United States on November 16, 2021
5.0 out of 5 stars
Purchase
Verified purchase
I love prime video , i buy all my movies.. and can down load them to watch any time, any where !!
No internet needed !!

PokeyReviewed in the United States on May 11, 2019
5.0 out of 5 stars
Right turn Clyde
Verified purchase
We really enjoyed this movie. Teaching the orangutan to punch out the window by saying "Right turn Clyde" always makes me laugh. Clint Eastwood has a wide range of movies that he can pull off. He is one of my favorite actors.
One person found this helpful
See all reviews
Back to top
Get to Know Us
Make Money with Us
Amazon Payment Products
Let Us Help You
EnglishChoose a language for shopping. United StatesChoose a country/region for shopping.
© 1996-2021, Amazon.com, Inc. or its affiliates