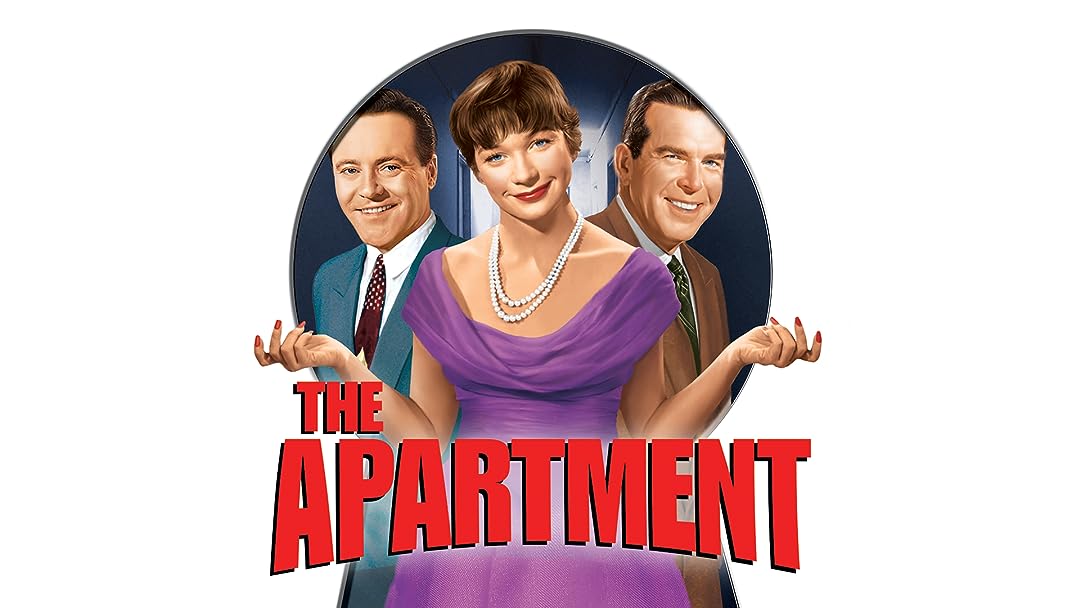 (2,353)
2 h 5 min1960X-Ray13+
Ambitious insurance clerk C.C. "Bud" Baxter (Jack Lemmon) attempts to climb the corporate ladder by "loaning" his apartment key to his superiors for their extramarital affairs, but the plan backfires when Bud unwittingly falls for the top executive's current girlfriend, Fran Kubelik, an elevator operator in the office building. Fred MacMurray co-stars in this Billy Wilder classic.

Stephan PetersReviewed in the United States on September 29, 2017
5.0 out of 5 stars
He's so noble that I can't help falling in love with him myself
Verified purchase
I rented this three days ago and watched it four times in the 48 hours I had available. Every single time, I appreciated the move more. I'm planning to rent it again tonight and watch it with my husband. I think this is one of the most poetic romantic comedies I've ever had the pleasure of experiencing. Billy Wilder's writing and direction are beyond words (at least my words). He has such attention to detail. (small spoiler alert - all through the film there are subtle previews for big plot points. One example is the fact that it is necessary to use matches to light the stove. We experience Mr. Baxter lighting the match for the stove several times before the scene with the gas smell, and so we've been primed to get the twist of plot when it happens. It's the same with the executive washroom key and several other things as well.) Jack Lemmon is stellar as C.C. Baxter. He's so noble that I can't help falling in love with him myself. Letting the people in the office and the apartment complex think bad things about him so they will think not-quite-so-bad things about her is just darling. Fred MacMurray, of course, nails his role. There's no surprise there. He can play anything from an insurance salesman killing someone on practically a whim to an absent minded professor, and he IS the nasty, jerk-wad, two-timing, philandering boss creapo to a T. Shirley MacLaine was beyond charming. All the side characters were played beautifully as well. My only regret is that I'm almost fifty years old and I didn't watch this film until this week.
34 people found this helpful

Piano PlayerReviewed in the United States on December 3, 2019
5.0 out of 5 stars
Superb Blu-ray edition
Verified purchase
The word "spiffy" must've been created to describe this Arrow Blu-ray edition of THE APARTMENT, because that's exactly what it is.

As a huge movie fan, I'm embarrassed that I'd only seen the film one time. Until yesterday, when I finally opened this package and watched it straight through.

The movie itself is stunning -- two hours that seems more like one. Poignant, funny, touching. And the Blu-ray is also stunning -- crisp black-and-white transfer, crystal clear sound. Lots of great bonus features on the disc.

What does it say when a movie from 1960 is the best movie I've seen this year, in 2019? (and I've seen many) THE APARTMENT is a movie that actually deserved to win the Best Picture Oscar.

JangleReviewed in the United States on December 23, 2019
5.0 out of 5 stars
Brief moments, little things
Verified purchase
The acting is great, including that of the supporting cast. Exaggerated at times, but after all, it’s satire. The witty screenplay by Billy Wilder and I. A. L. Diamond interweaves happiness, sadness, and the brief moments & little things that say a lot about our lives. For example, Miss Kubelik’s reference at a Chinese restaurant to “the same sauce, sweet and sour” is her way of commenting on the “sweet and sour” relationship she’s been in, and the broken mirror in her compact reflects how she feels. Recurring elements such as a record album by the piano player at the restaurant serve as signposts for viewers and links among the characters.

Some motifs occur many times, like the keys to the apartment and the executive washroom, which move among the employees of Consolidated Life. Others show up just twice, such as a tennis racket used as a spaghetti strainer, or the idea of sending someone a fruitcake every Christmas. Some references mark the times, such as TV ads for cigarettes, The Untouchables on Thursday evening, and the original Broadway production of The Music Man.

Wilder said this film was inspired by a scene in the English movie Brief Encounter (1946), in which a man takes the woman he’s seeing to the apartment of a friend. The friend returns early, and the woman goes out the back way. The return of the key in that film evolved into all the business about keys in The Apartment.
5 people found this helpful

TaraReviewed in the United States on September 18, 2021
3.0 out of 5 stars
A cautionary tale about the fallout of getting involved with a Classic Narcissist
Verified purchase
This was definitely a unique movie, but the plot is messed up. People are calling this guy "noble", but he's aiding in immorality and is a pushover whenever anyone mentions they *might* help his career. He's abusing the system and the people in power are abusing him. He'll do immoral things just to get to the top and I don't see that as heroic, unfortunately. His storyline is kind of a "how far would you go in order to get what you want". However, in the end, he finally takes a stand for himself and his principles.

The female lead is equally as culpable, equally as much of a pushover... which I suppose makes them a good match. She's caught in the web of Narcissistic gaslighting and abuse and can't seem to find the exit. Narcissists often have affairs while married, so it was interesting to see it from the perspective of "the other woman". She's got a good guy who likes her and treats her well, but (true to someone under Narcisstic influence) she throws away the advances of the "noble" character in favor of the manipulator. The movie doesn't really finish her storyline, but we're left to assume how things turn out.

All in all, it was interesting and unique. I probably would not watch it again because of the twisted morals of all involved.
2 people found this helpful

Robert SchafferReviewed in the United States on June 20, 2022
5.0 out of 5 stars
Looks excellent in 4K!
Verified purchase
Billy Wilder's best picture winning dramedy looks absolutely phenomenal in 4K!
I was honestly worried when I found out it is not in HDR, but my worries evaporated when I saw the incredible way the movie looks in 4K. This is one great looking disc!
The Apartment is one of Jack Lemon's best and Shirley McLane also hands in a perfect performance as the movie's costar. Fred McMurray hands in one of his most unusual performances as the slimy boss who guiltlessly uses his female employees to cheat on his wife with. Before seeing this film I never imagined he could play such a slime bucket so incredibly convincingly. Boy, did I hate his character by the movie's end (which is a credit to how believable his performance was).
If you are worried whether it is worth investing in the 4K Blu-ray, let me assure you that it is worth every penny. This disc is a BIG improvement over the regular Blu-ray.
This is a great looking version of a great movie.
It comes very highly recommended!
One person found this helpful

Cricket218Reviewed in the United States on July 6, 2021
5.0 out of 5 stars
One of my all-time favorites - it all started with an apartment
Verified purchase
I don't have much to add that others haven't said, but I had to throw in my two cents for one of my favorite classics. It first caught my eye at the library when I was a grad student living in my first apartment - get it? - and I was utterly taken with the whole thing: the story, the dialogue, New York on cold, windy November evenings - and of course, Mr. Baxter's apartment. Every detail intrigues me as he walks around cleaning up after people, trying to enjoy a TV dinner alone, and finally singing over spaghetti ("wait till you see me serve the meatballs!" - whoosh goes the tennis racket). Fifteen years later I'm still as smitten as Miss Kubelik... must have watched this movie over 200 times. Jack and Shirley never grow old. Ah well. Of course they were much younger then.
2 people found this helpful

A. Film LoverReviewed in the United States on December 31, 2017
5.0 out of 5 stars
The Apartment in a new and gorgeous transfer = Happy, Camper-wise
Verified purchase
A great new transfer of a great old film. This is classic Wilder/Diamond - beautifully and simply directed by Wilder, and acted brilliantly by Jack Lemmon, Shirley MacLaine, and Fred MacMurray and the supporting players, gorgeously shot by Joseph LaShelle, with great sets and costumes and a fine score by Adolph Deutsch. As unique and fresh today as it was the day it came out in terms of its tightrope act balancing drama and comedy, they simply do not know how to write films like this anymore. The dialogue puts any modern original film to shame, and so do the actors put to shame all of today's mumbling idiots - it's so nice to hear people speaking up and so you can actually understand them - 90% of what I see today I can't understand a word of. Dear today's actors: Watch Mr. Lemmon and Ms. MacLaine and learn. This new transfer is miles better than the previous Blu-ray, which I was not all that fond of. Too bad there seems to have been a screw-up somewhere with the Amazon copies - thankfully I got mine. But just a note to the two creeps trying to gouge this title here: You are disgusting. I recommend everyone writing those two dealers a note and letting them know what you think of them - I know I did.
24 people found this helpful

SnapeReviewed in the United States on May 24, 2022
5.0 out of 5 stars
Must buy 4k master of a classic!
Verified purchase
A Billy WIlder, Jack Lemmon & Shirley McClaine classic. I never get tired of watching this movie! This new 4k version is an improvement on the Arrow limited edition blu-ray (which is a great looking disc as well). I was hesitant to double dip, but now that I seen it, I have NO regrets!
2 people found this helpful
See all reviews
Back to top
Get to Know Us
Make Money with Us
Amazon Payment Products
Let Us Help You
EnglishChoose a language for shopping. United StatesChoose a country/region for shopping.
© 1996-2022, Amazon.com, Inc. or its affiliates