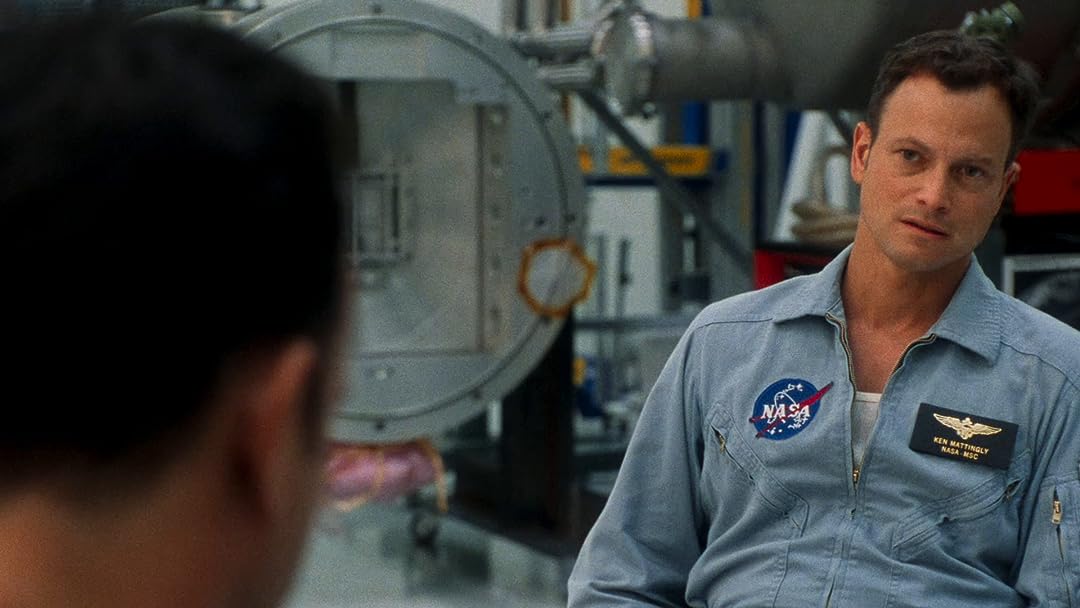 EowynReviewed in the United States on September 4, 2016
5.0 out of 5 stars
Never pales. Always thrills. Hanks got his wish to be an astronaut (finally) and we are glad of it!
Verified purchase
This movie is my favorite movie. It puts a lump in my throat every time I watch it. And I have watched it a lot. What I love about it, is the hero's have slide rules and short sleeve shirts and glasses. No car chases. No gun fights. Just guts and the spirit to keep trying in the face of what seems hopeless situations. Probably my favorite movie by Hanks and Howard. And it makes me smile to hear NASA loved it so much, they wanted to use frames of the lift off. Way cool.
57 people found this helpful

Amazon CustomerReviewed in the United States on October 21, 2018
5.0 out of 5 stars
An Incredible and TRUE story of overcoming adversity
Verified purchase
Whatever you have heard about "fake news" has NOTHING to do with this dramatic and true event. Both the US and the former Soviet Union have had near disasters in space. This movie very clearly and accurately chronicles the events of what was meant to be a "typical" flight to the moon in April of 1970, less ten months after Neil Armstrong and Buzz Aldrin's historic moon landing (and, also the unsung here of that trip, Michael Collins, who orbited the moon as the others went on their historic trip on the Eagle to the lunar surface).

If you want to see NASA during her "finest hour" then you will certainly not want to miss this epic video.

saxmanReviewed in the United States on February 22, 2017
5.0 out of 5 stars
Apollo 13 The Best
Verified purchase
What a great movie. Ron Howard said this was his favorite movie that he directed. I remember as a kid watching this whole thing unfold. We would watch tv not for the shows, but we'd just be waiting for Apollo 13 updates. After watching this movie a couple times I looked up the astronauts to see if they were still around and how old they are. Lovell is 88 now. We still haven't gone back to the moon. I would suggest that young people familiarize themselves with this movie, because it's a true story. These guys were lucky that they were able to get back to a Earth- of course they had some of the smartest people in the USA working to get them home. Great American movie and story.
34 people found this helpful

Robert Andrew CurryReviewed in the United States on June 26, 2018
5.0 out of 5 stars
10 out of 10 for this movie.
Verified purchase
This two disc 4K Ultra HD/HDR/Blu-Ray, arrived on time and undamaged. Picture, sound and features playback is superb, especially now that this Ron Howard movie has been given a glorious makeover in 4K UltraHD/HDR and its soundtrack is now available in stunning Dolby Atmos X, which brings the movie alive gives me the viewer the ultimate in viewing pleasure and the ultimate in movie watching experience. I am so pleased that I made the move over to 4K UltraHD/HDR, with Dolby Atmos X for sound and vision. 10 out of 10.
24 people found this helpful

BixReviewed in the United States on September 28, 2021
5.0 out of 5 stars
America's Finest
Verified purchase
This ciné movie is inspiring beyond any review. Ron Howard has become a permanent 'Citizen Kane' director, writer, and producer.

I am old. I grew up as a true space cadet in the 1960s. John Glenn was a first hero. I followed every mission. from Freedom 7 to the Shuttles. —and I had no T.V.
Of course, I bought and read (many times) Capt. Lovell's book, "Lost Moon". If you want a better feel for what those 7 days were like in the sky and on the ground, read his book.
Capt. Lovell, YOU LOST NO MOON. You FOUND the Earth.

Don't believe in miracles? Study some of the basic science and look at Apollo 13's final trajectory burn and reentry adjustment. Both done WITHOUT the computer. A 2.5 degree tangent corridor. 3/4th of a degree over and you skip out into space at many times the 24,000 mph you began your re-entry. At a half degree under? You burn up. You're dead.
Miracles are not parlour tricks and they happen. All you need for that Faith is to understand the basic math behind Apollo 13's re-entry. It was impossible. I new it was impossible in 1970, at 12 years old.
But they did the impossible. That's a bonafide, Biblical miracle.

Maybe we need to again begin serious exploration of space. The space programme did NOT cost America a single cent. America is still reaping the rewards of The Space Programme. And I am not just talking about Tang orange drink. Without the 1960s space programme, the computer revolution would have been at least another 20 years to get to this point. The development of a useful microchip alone has paid all the bills and more of Apollo. From Mercury to The Shuttles. We are still benefiting from the inventions and discoveries that NASA has brought to the world. It did not cost, it PAID. Perhaps, The Space Programme SAVED America? It surely made us better people.
Remember what was going on in 1970. That was around the first time I was tear gassed at a civil rights march. Kent State. Vietnam. Obstruction of justice. The Attorney General, —the highest legal office in the land, —he went to PRISON.
—Seems like nothing compared to today.

YES. I am willing to pay MORE taxes for a proper SPACE PROGRAM. Maybe people will find that greatness remains within us. We just have to dig a little deeper.

How about putting a human on the Ganymede Moon by 2032? Why not? We could do this. It's there and we SHOULD do this. We'll learn a lot, and invent a lot. How can we lose?

R.A. MathisReviewed in the United States on July 24, 2017
5.0 out of 5 stars
An Overlooked Classic
Verified purchase
Hadn't seen this movie since it was in theaters. Not only does it hold up after all these years, it also outshines most modern movies of its type. There are no lazy plot twists such as characters going crazy or trying to sabotage the rest of the team. Like the Martian, this tells the story of a group of smart, determined people pulling together to save stranded astronauts. What is even more amazing, this story is true.

If you liked The Martian, you might love Apollo 13.
28 people found this helpful

MahugReviewed in the United States on July 19, 2020
1.0 out of 5 stars
Really I thought this was about going to the moon.
Verified purchase
Ok, yes they go to the moon, but it focuses on other things a lot more than the mission. It starts with the captain of Apollo 13 watching the first man on the moon, I sniped most of the party seen so I can not tell you if there is anything filthy in that seen. (I am sure there was once I watched a little more of the movie). Right after this I skipped a seen when the main carter was kissing his wife. I am not really like kissing (I am a male what do you expect?) but I can deal with it, but he seemed to be getting a bit too much into it to the point it was disturbing.

Well me an my family thought it was smoothing out, but then it shows a guy who was not clothed with his wife with only a towel badly covering herself. (What is the point about this move about again? Oh the moon right? Then why are we not showing that more?)

Well we skipped a good portion of the movie, hoping when they got into space it would start to be more interesting. No. It kept going to dramatic things, and when the move showed some day taking a shower we turned it off. What does some woman in a shower have to do with going to the moon?

All in all, going to the moon was in the background for most of the movie and the main focus was on adult themes. Don't know if it got any better, and I did not bother.
4 people found this helpful
See all reviews
Back to top
Get to Know Us
Make Money with Us
Amazon Payment Products
Let Us Help You
EnglishChoose a language for shopping. United StatesChoose a country/region for shopping.
© 1996-2022, Amazon.com, Inc. or its affiliates