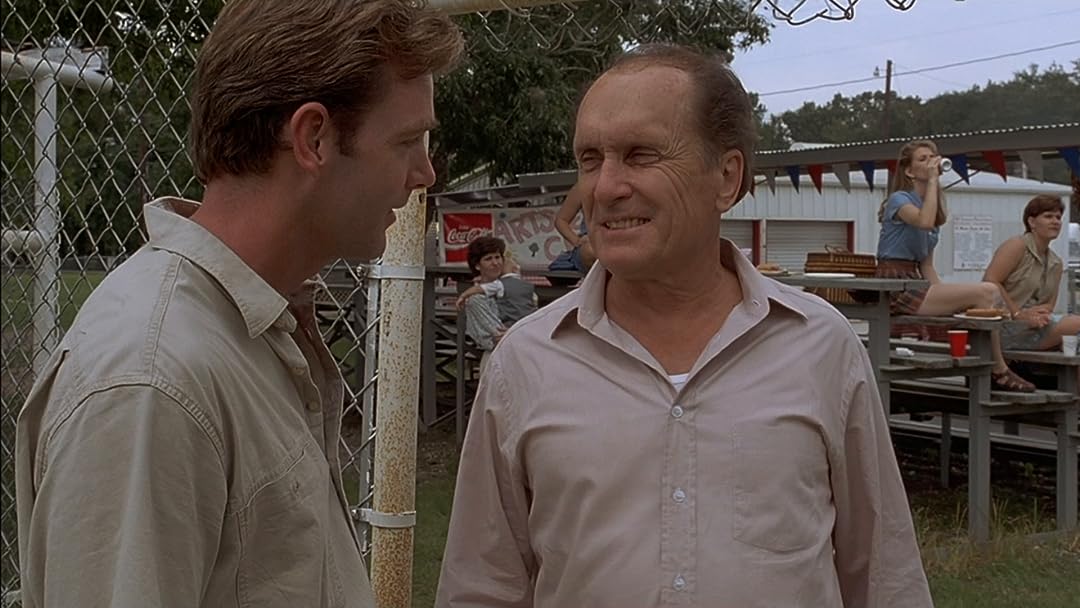 (1,218)7.22 h 14 min1997X-RayPG-13
In his Academy Award-nominated performance, Robert Duvall is Sonny, a gifted Southern preacher loved by his community until he commits a crime of passion and is forced to run from the law.

Lizzy CReviewed in the United States on May 10, 2020
5.0 out of 5 stars
A STORY ONLY ROBERT DUVAL CAN TELL
Verified purchase
Robert Duval is a genius with his acting skills!!! I've been to a Pentecostal church and the preachers are always on fire and Mr. Duval got it dead on. He also depicted Christians as sinners needing a savior. "For I have not come to redeem the healthy but the sick."

I recommend this movie for one simple reason, actually two, the first is Robert Duval and the second is a story of forgiveness and redemption only Robert Duval can tell.

Dark vaderReviewed in the United States on June 16, 2017
5.0 out of 5 stars
YOU WANT TO SEE A 4 STAR MOVIE? THEN WATCH THE Apostle
Verified purchase
ONE OF THE GREATEST MOVIES I'VE EVER SEEN. Robert Duvall really shines in this movie.. It's a beautiful story about seeking forgiveness and then going out and doing the work. I've watched this movie 6 times and every time I see Farrah Fawcett, my heart skips a beat. Although she was sick, that true beauty still shined through. A must see with the family. Spoiler alert The last scene with Robert preaching in the church before going to jail, is an absolute masterpiece. Love Robert and Billy Bob Thornton too. An excellent cast all the way around.
12 people found this helpful

Jeffrey HopeReviewed in the United States on March 15, 2021
5.0 out of 5 stars
A highly under-rated, magnificent piece of cinema written, directed, and starring Robert Duvall.
Verified purchase
The Academy of Motion Pictures in Arts and Science over there in Hollywood is not a perfectly moral institution. If it was, Robert Duvall would have won an award -- if not for his powerful performance of a character that epitomizes the complexity in the human being and in human life then for the very gripping storytelling as both writer and director. The Oscars really dropped the ball on this one. Duvall is known as a highly talented actor but not particularly known for his screen writing or directing, but in "The Apostle", he just dazzles. All of the acting performances including Duvall's was just outstanding, but the one supporting role that seems to me was the most challenging to pull off was that of Sammy, portrayed by the very gifted Walter Goggins. Wikipedia doesn't even list this role as one of his finest, but I have a hard time understanding why it wouldn't be. Character actors who tend to have smaller roles are often overlooke, but here we are talking about an under-rated actor in an under-rated film.
There are so many good things about this film, including the fact that it was filmed on location with the use of local citizens as supporting actors, it is difficult to point to one thing I like the best about Apostle. But if I was cornered and forced, it would have to the artistic skill in Duvall's directing abilities. In the main final scene in the movie when EF decides to continue with the sermon even though the state troopers are waiting for him at the door and outside of the church, the way Duvall was able to show the wide range of emotions from the church members, how those emotions changed in some, where in some it didn't, captured the complexity in our society I think. There was one short clip of the one member kind of saddened and dismayed whereas another member, in the same shot, was still carrying on in religious praise -- all in the back drop of the very stoic, no nonsense state troopers outside ready to make the arrest. I don't give the film it's full justice, but this is one that everyone, at least in the United States, should see. It should be seen in schools and studied in colleges, it's that good.

Daryl IrelandReviewed in the United States on August 11, 2021
5.0 out of 5 stars
Has to be based off Pastor John Osteen"s life !!! GREAT MOVIE
Verified purchase
This movie has to have been written based off Lakewood Church's original pastor, John Osteen! (Do not mistake that for his son Joel) The parallels are uncanny and far to much in sync to be just a coincidence! Both based in southern Texas!, both Pastors built a mighty church & was then thrown out of their own church!, Both had previous wives that left them!, Both found new & better lady's fond of the church! Both started a new church from an old dilapidated building and started again from NOTHING! Both churches again had meteoric rises! Top it off with Robert Duvall looking & "sounding" 100% like John Osteen! Robert Duvall had all of John Osteen's mannerisms and body movements down 100%! He even used many of Pastor Osteen's words & quips! If you don't believe .. watch the movie, then go over to YouTube and search, watch a couple of Pastor John Osteen's sermons! This was recommended to me, and I surely enjoyed it! FIVE STARS

Kindle CustomerReviewed in the United States on June 27, 2016
5.0 out of 5 stars
Stunning execution of a unique concept
Verified purchase
My brother recommended this one to me, and I'm glad he did. Duvall's character is as well developed, complex, and consistent as any I've seen recently, and I've been watching a lot of movies. The scene inside the church near the end seems drawn out, but overall the show has great pacing. Billy Bob Thornton could have added more to the show had he been given the opportunity, but I'm a big Billy Bob fan and others may think we see enough of him as it is. I've been trying to catch up on good flicks I missed when they first came out. This one wasn't even on the list. I'm grateful my brother filled that gap.
9 people found this helpful

NikkiReviewed in the United States on February 23, 2021
5.0 out of 5 stars
Great Evangelistic Movie About a Man with Flaws
Verified purchase
Great movie about a flawed Christian character. The acting and casting were great. Loved Billy Bob Thornton's part in the movie. Farrah Fawcett shines as well as John Beasley and others. Also liked the guy who played Sam in the movie and his final scenes in the movie. The preachers and church members and extras including the Brother he met while fishing were great and authentic. The last church scene was very well done and was very dramatic. Also liked the final scene after the credits role. Overall, this was a great evangelistic movie about Jesus Christ and the holiness Pentecostal denomination, but it also showed that sin has consequences.
One person found this helpful

LAN GuyReviewed in the United States on September 21, 2017
5.0 out of 5 stars
Under Appreciated Masterpiece
Verified purchase
I am a great fan of Robert Duval and this was a "labor of love" for him. He worked long and hard to make this film.

I enjoy rewatching every few years.
9 people found this helpful
See all reviews
Back to top
Get to Know Us
Make Money with Us
Amazon Payment Products
Let Us Help You
EnglishChoose a language for shopping. United StatesChoose a country/region for shopping.
© 1996-2021, Amazon.com, Inc. or its affiliates