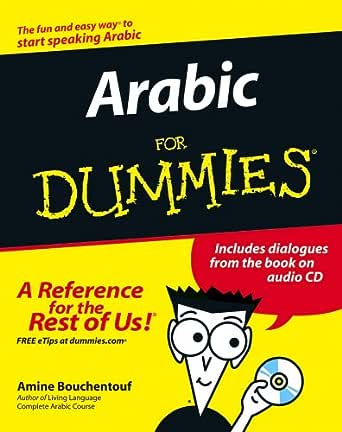 Flip to back Flip to front
Audible Sample Playing... Paused   You are listening to a sample of the Audible narration for this Kindle book.
Learn more
ISBN-13: 978-0471772705
ISBN-10: 0471772704
Why is ISBN important?
ISBN
This bar-code number lets you verify that you're getting exactly the right version or edition of a book. The 13-digit and 10-digit formats both work.

Regarded as one of the most difficult languages to learn for native English speakers by the U.S. State Department, Arabic is gaining both prominence and importance in America. Recent world events have brought more and more Americans and other English speakers into contact with Arabic-speaking populations, and governments and businesses are increasingly aware of the importance of basic Arabic language skills. Arabic for Dummies provides you with a painless and fun way to start communicating in Arabic.

Why should you learn Arabic? Well, besides the fact that over 200 million people in more than 22 nations use it to communicate, there are tons of reasons to get up to speed this 1,400 year old language, including:

Arabic For Dummies presents the language in the classic, laid-back For Dummies style. Taking a relaxed approach to this difficult language, it’s packed with practice dialogues and communication tips that will have you talking the talk in no time. You’ll get the scoop on:

The book also includes an Arabic-English dictionary, verb tables, and an audio CD with dialogues from the book to help you perfect your pronunciation. Written by a native Arabic speaker who helped start a year-round Arabic department at Middlebury College, Arabic For Dummies is just what you need to start making yourself understood in Arabic.

Note: CD-ROM/DVD and other supplementary materials are not included as part of eBook file.

Your survival guide for everyday words and expressions

Your fun and friendly guide to Modern Standard Arabic

This unintimidating guide will help you start speaking Modern Standard Arabic — beginning today! Whether you're a student, a traveler, or you work in business or government, you'll find it's packed with practical lessons, cultural facts, and handy references — including coverage of written Arabic, an Arabic-English mini-dictionary, lists of vital verbs, and more!

Amine Bouchentouf is a native English, Arabic, and French speaker born and raised in Casablanca, Morocco. Amine has been teaching Arabic and lecturing about relations between America and the Arab world in his spare time for over 4 years and has offered classes and seminars for students at Middlebury College, the Council on Foreign Relations, and various schools across the United States. He runs and maintains the Web site www.al-baab.com (which means “gateway” in Arabic).
Amine graduated from Middlebury College and has always been interested in promoting better relations between the West and the Middle East through dialogue and mutual understanding. Amine published his first book,
Arabic: A Complete Course (Random House), soon after graduating college in order to help Americans understand Arabic language and culture. He has written Arabic For Dummies in an attempt to reach an even wider audience with the aim of fostering better relations through education.
He holds a degree in Economics from Middlebury and has extensive experience in the arena of international investing. He is a registered investment advisor and is a member of the National Association of Securities Dealers. Amine is currently working on his third book, Investing in Commodities For Dummies (Wiley Publishing).
Amine is an avid traveler and has visited over 15 countries across the Middle East, Europe, and North and South America. Aside from his interest in languages, business, and travel, Amine enjoys biking, rollerblading, playing guitar, chess, and golf. He lives in New York City. --This text refers to an out of print or unavailable edition of this title.

F. Christy-Ali
3.0 out of 5 stars Good reference manaual
Reviewed in the United States on January 2, 2008
Verified Purchase
I have used the "for dummies" books in other subjects before and they are great tools, especially the pictures & tips. The DVD is a great added supplement. It is better to hear natives speak to train your ear for the different dialects when studying languages. I have been studying Arabic for a long time, I also tutor Arabic speakers(in English). I mainly purchased this book for a reference source, as it contains a lot of reminders that are very useful and helpful especially the grammatical rules I had forgotten since my first class.
Read more
One person found this helpful
Helpful
Report abuse

Stephen
5.0 out of 5 stars Good For Learning MSA Grammer
Reviewed in the United States on June 4, 2019
Verified Purchase
It covers quite alot of written Modern Standard Arabic. I use this along with Pimsleur.
Read more
One person found this helpful
Helpful
Report abuse

Gigi
2.0 out of 5 stars Not as simple alone would hope...
Reviewed in the United States on March 2, 2013
Verified Purchase
The content is difficult and doesn't appear to flow smoothly. I was lost in this book and never quite got it. Mind you, Italian for Dummies I found extremely helpful! Is it the language, Arabic, that's so confusing? Perhaps. Perhaps it is one that cannot be summed up in this format. Disappointing.
Read more
Helpful
Report abuse

Awakened2004
5.0 out of 5 stars Great Reference Guide To Help Beginners Understand Arabic!!
Reviewed in the United States on May 16, 2015
Verified Purchase
Great Reference Guide f to Help Beginners!
I ordered this book for my son who is just beginning to learn Arabic. He was very impressed with it and says its just what he needed as a reference. The explanations and examples were clear, concise and easy to understand.
Read more
Helpful
Report abuse

gardener
5.0 out of 5 stars Arabic taught in transliteration
Reviewed in the United States on January 11, 2017
Verified Purchase
Still waiting to start the book. Arabic is taught using transliteration which makes it much easier as it uses English letters.
Read more
2 people found this helpful
Helpful
Report abuse

candice strauss
3.0 out of 5 stars Three Stars
Reviewed in the United States on March 25, 2018
Verified Purchase
fast delivery but not what i thought it was... needed more of a lesson book, but its still good
Read more
Helpful
Report abuse

harriet
3.0 out of 5 stars basics of grammer
Reviewed in the United States on December 7, 2013
Verified Purchase
because it is harder than I expected.but is introducing it in a good way.just will take longer than expected.the book itself is well laid out in sections that you can bounce through according to what you want to learn
Read more
Helpful
Report abuse

Amina Yusuf
5.0 out of 5 stars great book
Reviewed in the United States on December 14, 2012
Verified Purchase
I received my book is the best amount of time. I enjoyed this book very very much. I plan on buying many more books from them. Thank you so much.
Read more
Helpful
Report abuse
See all reviews

Issa
3.0 out of 5 stars Don't buy this version, buy the newer one
Reviewed in the United Kingdom on August 10, 2014
Verified Purchase
The book is okay. I kinda skipped through the first pages because I already knew how to read and the basics, but If you don't know any Arabic whatsoever I would NOT recommend this version for absolute beginners. The words are written with Latin letters in a way that makes them impossible to pronounce correctly and the pronunciation part of the Latin letters is even worse. I sometimes have to Google the words just so I can pronounce them correctly. There are also a lot of misspells and wrong use of words. The audio in the CD sometimes uses other words than written in the book.
I instantly regretted buying this version. If you can read a little Arabic BUY THE NEWER version (2nd edition). It is written partly with Arabic letters, making it easier to practice the reading while learning. Moreover the "latinization" of the Arabic words are also more correctly written, so you actually have the opportunity to pronounce the words perfectly. I have had a glance at the newer version and it seems like the author is using some better words for of the translations. Therefore the two versions are a bit different from each other.

However the book is not entirely hopeless. It is very simple, and gives you a lot of useful grammatical tables and useful sentences. It has some great explanations of the Arabic culture, and it is not boring at all. I still use it to learn and I have learned a great deal from it. It is also categorized into different topics with minimal grammar making it more fun to learn. But be sure you pick the right version because a returning/trading it CAN be expensive.
Read more
5 people found this helpful
Report abuse

Maria Papagiani
1.0 out of 5 stars Totally unsuitable for learners
Reviewed in the United Kingdom on November 18, 2018
Verified Purchase
This book is a very unpleasant surprise for someone who tries to learn Arabic. The whole book is written in transliteration and not a single Arabic character appears in 364 pages! I paid good money to buy a completely useless book for my Arabic learning. I find it very disappointing that this is not made clear to customers, who are blatantly misled by the description! I am sorry to say it is actually a purchase for dummies.
Read more
2 people found this helpful
Report abuse

Holiday5151
5.0 out of 5 stars Simple
Reviewed in the United Kingdom on August 8, 2013
Verified Purchase
This book makes learning Arabic simple. But the problem is it mainly provides the Latin written of Arabic. It make readers easy to recognise, but the end the result will be the readers cannot read Arabic. If it provides Arabic alongside the Latin, it would be much better.
Read more
2 people found this helpful
Report abuse

BHS
1.0 out of 5 stars Did not match expectation
Reviewed in the United Kingdom on April 26, 2013
Verified Purchase
Trying to learn Arabic by reading transliterations makes a difficult task twice as hard. I found the explanations incomplete and confusing. Unless you are studying with an Arabic speaker I would recommend you avoid this one.
Read more
One person found this helpful
Report abuse

Terri
5.0 out of 5 stars got my work cut out here !!
Reviewed in the United Kingdom on August 25, 2012
Verified Purchase
I knew this was not going to be as simple as it sounds - "learn some Arabic" - but the book does make it easier to follow. The book containes full help on pronunciation and how to actually SAY the words - very helpful.
Read more
2 people found this helpful
Report abuse
See all reviews