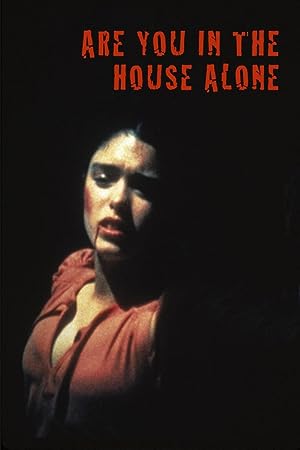 Are You In The House Alone?

(53)
5.71 h 36 min197818+
A lovely high school student becomes the target of a campaign of terror when she begins receiving warning notes in her school locker from someone claiming to know her.

AnnesthesiaReviewed in the United States on December 3, 2019
3.0 out of 5 stars
Not a horror movie. Not sure what it is....
Verified purchase
This is a very good movie. I love the acting, (most of the) casting, cinematography, music, everything. However I don't think this is a horror movie, and I feel like I was misled. If I knew what it actually was, I probably wouldn't have watched it. I will continue with somewhat of a spoiler so.....

This was categorized as horror and I have to dispute that. It really did start out feeling like a halloween-style stalker/slasher flick. But instead it turned into a rape drama. I don't think rape and horror are the same. But this movie is especially upsetting because of the way rape was apparently treated in the 70s. Very uncomfortable final scenes. It's actually enraging and there is no real justice or resolution at the end, which made me wonder what the whole point of the movie was. It ended with a line kind of like "I asked my lawyer why there was no justice for rape and she said it's because the system is wrong." end of movie. Most characters brushed off the seriousness of the crime, and the victim herself was confused about it too at first. It was kind of like "aw man, he raped me! that's so mean!" It had a lifetime movie kind of vibe to it, except there was no justice or closure as we would have had on lifetime. It also had almost an educational vibe to it, except there didn't seem to be proper views on rape in the 70s to have educated us, the audience, so there was not actually any education. Like another reviewer said, it portrayed the creepy objectification of a female. The thing is, she NEVER seemed bothered by it at ALL (until she was raped), so I wasn't sure what the film was telling me. I mean, I've seen very strange remarks and comments in older films that didn't mean anything, so I wasn't sure if I was just supposed to disregard the teacher's overuse of the word "sexy" for example. Anyway... So this film - it wasn't entertainment, it wasn't EDUtainment, and it wasn't revenge or justice based. What was it then? I don't know. And what a strange message... that the victim should go back to life, to school, with her rapist, or else, he wins? Weird. weird.

tl;dr - girl is pretty. girl gets stalked in slasher-flick fashion. girl gets raped. no one cares. she goes back to school. eventually rapist transfers schools. the end!

Robin Still RocksReviewed in the United States on June 8, 2015
4.0 out of 5 stars
A MUST SEE HISTORY LESSON for young women and women who lived through the 70's and 80's.
Verified purchase
I rated this higher; recalling the 1978 movie, as a teenager. For 1978, I found it compelling. A blast from the past. I really enjoyed this movie at 17.

Kind of kicked in the head watching it in 2015.

Females. We haven't come as far as we should have. The sexualization of young women, by male and female classmates, the inappropriate sexualization by a male teacher; a vicious rape and what to do about it; a family matter; the mother (a beautiful Blythe Danner) speaks up about how there was going to be a problem in reporting it..."she's not a virgin." The creepy, abhorrent musings about our poor young heroine; 'leading him on.' Lousy reactions from a best friend and boy who claims he loves her.

Young women and women of all ages need to sit down and experience this movie. The creepiness of being objectified. The submissive, titillating, exploitation that reflects a not-so-long-ago reality. What I found scary at 17; I find horrific at 54. To think I wasn't paying attention.

The most scary part of this scary movie: What it was like to be a girl in the 1970's.

Old and in the wayReviewed in the United States on May 21, 2016
3.0 out of 5 stars
Are You in the House Bored?
Verified purchase
Perfectly typical early 70's made for TV exploitation movie. It's licentiously shocking theme is the bait, intended to attract viewers. A beautiful teenage girl is being stalked. Who could it be? No one takes her seriously. Will she end up being attacked? Raped? Murdered? Stay tuned & find out. Inspired by better theatrical thrillers of the time, it starts off like a promising above average drive-in "B" thriller. It's weak, yet has it's moments & although it could pay off in the end, ultimately it's a low budget quickie & fails. Just when it should be it's most exciting, it hasn't the energy. When it should be it's most compelling, it becomes melodramatic & corny. The message at the end, which was also typical of 70's TV, felt tacked on, as if it was an afterthought by a TV exec. The cast was alright: Blythe Danner, Dennis Quaide & lead Kathleen Beller, who left acting so long ago I'd forgotten about her, head a talented cast, but can do little with this script, dialogue & director. As a slice of a pre-cable exploitation TV program, disguised as topical & relevant, it is interesting. Lifetime Channel dramas are probably its modern successors & there are many people who love them. They do have a certain charm.
2 people found this helpful

Daniel T. DeganReviewed in the United States on October 8, 2015
5.0 out of 5 stars
Are you in the House Alone? TV movie that delivers good performances worth watching.
Verified purchase
The TV version of "When a Stranger Calls" is as good as TV movies go! Kathleen Beller (Dynasty's Kirby Anders) shines as Gail, a high school student tormented by notes and phone calls. Blythe Danner plays Gail's Mom and a young Dennis Quaid is even in this movie. Predicable stalker movie but still enjoyable to watch. I remember watching this movie when I was 9 and then again as a teenager. Still one of my favorites as TV movies go!
One person found this helpful

STACY M.Reviewed in the United States on May 24, 2021
1.0 out of 5 stars
After School Special
Verified purchase
This is not a horror movie. More like a tv movie of the week. Slow and boring.

J. WhiteReviewed in the United States on October 31, 2015
2.0 out of 5 stars
Skip it.
Verified purchase
Rubbish! It started out decent enough but had me eventually fast-forwarding to scenes that weren't horrifically schmaltzy. I even fell asleep through part of it and didn't bother to go back and catch what I'd missed. The strongest emotion it stirred in me was anger that rape was previously treated in such a despicable manner. Don't waste your time.
2 people found this helpful

Jerry MeyersReviewed in the United States on May 2, 2021
3.0 out of 5 stars
not bad
Verified purchase
its ok

RUTHANN DANIELSReviewed in the United States on January 4, 2018
5.0 out of 5 stars
Love This Movie
Verified purchase
Love this movie and now I can watch it anytime I want to.
See all reviews
Back to top
Get to Know Us
Make Money with Us
Amazon Payment Products
Let Us Help You
EnglishChoose a language for shopping. United StatesChoose a country/region for shopping.
© 1996-2021, Amazon.com, Inc. or its affiliates