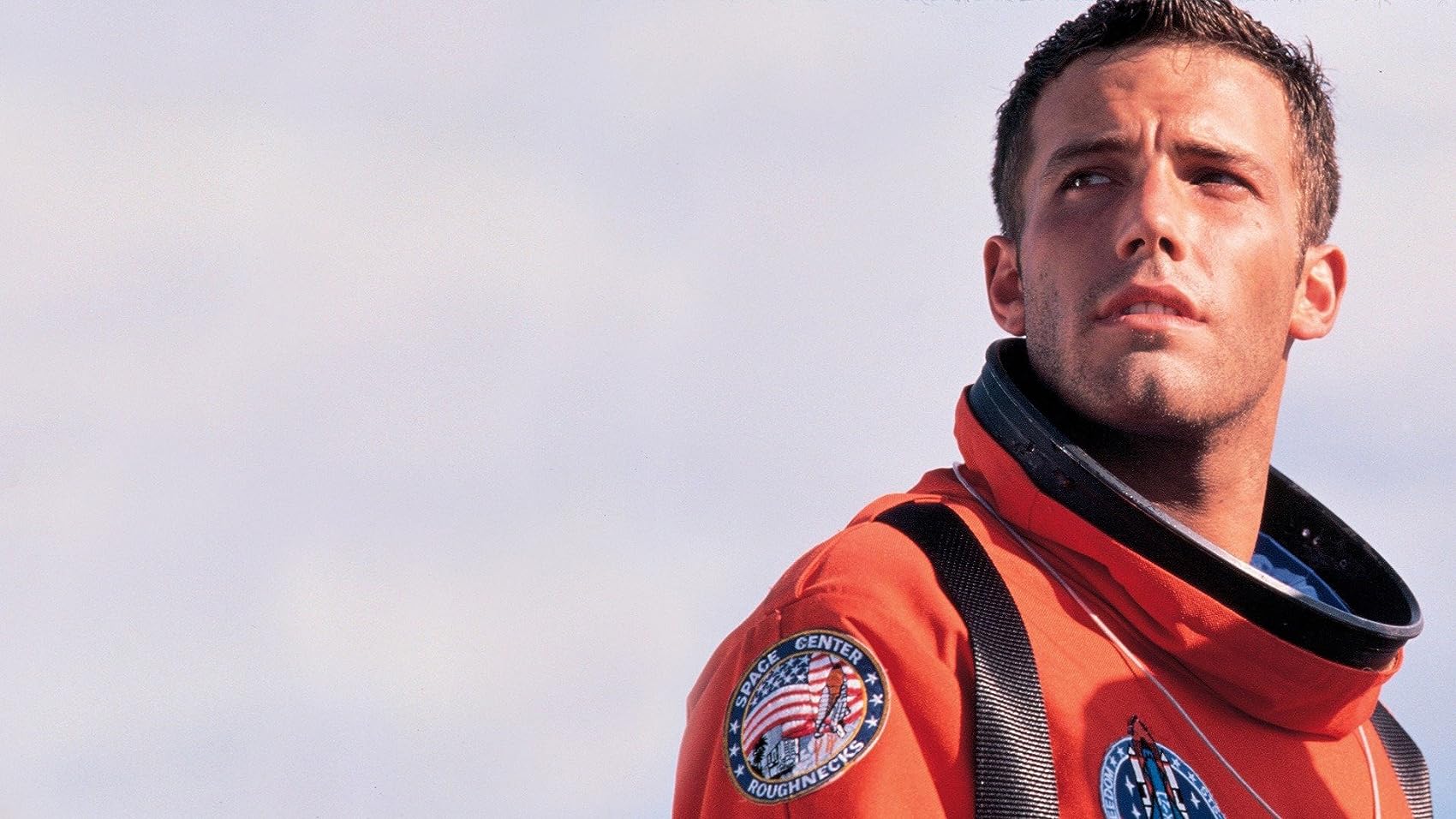 langleybcguyReviewed in the United States on November 5, 2017
5.0 out of 5 stars
A surprising inclusion in the 'Criterion Collection'
Verified purchase
The 'Criterion Collection' release of 'Armageddon' was a surprise; I didn't think that they would offer a release of 'popcorn' movies like this one. Having said that, the release of it shows a good deal of extra material not seen on previous releases. A few minutes of additional footage is woven into the film here, mostly when Harry visited his elderly father (played by Laurence Tierney, I believe) and some additional footage with Harry & Dan Truman (Billy Bob Thornton) at the Johnson Space Center. Additionally, TV spots and a long list of trailers are available, as well as interviews with some of the cast & crew, including 'background' players such as Jessica Steen (NASA pilot Watts), William Fichtner (Col. Willie Sharp) and Marshall Teague (Col. Davis). Outtakes are also seen in places, and some interesting commentaries are included, such as those from NASA officials as well as scientists familiar with the very real threat asteroids such as this fictional one might pose. The 1 problem is the aspect ratio that it's presented in; it doesn't fit my widescreen HDTV. That's the only complaint I have which isn't really enough to undermine it.

This is worth picking up for any fan of the film!

ReviewReviewed in the United States on November 25, 2019
1.0 out of 5 stars
A Noisy and Rambunctious Assault On the Senses
Verified purchase
Armageddon was released in June of 1998 but the more serious and engrossing version of the same type of story about a large asteroid on a collision course with earth was offered by the film 'Deep Impact' a month earlier featuring an amazing Tea Leoni as reporter Jenny Lerner. Seems like one studio was not going to be outdone by the other so coughed up 'Armageddon' which is a noisy and rambunctious assault on the senses and fails to deliver anything particularly meaningful about a human extinction event.
12 people found this helpful

Jim EcoinedReviewed in the United States on May 24, 2019
5.0 out of 5 stars
This movie is the king of disaster movies and one of Bruce Willis's best movies.
Verified purchase
The idea that an asteroid could break away from the asteroid belt and head towards earth is not new.This story starts fast and never stops until the end. A number of side stories about Bruce's oil drilling team keeps the film moving. The team is forced (or leave it to a group of astronauts who know nothing about deep drilling) nto going on a mission to the largest asteroid to drill 780 feet into the asteroid, put a nuclear bomb into he hole, take off and remote detonate. Whoops the remote detonation button won't work so someone has to stay behind to manually detonate the bomb. A great action movie.
14 people found this helpful

Dr. PaulReviewed in the United States on March 30, 2021
5.0 out of 5 stars
Great date night film for us
Verified purchase
Ok, I’ll be honest, I’d be fine giving Armageddon a 4 star rating, but my wife loves it and made me promise I’d do 5 - so there is your 5. Hey, it’s a good movie - a typical action film with an all star lineup. Several years old now, it also holds up with time. I get a bit bored at times - mainly the unending landing sequence and the - for me - bit over the top ending. But... my wife loves it. Together we’ve watched it at least half a dozen times and she’s done even more.

This is the (unlikely - but aren’t all action films better when unlikely - story of a bunch of guys who work an oil rig and their crusty leader (Willis), plus his really smart daughter - heading to an astroid to save us back here on earth. Totally realistic. That’s not the point... the point is a wild ride through space and the hero’s save the day (at the last minute) and of course, it pays off.

Funny moments, tense moments, and a great ending - with a touch of sadness. All the ingredients. So date night or rainy days or... whatever... we love it - hope you do too.

RPReviewed in the United States on September 8, 2021
1.0 out of 5 stars
Awful
Verified purchase
I tried to watch this movie. Honestly. But finally gave it up as a bad job all around. First, seems like almost every Hollyweird movie involves a plot about saving the world. Talk about over used. The actors struggled mightily with an awful script but to no avail. Even big name actors could not save this re-heated mush of a movie. Secondly, the "science" in this was ridiculous with no thought given to actual science. You have to swallow a lot in order to watch this, but it is not worth the effort.
5 people found this helpful

Mitch10Reviewed in the United States on September 19, 2021
2.0 out of 5 stars
It's Bad Even For A "Bad Science" Movie
Verified purchase
I enjoy some bad science Sci-fi, but this one is especially bad. I'm not saying a killer space rock can't hit Earth, or that humans couldn't theoretically deflect it, just that EVERYTHING else is wrong. From the spiky terrain on the asteroid to the inconsistent gravity, the writers did do a second of due diligence. For that matter, why did the shuttles have to fly through the particle wake? Why couldn't they have flown next to it and then landed on the leading side? Oh right, having everyone live wouldn't have been exciting enough. If that isn't bad enough, you can guess the plot and who dies without even watching. The directing is at best, A B-Movie and the special effects are almost as good as Mars Attacks. I found myself checking my phone and reading email while watching this snooze fest. The only reason I watched to the end is I like Bruce Willis' style of acting.
3 people found this helpful

joel wingReviewed in the United States on June 8, 2020
3.0 out of 5 stars
Ridiculous plot but they play around with it which is its saving grace
Verified purchase
Armageddon is one of those stories that only Hollywood could come up with. It was a big budget Michael Bay thriller where a meteor was going to hit the Earth and destroy all life. They come up with a plan to drill a hole into the meteor and place a nuclear device inside of it to knock it off course. They get an oil drilling team led by Bruce Willis to do the job because oil workers can be trained in just a few days to operate in space. Thank god they played fun with it otherwise this film would be too ridiculous.
C
6 people found this helpful

Jason B.Reviewed in the United States on May 4, 2022
1.0 out of 5 stars
Deep Impact is better
Verified purchase
This movie came out when I was a teenager. When I watched it at the time, I thought it was stupid and couldn't understand why everyone I knew loved it. It was such a sensation and I felt at the time that it was contrived or engineered to appear to be more liked by the general public then it actually was.
Now all these years later, it shows up for free on Amazon prime and I figure I'll give it another go. Who knows, maybe I was just a dumb kid and didn't get why it was so good then.
Nope, it's still the same stupid movie. Not only is the plot over-sensationalized, but it is as though they decided to make a movie about modern science that decides to be magical. As I'm watching this movie, it's hard to imagine the writers knew so little about science. It is as though they knew things but decided it wouldn't make a good movie so just disregarded them.
This movie has not aged well. Again, I'm flabbergasted as to why it has so many great reviews on Amazon. The only thing that saves it is the acting, but the actors are given such horrible lines that even Hollywood legends like Bruce Willis and Ben Aflack can't pull it off.
I have determined to finish it, even though it's taking me almost 5 days and I'm still not done. I just keep turning it off.
But this was like an icon of my school years, so I'm trying to finish it, but my brain hurts from the badness.
Please, don't watch this movie. It hurts.
2 people found this helpful
See all reviews
Back to top
Get to Know Us
Make Money with Us
Amazon Payment Products
Let Us Help You
EnglishChoose a language for shopping. United StatesChoose a country/region for shopping.
© 1996-2022, Amazon.com, Inc. or its affiliates