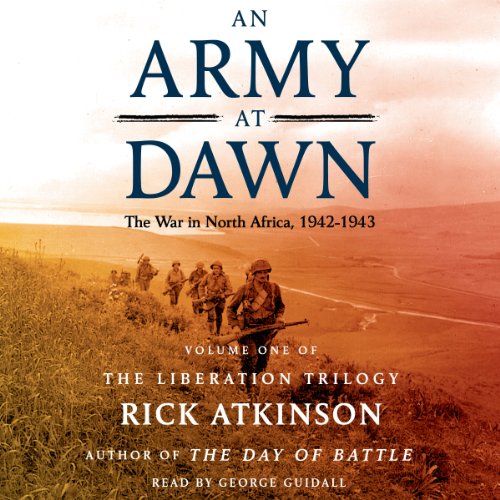 List Price: $46.95
You Save: $5.87 (13%)
By completing your purchase, you agree to Audible’s Conditions Of Use
Sold and delivered by Audible, an Amazon company
Share

4.6 out of 5 stars
4.6 out of 5
1,868 global ratings
How are ratings calculated?
To calculate the overall star rating and percentage breakdown by star, we don’t use a simple average. Instead, our system considers things like how recent a review is and if the reviewer bought the item on Amazon. It also analyzes reviews to verify trustworthiness.

hudunit333
3.0 out of 5 stars Sensationalized
Reviewed in the United States on September 10, 2018
Verified Purchase
I am halfway through the book and have found several inaccuracies but these are not really significant. The real point is that the author tells the story through a sort of condescending "Monday Morning Quarterback" style. This was a citizen army rushing into it's first ever major league conflict. The author seems to sort of have a joke about the shortcomings of the allies. I wouldn't read this as a first learning of the conflict. It's OK if you are quite familiar with what actually happened already. It is a kind of story composed of anecdotal pieces, interesting, but does not really combine to give the whole story. I feel that the author tried to make the work more interesting and entertaining rather getting to
the heart of the matter. I admit that I am only half way through the book but that is increasingly my impression.
Read more
43 people found this helpful
Helpful
Report abuse

PTM
3.0 out of 5 stars Detailed, Thorough, Fascinating but Emotionally Exhausting and Overwrought At Times
Reviewed in the United States on April 4, 2019
Verified Purchase
This is a masterful recounting of the North African Campaign and I've been both listening to it and reading it, and in both formats it is emotionally exhausting. And it is extremely confusing listening to it without benefit of maps to help you place where any given battle, meeting, city is located, so be aware of that. It's not an easy book in audio edition. Reading helps quite a lot, but here I notice the author's penchant for using obscure vocabulary, in a way that simply begins to feel pretentious and overwrought. But only one of hundreds of examples, "They glanced at the windrows of corpses in their white shrouds and looked away." Windrows? Seriously. Why not simply, "Row upon row of corpses." Where simplicity would have lent added rhetorical power, the author too often chooses obscurity and pedantry.

What impressed me most about the narrative is the meticulously researched and documented evidence provided to show how indeed the Americans had a lot of learning to do, from the Eisenhower down to the lowliest private, and to read of the mistakes that resulted in the death of so many is heartbreaking and infuriating.
Read more
16 people found this helpful
Helpful
Report abuse

Pat
4.0 out of 5 stars Refreshing and Unique View of the North African Campaign.
Reviewed in the United States on August 25, 2017
Verified Purchase
Atkinson is a gifted writer with a talent for presenting WWII combat in blunt, unadorned prose faithfully describing the chaos, terror, emotional shock, pathos and savagery of each battle. As an additional bonus, the author focuses on the ordinary American infantryman and the American home front, two heroes often given short shrift in WWII non-fiction books. Using his talent for almost lyrical prose, Atkinson can make you experience the frustration, fears and hopes of ordinary soldiers fighting desperate battles - the sense of stark realism is tempered by his compassion for ordinary soldiers attempting to follow orders, orders both foolish and brilliant. Atkinson also acknowledges our debt to the American home front which produced an abundance of weapons, supplies and food which powered not only the American forces but the Brits, Russians, Chinese and Canadians on various fronts. His description of a small Iowa town receiving a blizzard of "We regret to inform you" telegrams from the War Dept. after a single, bloody battle conveys a sense of the shock and despair experienced by the town's residents upon learning that many of their sons had died in combat - a truly moving depiction of the grief shared by a close knit community of average Americans.

However, Atkinson shares an obsession held by many historians. He drags the reader through the childish politics of the North African war, the oft told tale of the Darlan incident, the juvenile antics of Churchill and Roosevelt touring the countryside after their self serving conference in Casablanca and the feud between British and American generals detailing the Brits' national inferiority complex over American efforts to assist them and the American's unwarranted feelings of inferiority toward a British military who retreated in France, were hastily evacuated, had their capitol city thoroughly bombed, surrendered an impregnable fortress in Singapore and after many initial failures finally managed to stand up to the Germans in Africa. If you're looking for a Homeric tale of heroes like Achilles and Hector - only with Eisenhower and Montgomery playing the hero role then this isn't the book for you. Atkinson is unimpressed with our various Great Men but he consistently tries to be fair in his criticism of their faults. Overall, an excellent WWII history with the exception of tedious political squabbles.
Read more
24 people found this helpful
Helpful
Report abuse
See all reviews

Keith F. Massey
5.0 out of 5 stars A very thorough account of the campaign
Reviewed in the United Kingdom on March 24, 2021
Verified Purchase
I found this a very readable and thorough account of the allied campaign in North Africa and Tunisia during 1942/43.
Although written by an American and so from the American perspective I felt the author was fair and balanced in his approach. He is equally fair in his criticisms and goodness knows there was plenty of scope for it.

The accounts of the early attempts to seize ports by surprise were revealed as complete fiascos resulting in the deaths of many brave men. It's as though the Dieppe debacle had never happened.

The author gives an insight into the lot of the men doing the fighting as well as the political wrangling and a neat critique of the commander's both senior and junior as the story progresses.

Well worth reading in my view and difficult to put down once started!
Read more
Report abuse

Alyson Burrell
5.0 out of 5 stars Excellent book for the WWII junkies
Reviewed in the United Kingdom on January 1, 2021
Verified Purchase
Got this for my husband who is a WWII afficianado. He's reading it now and loves it. He's bowled over by the amout of detail. Also, the book is MASSIVE so if you're one who likes to get absorbed into a good book for a nice long time this is for you. Will definitely be getting him the others in the series.
Read more
Report abuse

Dr M J Hardiman
5.0 out of 5 stars I have long wished to follow the exploits of my ...
Reviewed in the United Kingdom on February 9, 2015
Verified Purchase
I have long wished to follow the exploits of my father from north Africa to Italy and thence to Europe with the 8th army - I have read many books on the second world war but Rick Atkinson has put together one of the most comprehensive accounts of these events, accenting the American involvement but giving all the allies due respect, British, Canadian, Polish, French, Nepalese, Indian, African - and all other allies - not mentioned here but of all of equal importance. One of the most important and fascinating aspects of these accounts is the interaction - or lack of - between the few essential commanders who attempted to do the bidding of the planners and the overall commander Eisenhower whose worth seems to have been misunderstood by his self obsessed generals - a genius in keeping a team together and focussed on the goal.
Read more
3 people found this helpful
Report abuse

N. J. Edwards
5.0 out of 5 stars Recommended
Reviewed in the United Kingdom on May 3, 2021
Verified Purchase
Fantastic book. Amazing detail and insight, easy to read. Made a not particularly glamorous part of the war fascinating. Tony never had the makings of a varsity athlete.
Read more
Report abuse

Thomas A. Regelski
5.0 out of 5 stars One of the best war histories I've ever read
Reviewed in the United Kingdom on June 15, 2017
Verified Purchase
One of the best war histories I've ever read. Well written, in terms of the descriptions of people and of the battles, in comparison to historical accounts simply of the facts. Author has a wide vocabulary that he sometimes overuses, sending me to the dictionary (though I've written 6 books myself).
Read more
2 people found this helpful
Report abuse
See all reviews
Back to top
Get to Know Us
Make Money with Us
Amazon Payment Products
Let Us Help You
EnglishChoose a language for shopping. United StatesChoose a country/region for shopping.
© 1996-2021, Amazon.com, Inc. or its affiliates