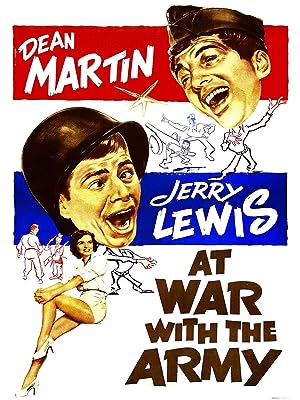 At War With The Army with Dean Martin & Jerry Lewis

(162)5.71 h 30 min19507+
When former business & nightclub partners Dean Martin & Jerry Lewis enlist in the U.S. Army, (in their first starring film ) they have different ambitions. Martin wants to see action rather than the drudgery of his current post. Lewis, who is a klutz, wants to stay out of combat. However, they both have to deal with stern Army personnel while also preparing for an Army variety show. A laugh riot!

JayJayReviewed in the United States on August 19, 2018
5.0 out of 5 starsFantastic Watch
Verified purchase
From a time (prior to the 1990s when political correctness ruined comedy) when comedy was funny. The classic military meme of confusion, incompetence, and slackery is dressed up by the not inconsiderable comedy and acting skills of Dean Martin and Jerry Lewis. My wife was in the Navy and swears that life really was like this, but also argues that, contrary to the song in this film, that she must have missed Naval Caviar Day.

Dean Martin's singing and straight-guy persona paired with Jerry Lewis' slapstick was a formidable combination. Sadly, most people who discuss this pairing act as if Lewis was *the* talent, to the exculsion of Martin. While nobody would deny that Lewis was an incredible talent, Martin's performances on his infamous Roasts and his comedy with the Rat Pack demonstrate that his straight-man comedy chops were not insignificant.

Virginia V.Reviewed in the United States on July 12, 2014
5.0 out of 5 starsGood Family Entertainment.
Verified purchase
Really liked this movie. Slip back into time, when TV still had noise in the picture... looks like gray, black, and white sand overlaying the picture for those younger than I am and haven't had the opportunity to watch TV when it was the newest technology. This will give you a better appreciation for what we now have in viewing technology. We have come so far in such a short time.

Two great movies on one disc. The disc is double sided. One side with Jerry and the other side with Bing.

PeaBrain BubblybuttReviewed in the United States on May 6, 2018
3.0 out of 5 starsHow does Dean Martin keep a straight face?
Verified purchase
I just ROFLMAO whenever Jerry Lewis dork dances. (See him in the Nutty Professor, Cinderfella, Carol Burnett, Sonny n Cher Show) but here @ 39:24, how can anyone on set stay quiet? Its those moments that I find worth plodding through the rest of a sing n dance film. Unless its Lerner & Loewe. Thats the atuff right there...
Report abuse

Daniel ThomasReviewed in the United States on April 30, 2019
3.0 out of 5 stars"We're going to be together a long long time."
Verified purchase
M&L first movie is good for some chuckles but not overly hilarious. The movie is a bit claustrophobic due to most of it taking place on one set, that Lewis appearing in drag, and some not so great musical numbers pull down the movie.
Report abuse

PeppermanReviewed in the United States on December 6, 2016
1.0 out of 5 starsPoor Value and Quality
Verified purchase
Colorized product cover does not make up for the poor quality black and white film with Martin and Lewis starring in "At War With the Army".
Also, the 2nd film on this 2 movie disc did not star OR include these same two celebrities.
I'm glad I didn't pay much for this DVD, but wish I'd not bought it to begin with.
2 people found this helpful
Report abuse

GordonReviewed in the United States on August 17, 2019
5.0 out of 5 starsFunny
Verified purchase
This movie is a classic. It is funny. It has great singing and dancing. It has a lot of very funny slap stick. It is very well done.
Report abuse

Victoria SadlerReviewed in the United States on May 20, 2014
5.0 out of 5 starsGreat movie
Verified purchase
Huge fan of Jerry Lewis and Dean Martin. this is a twofer. Great extras. It really seems to have the authenticity of an older movie because of the way it was filmed. They did't spend any time cleaning it up (film wise). On my way to buying more Martin and Lewis movies. I do recommend this movie especially for the great price.
One person found this helpful
Report abuse

D.A. DrakeReviewed in the United States on April 5, 2018
4.0 out of 5 starsMartin and Lewis; Silly But Fun
Verified purchase
Lewis was a goof and Martin was a bit of an ass, but together they were fun. These films were at the height of their silliness. Innocent goofiness.
Report abuse
See all reviews
Back to top
Get to Know Us
Make Money with Us
Amazon Payment Products
Let Us Help You
EnglishChoose a language for shopping. United StatesChoose a country/region for shopping.
© 1996-2021, Amazon.com, Inc. or its affiliates