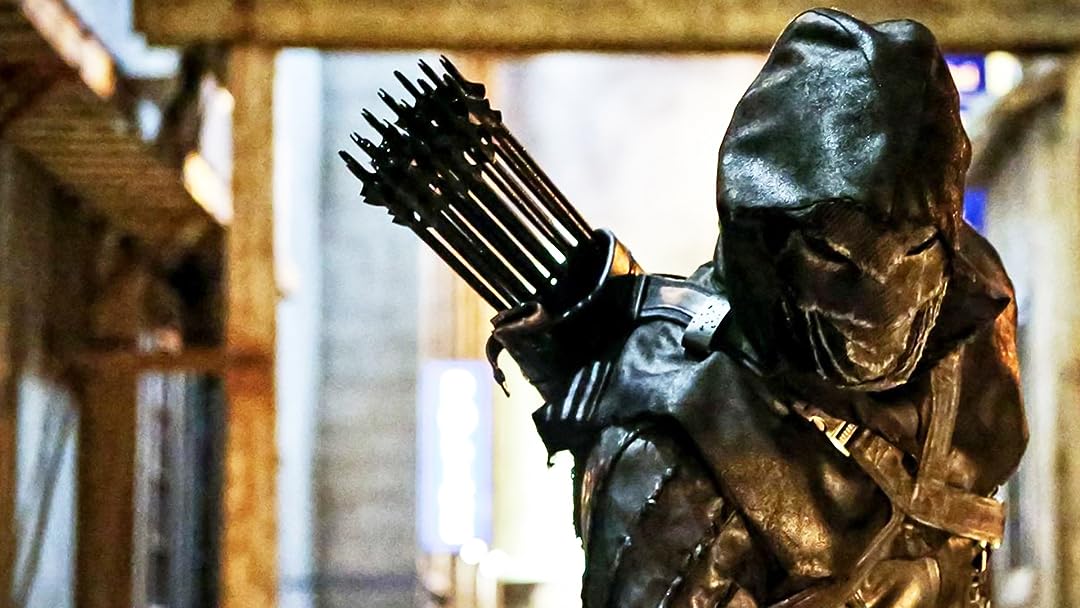 (1,531)7.52017X-Ray13+
Newly appointed Mayor Oliver Queen finds himself challenged as he fights on two fronts for the future of Star City. With Diggle back in the military and Thea adamant about hanging up her hood, Team Arrow is down to just Oliver & Felicity. Meanwhile, the arrival of a deadly new adversary forces Oliver to confront questions about his own legacy, both as mayor and as the Green Arrow.

EOJ-KidReviewed in the United States on January 4, 2020
3.0 out of 5 stars
Missing two Crossover Episodes for two other series
Verified purchase
I'll admit that I haven't been a comic book fan, so I've never been into the super-hero genre. I decided to try this series because it sounded different than things like Superman, Batman, etc. It did start out being different (in a good way) in the first couple of seasons than what I expected. By this 4th season, things are getting pretty far into sci-fi mode with meta-humans and then aliens. But by now I'm hooked on the main characters and no one ever seems to really die - everyone seems to return in some way or other.

The main reason I gave this season a lower rating is because it includes the middle part of a three-way crossover with the first and last part of the crossover in two other shows. The other show episodes were not included in the DVDs for this season of Arrow. What the heck? There was a previous Arrow season with a crossover for the Flash series and both episodes were included in the Arrow DVDs. But not this time. So we don't get the start of the crossover story, we get the middle part of the story in the Arrow episode, and then get left hanging with no completion because the finale is an episode of another series. That's totally bogus!! I almost would have preferred that they skip putting the "partial" episode on the Arrow DVDs than to get this type of bait-and-switch. Obviously the manufacturer assumes you'll rush right out a buy the whole set of DVDs for the other series (and which seasons of those two series would they be in?). This should be illegal.

Gordo nation19Reviewed in the United States on July 29, 2020
5.0 out of 5 stars
Arrow season 5
Verified purchase
Arrow season 5 it's definitely a big improvement from season 4. It's right up there with season 2 and 3. For me season 2,5, and 8 go shoulder to shoulder as the best seasons of the show. This one goes big with the fight scenes, with new characters and with older returning characters, which a new menacing villain, with the crossover, and with an epic finale.
The dvd versions have all the episodes on 5 discs, but doesn't include the entire crossover just the 100th arrow episode which by itself is a great episode. I don't know if the blu-rays have the entire crossover. Overall if you're a fan of the show this is definitely one of the best seasons of the show.

Joshua HReviewed in the United States on November 26, 2017
4.0 out of 5 stars
Hello Kid.
Verified purchase
Not my favorite season but a good one none the less and the return of Manu makes it even better, does it have its filler episodes? Yes but a good villain that is arguably one of the most evil to date and the flashback sequences are entertaining.

Marilyn Jo WeaverReviewed in the United States on August 20, 2019
5.0 out of 5 stars
Arrow season 1-6
Verified purchase
I have all 6 seasons and therefore am writing 1 review for all 6. the dvds are fantatic, more than i could have hoped for. i really love everything about them.
One person found this helpful

TimothyReviewed in the United States on March 24, 2019
5.0 out of 5 stars
super show
Verified purchase
Rather than dig into the plot points and specifics of the show and of each season, I just want to offer a review to state that I think this is a great series and that I am thankful for the well-packaged Blu-Ray releases. The adventures of Oliver Queen and his crew of crime-fighting allies are not to be missed.

Gabby VictoriaReviewed in the United States on January 9, 2021
1.0 out of 5 stars
Broken
Verified purchase
Normally I don’t have issues buying movies here but this was BRAND NEW just out of wrapping and it was completely broken up and the first disc was loose and scratched. I’m very disappointed with this purchase.

ElizabethReviewed in the United States on July 29, 2018
5.0 out of 5 stars
A great bounce-back from season 4!
Verified purchase
Probably the second best season of Arrow ever. After the disaster known as season 4 this was a nice return to what we all love in the CW's iteration of Arrow. If you are looking to buy this product you are probably already that far in the series so there is no reason not to buy this!

kathy atkinsReviewed in the United States on January 2, 2021
4.0 out of 5 stars
Digital download is not for iTunes
Verified purchase
Everything is fine except for the digital download. Usually the digital downloads can be downloaded to ITunes but not in this case. That is the main reason I bought this.
See all reviews
Back to top
Get to Know Us
Make Money with Us
Amazon Payment Products
Let Us Help You
EnglishChoose a language for shopping. United StatesChoose a country/region for shopping.
© 1996-2021, Amazon.com, Inc. or its affiliates