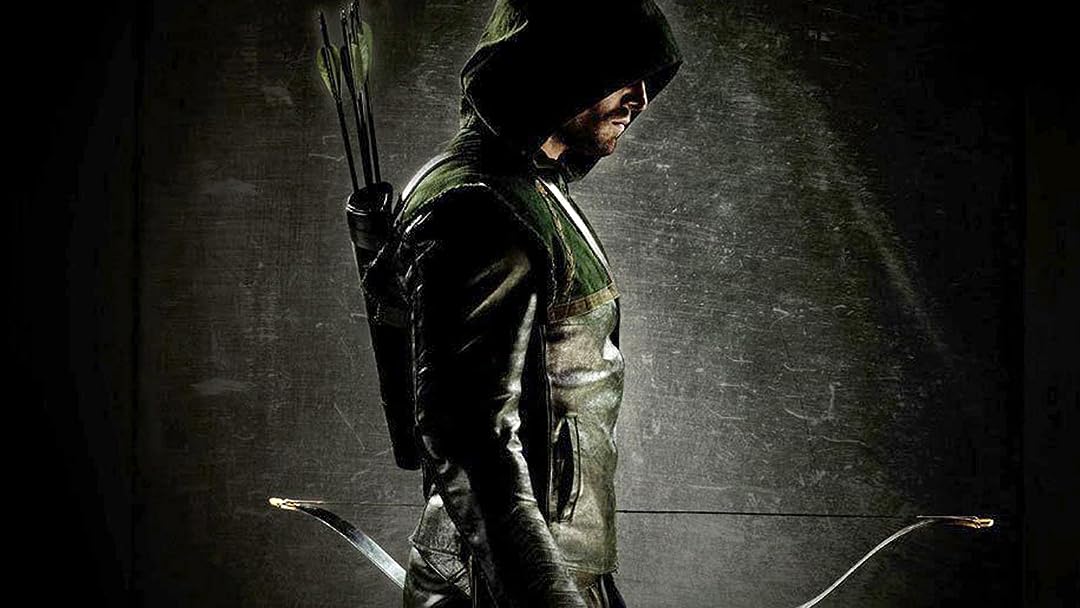 (2,447)
7.52013X-RayTV-14
After being marooned for five years on a remote island, billionaire Oliver Queen (Stephen Amell) returns home with a mysterious agenda and a lethal set of new skills that he uses in a war on crime in this hard-hitting action series. Reinventing the DC Comics character for a modern-day audience, the Arrow is not a superhero … but a hero – every bit as dangerous as the criminals he’s hunting.

M. BristolReviewed in the United States on January 31, 2016
5.0 out of 5 stars
but I love the Arrow
Verified purchase
I am old, but I love the Arrow. At a time of a tragic double loss in my life, when I was depressed, and unable to focus on what I needed to be doing, the only thing that made me happy, lifted me up, and took me away from all that was going on around me, was the Arrow. I ran across this show by accident, had never heard of the Arrow before, but I am so glad I found it. I love Stephen Amell and all the characters. In my opinion the casting is perfect, there is never a dull or boring moment, great story, lots of action, normal people dealing with things in their lives, while fighting against the evil, to make things better. It was hard for me to wait for the next show, so I bought all the shows that are out, and have a pre order in for the next series. I guess you could say I am probably the biggest fan, and I hope it does not change into something else, I hope it does not fail me in the future.
27 people found this helpful

TLH in TallahasseeReviewed in the United States on November 5, 2015
4.0 out of 5 stars
Soap and Arrows
Verified purchase
"Arrow" is a soap opera with a comic-book background, and it was definitely finding its feet this first season. Stephen Amell does a pretty good job of showing Oliver Queen's change from "Ollie the playboy" to "brooding almost-hero". (Later he gets to show more emotional depth, but that's for another review for another season.) David Ramsey and Emily Bett Rickards really strengthen the cast, with Mr. Ramsey bringing a reality and solidity to a situation that's hard not to mock in real life (really? arrow-shooting-vigilante? reeeaaaallllllly?), and Ms. Rickards' energy and honesty are endearing and another flavor of reality (Felicity's facial expressions at Oliver's lies are PRICELESS; when Dig joins her in the eyerolls, you'll have to hit pause while you giggle). Susanna Thompson also brings an honesty to Moira Queen (honesty? Moira Queen? hmmm....) that makes her creepily believable and even likable. Everyone else's acting had a weird kind of clench-jawed-ness to it, although I was sad that A Certain Character was killed off at the end of the season; I think that role and situation had potential.
9 people found this helpful

Page Turner, IIIReviewed in the United States on September 12, 2015
5.0 out of 5 stars
Much More Than I Ever Expected!
Verified purchase
I read some of the posted comments and the majority were really quite positive. I had been looking for an adventure series that I hoped would not get me interested like Lost did and then during season three turn into a pathetic soap opera. So far this series has me staying up late with interest.
The stories are not too far fetched, the Island background is most interesting, and the acting from these fine actors is top notch. I hope I am not letting too much out by saying this, but this series has some of the most exquisite and talented actresses (I know, they want to be called actors.) I have ever seen.
Katie Cassidy is stunning to watch.Willa Holland is beautiful and mischievous, Susanna Thompson's heart-stopping pulchritude is almost enough to make one forget the story lines.
The two actresses I hope stay involved with the show for as long as it lasts are Kelly Hu and Emily Bett Rickards. These two ladies walking into a room would make blind men wish they could see and lame men walk. I also hope we see more of Janina Gavankar.
The male actors are not slouches. They are great actors.
I love the stories and there is enough jeopardy to keep ones attention.Maybe if I periodically write glowing reports of this series the producers will invite me the set one day. I am only half way through season one.

GSXRUSERReviewed in the United States on November 16, 2016
5.0 out of 5 stars
Must Watch! ARROW
Verified purchase
Not a D.C. Comic reader at all!
But this show is different somehow!
First the hero is no hero!just an average person.
Well average spoiled rich kid who never cared about anyone else his entire life!
But shipwrecked on a deserted island made the playboy wake up!
Very well done show that shows him as he came home after 5 years on the island Lian yu. (Purgatory) shows his daily life back home adjusting and shows what really happened on the island and why he must right his fathers wrongs and save his city!
It's fun,smart,entertaining and very enjoyable!
But if a guy in a green outfit and green Hood pops up at night and says
YOU HAVE FAILED THIS CITY!
Run!
Good show for most all ages!

B. HafnerReviewed in the United States on March 22, 2017
5.0 out of 5 stars
Season One = Worth It
Verified purchase
I have been watching this show since it came out, I even remember getting excited when it was announced. With that in mind I will do my best to not be bias. Season One of Arrow is actually addicting, and nowhere near what the show has turned into today. The action is a bit dated already, but it is still entertaining and smooth. The story is actually very intriguing, and has a bit of a variation from the comics, but nevertheless if you keep an open mind, it is great!

Please note that this show, as well as all the other DC Universe shows are on Netflix, I only purchased this; because I couldn't access my Netflix account for a couple months at a time due to poor internet connection in college. With that in mind, the price for Blu-Ray + DVD + HD Digital is amazing. You really can't get much more bang for your buck anywhere else on Amazon.
4 people found this helpful

Number SixReviewed in the United States on January 1, 2014
5.0 out of 5 stars
DC Superheroes Done Right
Verified purchase
As much as I wanted the Smallville series to be better than it was, I didn't even want to view this series when first announced. In spite of Tom Welling's input, Smallville left me feeling unfulfilled for my favorite DC Comics characters. Having said that, I'm glad the show runners for Arrow have learned the lessons well from what came before re: Smallville and have turned out a quality product that I'm glad to be the owner of and am looking forward to the Season 2 Blu-ray discs all the more. This is a well acted and written show which is respectful of the material's origins and takes them forward in exciting directions. The clever use of both DC characters and original characters (to my knowledge anyway - I'm talking about Diggle - a nod to former DC writer Andy Diggle perhaps?) is a good mix. Stephen Amell sells the character and it's clearly his show, but that's not a slight of the other actors involved because they interact really well with one another. I'm glad they've hired really good actors like the former Captain Jack Harkness from the Dr. Who BBC series also known as John Barrowman. They've even hired Alex Kingston (River Song from Dr. Who as well) and they're only just starting. This is geeky fan fun all the way around with a compelling story about the Island and what's going on currently that all ties back to that island. This is a good show and I recommend it to comics fans and adventure fans alike. There's something for everyone with this show, it's too bad they killed off...ah...but that would be telling and even then there's more to say. Bought this at a great Amazon price $16.99 whereas other vendors still had it going at a full bore $39.99. All of that Arrow goodness and a great price. Tanam Shud!
2 people found this helpful

Jade EmporiumReviewed in the United States on May 11, 2014
5.0 out of 5 stars
So glad to have finally bought this Great show!!!
Verified purchase
I've been watching this series since the very beginning and knew it had the potential to be a quality show. For those who have never watched this series before and like comic book heroes, this show should satisfy you. I won't go into detail about the show as I don't want to spoil it for people who have never watched it but the first season has Oliver Queen returning to Starling City after surviving being on an island for 5 years but coming back a different man. He has a lot of anger in the first season and is determined to cross off names on a list that his father had put on a booklet. He is just considered a vigilante by everyone in the first season. There's moments of flashbacks to the time when Oliver was on the island which helps to explain what happened to him while he was there. Unlike Agent of Shield, this show was strong from the beginning and just continued to improve as the season progressed. Arrow has less corny lines than AOS and better cast IMO. The Nielsen ratings has never seemed accurate to me as only a select number of households have the boxes and the ones who do tend to be family households who watch shows on NBC, ABC, CBS, and Fox. People who usually watch shows on CW are single/couples that are into superhero, supernatural type shows. I highly recommend The Arrow as it has already been renewed for a 3rd season!! I like the show so much that I decided to get it on bluray to have in my personal library. I bought the discs instead of instant video because of the data caps imposed by ISP, so I want to limit the amount of streaming and downloading I do. Bluray is better anyway as it is in 1080p as opposed to the 720p instant videos.
One person found this helpful
See all reviews
Back to top
Get to Know Us
Make Money with Us
Amazon Payment Products
Let Us Help You
EnglishChoose a language for shopping. United StatesChoose a country/region for shopping.
© 1996-2022, Amazon.com, Inc. or its affiliates