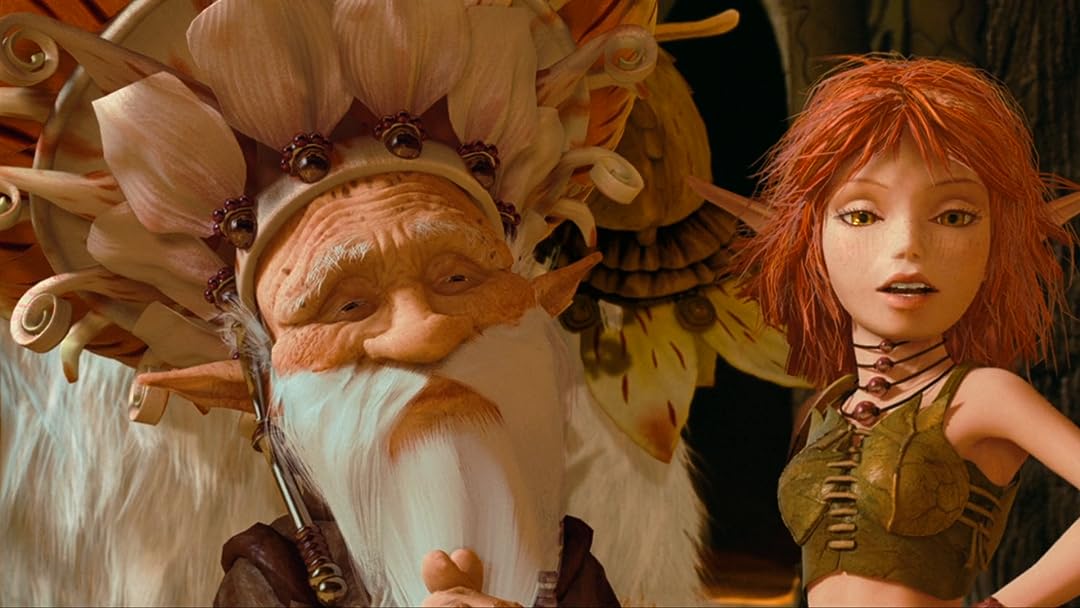 Arthur and the Minimoys

(1,749)
6.01 h 43 min2007X-RayPG
A larger-than-life, family adventure about a boy who, after his grandfather disappears, sets out to save his family home from emerging real estate developers. Arthur learns that he must follow his grandfather's ancient clues to a vast treasure - and unlock the passageway to a spectacular new world filled with mysterious little people, so tiny they are considered invisible, and enlist their help.

Tenna MerchentReviewed in the United States on January 30, 2008
4.0 out of 5 stars
Cool children's fantasy
Verified purchase
Arthur and the invisibles

I'm a sci-fi, fantasy, animation fan, so this movie is right up my alley. My favorite scene was the one where Grandma is telling Arthur about Granddad's travels. The lighting is that magical golden-amber and your imagination runs away as she tells the story of the giants, their brothers the little people and the rubies they gave granddad.

But let me back up, our hero, Arthur is a little boy who lives with his grandmother (Mia Farrow) in the country. His parents call from the city on his birthday because they are still there trying to find work. He's of course sad because they aren't with him. But grandma had someone bake him a cake, (their oven isn't woring) and she has a wind-up toy car as a gift for him.

Granddad disappeared a few years ago, and unfortunately, a bad guy is going to come take the property they live on because they can't pay the bills. This is where Grandma tells Arthur stories of Granddad's travels, and how he made friends with a tribe of very tall people, and another group of very small people. They are sort of two sides of one coin. They call each other brothers. To thank granddad for his help, they give him the rubies, which could be very helpful given their financial problems.

Arthur asks his grandmother where the rubies are and she explains that granddad hid them in the back yard, and looked tirelessly for them, but couldn't find them. Then, he disappeared.

Through a series of clues, (another of my favorite parts) Arthur discovers how to get to the land of the little people, and this is where the adventure begins. He becomes a Minimoy, which to us means he becomes an animated, and somewhat more hip version of himself. He meets the king (Robert DiNero) and his daughter (Madonna).

He finds out that his grandfather has been through their land and went to look for the rubies. A bad guy, with the voice of David Bowie, threatens their land, and has the rubies. Arthur, the princess, and her little brother go off to face the bad guy. On the way, they discover that one of Arthur's inventions is going to be used by the bad guys to hurt the Minimoys.

They find Granddad in prison, where they also end up. They of course get out, save the Minimoys and Arthur and his granddad get home with the rubies to save the day.

There is also hope for a future relationship, because Arthur is able to go visit every 10 moons. And the final scene the princess is looking at him through his window saying "I'll wait for you."

KenReviewed in the United States on December 4, 2012
5.0 out of 5 stars
If you speak French, that is all for the better. With a bit of work, we English-speaking persons can enjoy this Blu-ray too.
Verified purchase
This is a wonderful movie, and it does play in all Blu-ray players. Just know that its first language is French, and you may find yourself digging for the remote to access the menu to choose English vocals instead. When you do, the voices of Freddie Highmore (Charlie and the Chocolate Factory) and Madonna, and the live-action Mia Farrow will be much more pleasant.

Although the sequels can be had in Blu-ray in English, this multi-language version seems to be the only way to obtain the first film in the series, but it is worth the cost and the slight bother. The animations are perfect, and the story is wonderful. There seems to be no problems with the translation looking poorly synced. I suspect it was filmed in English or converted with great effort. The writer/director is Luc Besson, who wrote and directed one of my favorites, The 5th Element, with Bruce Willis and Mila Jovovich.
2 people found this helpful

Bryan LemkeReviewed in the United States on February 14, 2013
2.0 out of 5 stars
So close...and yet so far away (from 5 stars)
Verified purchase
The movie has SO much potential, but falls short in so many ways.

#1 - The movie seems choppy and poorly edited in some places. Reading the other reviews, I understand that several scenes were deleted from the DVD and it makes sense why it's choppy. It still doesn't fix the choppy transitions in some places or unexplained things, but at least we know WHY it doesn't flow smoothly.

#3 - The story is too contrived (even for a kid movie) and poorly written in too many places. The dialogue seems forced and fake too often, and the character transition (the stubborn independent heroine suddenly becoming soft and tender for no explicable reason?) is just not believable at all.

#4 - It seems like it's trying so hard to be a kid's movie but doesn't understand that the elements to make a good movie for grown-ups still need to be there for kids (believable characters, a consistent plot, no unnecessary scenes that make you scratch your head and ask "What was the point of that?").

Bottom line: The movie fell short of being truly wonderful. It was cute enough and could easily have been a top-ten movie for us with a few minor tweaks. It started out with a great idea and is right on the edge of going from mediocre to masterful...but never does. Add to that a 5-year-old walking around the house saying "Oh my G**!" over and over and your 3-year old taking his pants off to be like the bartender and you get a frustrating 'kids' movie to have purchased with my own kids in mind. Very frustrating for a parent to see your little ones mocking all the stuff you hated most in the movie.

Like I said, so close and yet so far away...
6 people found this helpful

rusty_trigger2Reviewed in the United States on May 15, 2021
5.0 out of 5 stars
Great movie, and I would recommend it to anyone interested.
Verified purchase
This product is as described, and arrived on time. My boy loved this movie, and I didn't mind it neither. In my opinion, it is better than part 2 and 3, but 2 and 3 are worth getting so you can watch the whole show of course lol.

ThisbytezReviewed in the United States on August 20, 2016
5.0 out of 5 stars
Love this movie!
Verified purchase
I absolutely love this movie! It has a great cast,great storyline and is funny. I would definitely watch again.

Plot: Arthur (Freddie Highmore) is a ten year old boy who sets out on adventure to save his grandfather's house from being demolished, so he goes looking for rubies that his grandfather hid in the land of the Minimoys which are tiny people living in Arthur's Grandfather's garden.

Parents guide: A couple of fight scenes, And little ones might find the giant bugs and bad guys to be slightly frightening.

CheliReviewed in the United States on January 3, 2013
5.0 out of 5 stars
Fantastic and thrilling to watch
Verified purchase
Great,colorful and thrilling movie. Had copy before but infant got ahold of, enough said. Looked for long time to replace and finally found here. Movie Mars surprised me with getting it here before Christmas when it was not shown to arrive until much later. Great job guys! The dvd was well protected for shipment and arrived in Mint, Mint condition. I have them on my list to purchase from again because they show excellence in what they provide, and their pricing is great especially when you are having to rebuild/replace your collections.Plus they seem to have hard to find or out of circulation products. I DO like this seller!!!

paz_moradaReviewed in the United States on July 17, 2014
4.0 out of 5 stars
Very Enjoyable
Verified purchase
Very enjoyable, watched with a batch of children who loved it. The stars providing the voices were surprising recognizable, considering I had never heard of the movie when it came out. The animated characters had a Dark Crystal feel to them that I appreciated, which was lost on the kids but they adored them. Definitely recommend this movie, but can't say the same for the two movies that followed. They had none of the joy and spontaneity of the first movie, and replacing David Bowie's voice for the villain with the unintelligible mutterings of Lou Reed was a major disappointment.
See all reviews
Back to top
Get to Know Us
Make Money with Us
Amazon Payment Products
Let Us Help You
EnglishChoose a language for shopping. United StatesChoose a country/region for shopping.
© 1996-2022, Amazon.com, Inc. or its affiliates