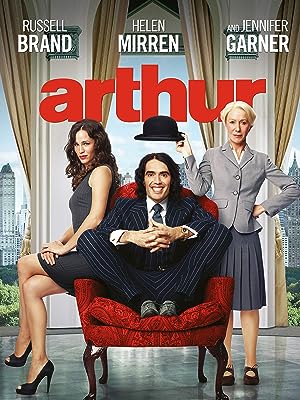 (642)5.71 h 49 min2011X-RayPG-13
Russell Brand reinvents the role of loveable billionaire Arthur Bach, an irresponsible charmer who has always relied on his limitless fortune to get by.

NatalieKCMOReviewed in the United States on March 10, 2016
5.0 out of 5 stars
Mindless fun for a night! If you like Russell Brand, you'll like this movie!
Verified purchase
Even though this is a remake The plot remains essentially the same. Arthur is a cheery wastrel whose wealthy family (here represented by an icy Geraldine James) wishes him to marry a suitable young lady (the effortlessly warm Jennifer Garner, seriously miscast as a gold-digging, status-seeking, nymphomaniac bitch — a far cry from the boring bride-to-be in the 1981 original).
Arthur goes along with this to keep his fortune, but then meets the love of his life — in the old movie, a tough-talking waitress played by Liza Minnelli, but here a whimsical tour-guide and wannabe children’s author, played ineffectually by Greta Gerwig.
I really love this movie, its mindless fun to watch with friends, not really suitable for children though, so don't plan on this one being a family movie.

Anonymous Reviewed in the United States on September 20, 2019
5.0 out of 5 stars
This remake is GREAT
Verified purchase
I loved this movie when Dudly Moore did the first one bqck in the 80's. But Russell Brand totally nailed it. He and Helen Merrin along with Greta make this movie even better than the first one. I do love both versions but I like the one with Russell a bit better. I like storyline better that Niomi writers a children's book and is a touir guide.

Cara Devona BrownReviewed in the United States on November 10, 2019
1.0 out of 5 stars
Very disappointed
Verified purchase
I am very disappointed. I just bought this movie and I just now unwrapped it to watch the movie and it plays the commercials for other upcoming movies just fine. But, it won’t show the main movie. It appears scratched up after the commercials than it cuts itself off the DVD player.
I regret wasting my money on this item.😡
Cara Brown, Dissatisfied customer.

DrHReviewed in the United States on June 19, 2020
5.0 out of 5 stars
It's Author... Updated fresh & hilarious
Verified purchase
Loved the original, Russell Brant, Jennifer Garner and the rest of the cast stick to the script in the most hilarious way.
One person found this helpful

Brad BakerReviewed in the United States on July 20, 2011
3.0 out of 5 stars
Arthur: I'm going to take a bath. Hobson: I'll alert the media.
Verified purchase
The new remake of 1981's "Arthur" has no Dudley Moore, but it does have Russell Brand running down Park Avenue in his underpants. "In my scene at St. Bartholomew's Church, Arthur strips down in protest and runs out onto 42nd. Street", says Brand. "New Yorkers now have photos of me in my underwear, which will soon become a Hollywood artifact, just like James Dean's leather jacket". No wall-flower, Brand is brash and loud-mouthed...almost perfect as the child-minded millionaire Arthur Bach. "Arthur" opens with the police chasing Arthur and Bitterman(Arthur's chauffeur) in the Batmobile through Wall Street in Manhattan. Arthur's had a few too many, but he's not driving. Arthur is a 30-something who collects random women, movie cars, and cases of vodka. Arthur's powerful, scheming mother has determined that he must quit drinking, and marry Susan; or lose his enormous wealth. Eventually, Arthur enters re-hab at AA, and by now, he's sure he's in love with a spicy young girl from Queens; not Susan. Arthur barges-in on her grammar-school class. Startled, one youngster stands up and challenges Arthur: "Are you a boy or a girl?". Enough old-fashioned madcap frenzy continues to sell the movie. The cast includes Helen Mirren(in John Gielgud's role of Hobson; there is valet, here his nanny), indie darling Greta Gerwig as the doll from Queens, and Jennifer Garner as Susan Johnson, his arranged wife. And there's Luis Guzman as Bitterman, and Nick Nolte as gruff father-in-law Bert Johnson. Nolte is terrific, and has about ten lines in one scene. The HD theatrical release and the Blue-Ray disc nicely highlight Central Park, an empty Grand Central Station reserved for lunch, and a grand series of helicoptor swoops over the roof of the Pierre Hotel, where Arthur has his penthouse. The DVD features a selection of Deleted Scenes, and that's it. On Blue-ray, you get a Gag Reel, Deleted Scenes, and "Arthur Unsupervised", where Brand and director Jason Winer expose more fun footage, photos, and ad-libs. At 36 1/2 minutes into the movie, Arthur sit in his car checking his cell phone. A name comes up for just a few seconds on his phone book. It is Katy Perry.
7 people found this helpful

ShannonReviewed in the United States on August 25, 2018
5.0 out of 5 stars
I love Russell!!
Verified purchase
This movie is down right adorable. One can't help but fall in love with Arthur. He's cute, quirky and Russell could not have been a better choice for this movie. One of my favorite go to movies
One person found this helpful

Serious BlackReviewed in the United States on July 20, 2014
5.0 out of 5 stars
Warrants repeat viewing in my book
Verified purchase
I really enjoyed this movie. Never did see the original, so I had no expectations. But I do think it's rather silly to expect a movie remake to be a carbon copy of the original and not just enjoy what transpires as something of its own standing. They take the basic premiss but make something new of it, happens all the time folks and that's okay. I thought Russell Brand was hilarious and believable as this Arthur. Well played by him, quite well played. Both Helen Mirren and Greta Gerwig were brilliant as well.
2 people found this helpful
See all reviews
Back to top
Get to Know Us
Make Money with Us
Amazon Payment Products
Let Us Help You
EnglishChoose a language for shopping. United StatesChoose a country/region for shopping.
© 1996-2021, Amazon.com, Inc. or its affiliates