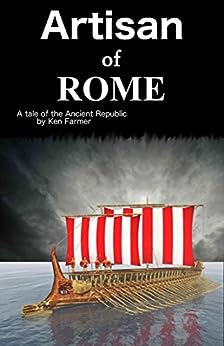 Artisan of Rome: A Tale of the Ancient Republic Kindle Edition

4.2 out of 5 stars
4.2 out of 5
84 global ratings
How are ratings calculated?
To calculate the overall star rating and percentage breakdown by star, we don’t use a simple average. Instead, our system considers things like how recent a review is and if the reviewer bought the item on Amazon. It also analyzes reviews to verify trustworthiness.

Doug Huestis
2.0 out of 5 stars Another good story spoiled by lack of an editor
Reviewed in the United States on October 1, 2017
Verified Purchase
I reviewed the mistitled Founder of Rome book by Mr. Farmer and found it an excellent story, unfortunately marred by incompetent or no editing. The same applies to Artisan of Rome. The author’s custom is to write about an indigent boy with innate abilities who works hard, minds his manners, and eventually rises to the top. Horatio Alger, as pointed out by another reviewer. Nothing wrong with that. This boy starts out as an apprentice and ends up as an expert shipwright in first the Carthaginian then the nascent Roman navy. A lot of things happen to him along the way, some good, some bad, always interesting. But he never makes a misstep along the way, never says the wrong thing to a superior, never has an unworthy thought. He’s too perfect to be human. That said, the story is a good one and holds the reader’s attention. The author has done a lot of research into the ancient history and the ships of the time and deserves credit for that. I’d give the story four stars.

Once again, the author has spoiled his good story by careless writing and failure to have it edited. The very first word in the text is wrong: the author’s introductory remarks are a Foreword, not a forward. In that foreword, the author laments not knowing the Punic terms for parts of a ship. Thank goodness. The reader is spared that at least. Throwing Punic, Latin and Greek words into the text serves no useful purpose and irritates the reader, especially when the spelling changes from page to page. Calling a woman a femina, a girl a puella, and a captain a capitaneus (variously spelled and a word that probably did not exist at the time) is ridiculous when you’re writing in English. And the dialogue is in some sort of contrived, pseudo-archaic English. The people in this story would have been speaking colloquial Latin (not Latini) or Greek of their time, so their speech can be rendered as ordinary colloquial English of our time. Invented words like noticement, truthsome, goodsome, the Latin words sinister and dexter for left and right, are unnecessary and do nothing to advance the story. The same with incorrect use of Latin, especially plurals: the plural of negotiator is negotiatores, that of pilum (spear) is pila (pili means hairs), that of as (the coin) is asses. Pater has no accent over the e (Latin had no accents on any of the letters). Cocua is a female cook, cocuus the male. To issue body water is to sweat, for goodness sakes. The truth is that virtually every page has at least one or more obvious errors in the English or Latin, or incomprehensible sentence structure, and I can’t speak for the Greek or Punic words. Please, oh please, get an editor.
Read more
10 people found this helpful
Helpful
Report abuse

NoseInBook
5.0 out of 5 stars I enjoyed Artisan of Rome as I have enjoyed all of ...
Reviewed in the United States on September 14, 2017
Verified Purchase
I enjoyed Artisan of Rome as I have enjoyed all of Kenneth Farmer's excellent historical novels set in ancient Rome. He is unique among authors of this genre in that his heroes are decent people who do well in the long run, thanks to hard work and good planning. It is refreshing not to have to suffer through endless descriptions of horrific torture and drawn-out bloody battles as so many other authors writing in this category revel in. His work is well-researched and authentic, and leaves the reader feeling more familiar with the time period and the people who lived in it. At the same time, the novels are compelling and keep your attention throughout.
Read more
2 people found this helpful
Helpful
Report abuse

Joe Corso
4.0 out of 5 stars Excellent Book About Ancient Rome
Reviewed in the United States on February 26, 2019
Verified Purchase
In Artisan of Rome, Ken Farmer wrote an exciting well written story. My only concern was the book was not a stand alone book, it's a part of a continuing series. But after saying that, If you enjoy stories of ancient Rome, then get this book, you won't be disappointed. Ken Farmer's books on the Roman Legions and Ancient Rome are among the best I've read and this book is no exception. Great job Ken Farmer.

Kindle Customer. Lawrence Dumas
1.0 out of 5 stars A very hard read
Reviewed in the United States on November 16, 2017
Verified Purchase
I'm sure Mr. Farmer wanted this book to be as accurate as possible. However, it is an extremely difficult book to read written the way the people of ancient Rome may have actually spoken. To me, practically all the sentences needed to be
read slowly in order for me to understand what they were really saying. I don't believe I'm stupid, but I found th wording to be so confusing I never finished the book. Thus the one star.
Read more
3 people found this helpful
Helpful
Report abuse

Thinker
4.0 out of 5 stars Well paced
Reviewed in the United States on September 23, 2017
Verified Purchase
An interesting adventure written about a time seldom explored. The author allows the reader to participate in the story by making it accessible and clear, and it is well paced and engaging. One star off for the far too frequent use of some kind of contrived Elizabethan-esqe lingo that is often absurd and distracting - as set dressing a little of that goes a very long way.

On the whole I would recommend this book and will read more of this author.
Read more
Helpful
Report abuse

J Sams
3.0 out of 5 stars Good story but too many editing errors.
Reviewed in the United States on January 25, 2020
Verified Purchase
Nothing works quite as well as actually proof reading the material. Even a good story is like rollerskating over marbles if there are frequent disruptions of editing errors.
Read more
Helpful
Report abuse

Amazon CustomerTechwrtr
3.0 out of 5 stars Might have gotten 4 stars IF
Reviewed in the United States on April 24, 2020
Verified Purchase
The book has good historical content, an excellent plot, and bizarre, distracting word choices in the narrative. It uses "goodsome" to mean good, acceptable, or delicious, "viands" instead of "food," and "scarfing" instead of cutting, sawing, or planting. You might expect odd words in dialog to provide local color, but in the narration it is annoying.
Read more
Helpful
Report abuse

Dan
5.0 out of 5 stars Grea read
Reviewed in the United States on May 13, 2018
Verified Purchase
Very interesting and easy read with enough information about the era it is also nice beeing about earlier rome than we mostly read about
Read more
Helpful
Report abuse
See all reviews

Mr. Norman Wilson
5.0 out of 5 stars Another first class novel from Ken Farmer!
Reviewed in the United Kingdom on September 13, 2021
Verified Purchase
Ken Farmer has once again excelled in writing his novels set in the time of ancient Rome. This one has taken a little while to come out, but it was worth waiting for. I had in my mind decided which of his novels was the best, and there are a few that could be in the running. Then, along comes this one which takes the wind out of a lot of thoughts about the other ones.
The one let down, if indeed it was a let down, was that in the earlier book, 'Scrivener of Rome' The scrivener is Junius who later become Lucius Junius and he was a good friend of Lucius Camillus. Now as Lucius Camillus appears in this latest book it seemed a pity that they couldn't have rekindled their friendship here as well. That though is such a minor point that it could be excused.
As usual, do allow plenty of time for reading this book because, like most of Ken Farmers books, this one does have some length to it. In fact, they become so good and interesting that you can start wonder why they had to end anyway.
Well done to ken Farmer again
Read more
Report abuse

john r
5.0 out of 5 stars excellent
Reviewed in the United Kingdom on February 22, 2018
Verified Purchase
Absolutely love Ken Farmers books. Have now read all of them. I enjoy the use of what I would describe "Olde Englishe" which although not to everybodies taste, For me, it makes the story more believable than when written in Oxford prose.
Read more
Report abuse

Jeff
5.0 out of 5 stars Interesting take on Ancient Rome
Reviewed in the United Kingdom on July 27, 2021
Verified Purchase
Another morality tale, work hard, get lucky and you too could get to the top.
All said and done it is a good read. that's why I've read the whole series.
Read more
Report abuse
See all reviews