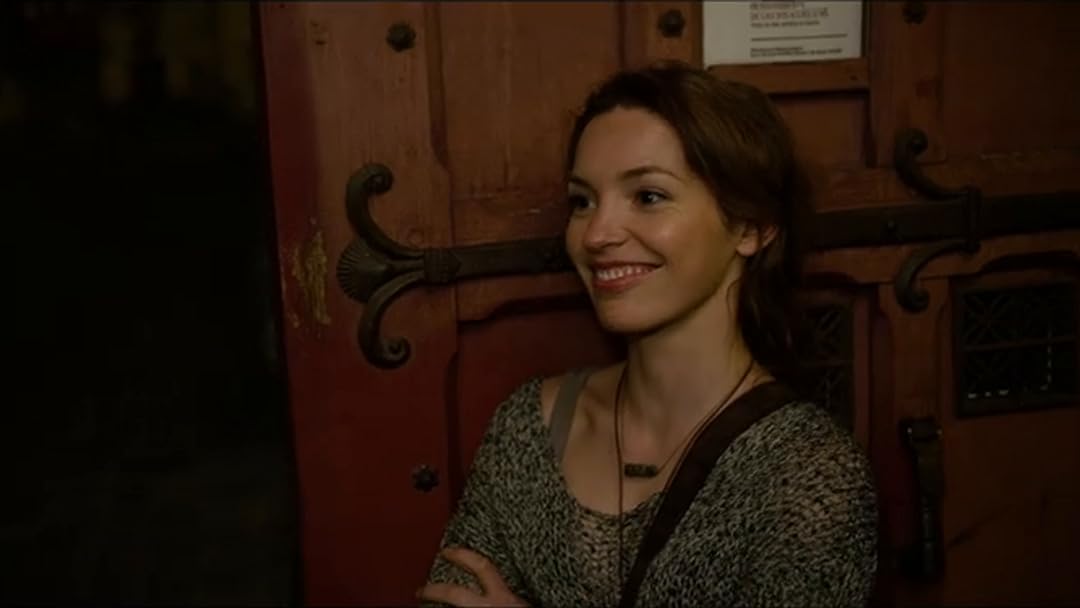 As Above, So Below

(2,963)
6.21 h 33 min2014R
When a team of explorers ventures into the miles of twisting catacombs beneath the streets of Paris, they uncover the dark secret that lies within this city of the dead.

M. NelsonReviewed in the United States on April 26, 2018
5.0 out of 5 stars
Very Good
Verified purchase
A group of wanna-be Indiana Joneses go spelunking in the forbidden parts of the Paris Catacombs and get trapped inside. As they're forced to go deeper and deeper, things start getting weird and creepy.

I've always been forgiving if a horror film has a story I enjoy, and I really did enjoy this. No, it's not incredibly scary. There are a few moments of good suspense and one of two jump-scares that work, but I didn't find myself on the edge of my seat. The premise is simple, even if it's not particularly unique. If you watch the trailer, you can probably guess where the story goes. Hell, even if you don't watch it, you can probably predict where it's going to go within 30 minutes.

But, I admire how the story plays out. The have a concept for their story and they unapologetically go full-bore with it. They use the atmosphere of the setting to great advantage and they obviously have a lot of fun playing with it. They're willing to push the story to the brim of believability and then say, "Screw it, let's go over-the-top," in the final 20 minutes. And, as far as I'm concerned, the vast majority of it works. Not only does it work, it works with style. They treat their audience with respect by expecting them to add-up the clues as the characters are adding them up. Not once does a character explicitly say what's going on, they just allow the situation to be obvious in due time.

All the technical requirements are met. The acting it strong, it looks and sounds good -- well, as good as a found-footage film should look. As far as the found-footage-ness goes, you don't need to worry about vomit-inducing shakey-cam, which is always a bonus. The set design is strong and atmospheric, probably because they used the actual catacombs.

While trying to think of cons for the film, right now I only come back to one scene involving a burning car. I won't go into details, but it uses some CG that doesn't quite work, but which I'm willing to forgive since it marks the beginning of the film really going over-the-top.

The final few minutes are brilliant. I loved that ending.

J. CarpenterReviewed in the United States on March 11, 2021
1.0 out of 5 stars
So below, really so below one-star
Verified purchase
Take "The Blair Witch Project", place it in the catacombs beneath Paris, make the incompetent protagonist a multi-lingual French woman with two doctorates instead of an aspiring film major, and you have exactly what you thought a film like this would be: a blatant, incoherent knockoff that is an utter mess.

Not only does the film ripoff the aforementioned, groundbreaking faux-documentary "Blair Witch Project" but it shamelessly trots out ideas from "Raiders of the Lost ArK", "Paranormal Activity", and Poltergeist.

You can believe the incomprehensible two, three, four, and five-star reviews and stream this trainwreck for $3.99 or go to Youtube and catch something far more unsettling like "Carnival of Souls" for free.

It shouldn't be a tough choice.
5 people found this helpful

GillianReviewed in the United States on January 29, 2021
5.0 out of 5 stars
Very scary very cool!
Verified purchase
me and my older sister watch this not too long ago I got it for her for Christmas because we did love the movie so much that we wanted to buy it this movie is freaking terrifying it is actually a very good movie despite how we thought it was going to be we thought it was going to be a low budget and very boring but instead it diverted our expectations and gave us something very scary and very good I recommend giving this a wash before buying it though you may not like it as much as we do 100% watch the movie before you buy it watch it for free watch it on Netflix that's where we did have fun this movie is very scary so be warned if you like it then go ahead and buy this it comes in great condition by the way nothing was wrong with the disc and the box was fully intact
One person found this helpful

SjhReviewed in the United States on June 13, 2019
1.0 out of 5 stars
God please no
Verified purchase
Don't believe the hype!!! Ridiculous , nonsensical , movie, should re imburse everyone who paid money to watch it. How do you spell "ripped off"? What can be loosely be called a plot borders on gibberish, something about the door to hell. Well, watching this piece of crap was Hell! Complete with a ringing phone(?), A car, and someone s father " hanging around ". Please please , take the money and watch creep, and creep 2, and "the Den" , all fabulous ! They can take this movie and shove it....
Oosely
4 people found this helpful

Abraham the vampire apprenticeReviewed in the United States on November 12, 2021
3.0 out of 5 stars
A movie that makes me think
Verified purchase
Its about a girl trying to pick up the pieces her dad was working on. They go underground in tombs in Paris looking for something very special and find more then what they want. Movie is sort of of like tomb raider but with horror!

Spoiler alert they go deep underground and find Hell or a level of Hell. Hell is suppose to be Fire and brimstone so it could just be a level of Hell .The Hell they portray in the movie is a very cold and nightmarish hell It's a thought provoking movie especially those who lost loved ones or is familiar with the place called the Underworld which is talked about in Egypt Mythology!

John SullivanReviewed in the United States on June 15, 2017
5.0 out of 5 stars
Basically Tomb Raider
Verified purchase
This movie should be classified as an adventure story with horror elements; the protagonist reminded me of Lara Croft and she certainly acted like it. People are losing their cool in the catacombs and she's smashing monsters in the face and solving ancient puzzles. The plot actually felt original for a horror film and the movie revolved around that rather devolving into a chaotic gore fest coupled with numerous terrible life decisions. It's a solid movie, definitely not your typical horror film.
11 people found this helpful

DraculaReviewed in the United States on October 19, 2021
3.0 out of 5 stars
Ehhh... okay at first, then just annoying
Verified purchase
The acting was good, and the story was okay at first. Its quick paced so easy to get into it. But then half way through they nail you with incredibly shaky camera and it gives you a migraine. I hate when movies use ultra shakey camera to hide the lack of effects and effort put into a movie. This movie does that half way through and it just wrecks the experience. The story falls apart too. Meh.

G. RidgewayReviewed in the United States on January 19, 2015
4.0 out of 5 stars
If you have knowledge in the Western Esoteric Tradition, you may really enjoy this movie!
Verified purchase
Ok, so this certainly is a movie which isn't perfect, and not everyone is going to like this, there are some issues with it. Such as the story has some minor holes, and I felt the ending was really weak! But I have been a student of Western Esotericism for years, and actually seeing someone take the esoteric idea of the philosophers stone, and have a lot of fun with symbolism and legend from Western Esotericism was a lot of fun for me. Even somewhat nostalgic. If you don't have this background, be it as a student or just general knowledge, then I would honestly give this movie 2.5 stars. Its an interesting movie, and does have some pretty tense and scary moments.
2 people found this helpful
See all reviews
Back to top
Get to Know Us
Make Money with Us
Amazon Payment Products
Let Us Help You
EnglishChoose a language for shopping. United StatesChoose a country/region for shopping.
© 1996-2021, Amazon.com, Inc. or its affiliates