You've subscribed to Twisted Tale, A! We will preorder your items within 24 hours of when they become available. When new books are released, we'll charge your default payment method for the lowest price available during the pre-order period.
Update your device or payment method, cancel individual pre-orders or your subscription at
Your Memberships & Subscriptions
There was an error. We were unable to process your subscription due to an error. Please refresh and try again. 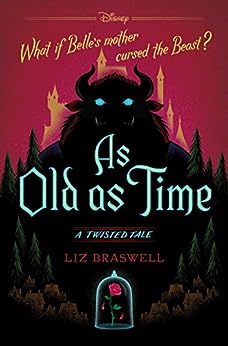 Elizabeth J. Braswell is an English-born American writer of young adult fiction. She is best known for The Nine Lives of Chloe King, a series that was adapted as a 2011 television show of the same name.

James Patrick Cronin began his audiobook career at twelve years of age opposite Christopher Lloyd in The Pagemaster. A classically trained stage actor and philosophy student, he has spent his years since college performing as an actor and a comedian on stages all over the world. He has performed everything from the classics to his own material in Ireland, Scotland, Serbia, and Jerusalem, as well as all across the United States. His final year as a graduate student in Louisville, he won just enough money at the Kentucky Derby to pay for his day at the Kentucky Derby.

--This text refers to the mp3_cd edition.

4.7 out of 5 stars
4.7 out of 5
3,214 global ratings
How are ratings calculated?
To calculate the overall star rating and percentage breakdown by star, we don’t use a simple average. Instead, our system considers things like how recent a review is and if the reviewer bought the item on Amazon. It also analyzes reviews to verify trustworthiness.

Veronica, just an average reader, you know?
1.0 out of 5 stars Took all the magic out of the story (literally)
Reviewed in the United States on June 5, 2018
Verified Purchase
What a disappointment this book was. I'm the biggest fan of the original Disney film, and although this book did have its upsides, it still sucked big time, right up to the incomplete, unsatisfying (non-) ending. The premise of the book was very interesting, but it was so badly handled that it made me regret the time I wasted reading it.

My favorite part of "Beauty and the Beast" was, of course, the relationship between Belle and the Beast. Here, their relationship is downplayed in favor of the social/moral issues related to the persecution of "Les Charmantes" and a whole long backstory about Maurice and Belle's mother that I frankly didn't care that much about. If I wanted to read about the evils of discrimination and persecution of innocents, I would read a historical or contemporary novel, not a book based on a Disney fairy tale.

Some parts of the story didn’t even make sense. For example, the magical rose turned into dust when Belle touched it, messing up with the curse. Why??? There was nothing in the spell the enchantress put on the prince (in either this book or the original movie) that said that the magic rose couldn't be touched by anybody, much less that it would turn to dust or complete the curse. The only statement was that the spell had to be broken before the last petal fell, which a completely different thing. In fact, the rose was from the enchantress’ own garden, so chances are Belle had touched it before, same as the rest of the flowers in her house.

Another issue I had was Belle finding out about the Beast’s curse from the beginning, completely changing the moral of the original story, which was that she could love him without knowing he actually was a prince in disguise.

I also found a little strange that the villain of the story didn’t even think of using the “les charmantes” magic for himself, which seems out of character for somebody as evil as him. It would have given the villian an even stronger motivation for his "experiments". Speaking of the villain, I easily found out who he was almost from the beginning of the story, so the "great revelation" of his real identity fell completely flat.

2 good things about this book: It was only 99 cents, and it made me want to re-watch the original Beauty and the Beast a dozen times more to forget this version exists.

Lady Lorien
4.0 out of 5 stars An interesting and refreshing retelling
Reviewed in the United States on March 6, 2017
Verified Purchase
It took me a while to get into this book but in the end I really enjoyed it. There were many new facets to the story and outright differences from the Disney movie (all of the books in the Twisted Tales series are retellings of the Disney movies) as well as filling in obvious gaps/plot holes. I really enjoyed the subtle nods to the movie as well as the empowering of Belle. She was a strong character in the movie but in this book she has even more agency and thereby is even more awesome.

This story gets really dark and upsetting at the end. It's not quite Stephen King but you may want to be mindful. I suppose it's not much of a spoiler to say that the asylum only hinted at in the movie is more prominent and it is exactly what real asylums were like in the past. If descriptions of what was done to patients would disturb you or your child, then you may want to skip parts at the end.

Speaking of the ending, it was lovely. A different sort of happily ever after but one I wholeheartedly support. I kind of wish this was the story for the new live action remake.
Read more
39 people found this helpful
Helpful
Report abuse

Traveller Blue
5.0 out of 5 stars Excellent retelling of Beauty and the Beast
Reviewed in the United States on March 27, 2020
Verified Purchase
This is the best retelling of Beauty and the Beast that I have ever read! I loved getting to know the characters that I thought I knew. It was interesting about Belle's mom being the one to curse the Prince and everyone in the castle. I loved the world that Liz Braswell created and the rules of magic. I was spellbound to read until my eyes closed. I couldn't wait to see how it ended and yet sad that it's over. I want to keep reading about these characters and this world. I have so many questions that I want answered but won't ask here because I don't want to spoil this incredible story!
Do the right thing and one click this book right now! You won't be sorry that you did unless you were hoping to sleep.
Read more
8 people found this helpful
Helpful
Report abuse

Christina M
3.0 out of 5 stars Interesting, but the ending was not great
Reviewed in the United States on September 18, 2019
Verified Purchase
I’m a fan of Beauty and the Beast so this different take on the story with Belle and her parents was interesting. I enjoyed it until the twist on the ending(and it was terrible). You have to end the story line like the original at least for the entire book to flow. I understand wanting to have an original take, but the beginning had the same lines as the movie. Why change the most important part of the story(which is the ending)? The background story was fine, but it should end the way it’s written originally in my opinion. I’d give the first 2 parts 3-4 stars and the ending 2. So I’ll average it to 3/5 stars overall.
Read more
9 people found this helpful
Helpful
Report abuse

L. JohnsonTop Contributor: Pets
5.0 out of 5 stars Beautifully done
Reviewed in the United States on August 7, 2018
Verified Purchase
This is honestly one of my favorite retellings of the Beauty and the Beast mythos. It has a wonderfully detailed backstory, character development, and feels natural when it takes its ‘twist’.

Beloved characters are seen in new situations to give them more depth. As the plot grows, each page you turn will be exiting and filled with wonderment.

Highway recommend this book and this author and her series!
Read more
9 people found this helpful
Helpful
Report abuse
See all reviews

StormyCrayon
4.0 out of 5 stars Brilliantly twisted!
Reviewed in the United Kingdom on September 12, 2018
Verified Purchase
This Disney twisted tales story was by far the best of all the ones i have read either by Liz Braswell or Serena Valentino. It stayed true to the twisted tale and delivered a not so happy ending, which usually would make me sad or enraged but this outcome made me happy! I was completely absorbed in the story and i loved the little details. I can't say anything else as it will spoil it for anyone else wanting to read this wonderful story.

I do have to give it four stars though as the book seems to have ink/dirt stains throughout which is a bit disappointing.
Read more
One person found this helpful
Report abuse

Kindle Customer
4.0 out of 5 stars Wow
Reviewed in the United Kingdom on October 25, 2020
Verified Purchase
Okay. Not what I was expecting at all! At first I was a tad bored. Belles side we had all heard before. But the story of Rosalind and Maurice kept me intrigued till the West wing and that huge twist! Suddenly it was a whole new story, unheard of before and the ending was just WOW. Makes me wish I knew how it all turned out. I'll be choosing another shortly. I have to say I immensely enjoyed this 😁
Read more
Report abuse

Tom C
5.0 out of 5 stars Tale as new as time?
Reviewed in the United Kingdom on May 26, 2020
Verified Purchase
Whenever you watch a Disney you left with the what ifs, this book series redefines that a gives you an insight to what could have happened if one little thing changed.
Read more
Report abuse

Voni
5.0 out of 5 stars Brilliant for all ages
Reviewed in the United Kingdom on June 18, 2019
Verified Purchase
I'm not the target audience for this book (I'm in my 30's) but I thoroughly enjoyed it. It's a surprisingly dark take on the Beauty and the Beast story, so be ready for that if you're reading this with your kids. The characters from the movie are well fleshed out, especially Belle, who really does become a true heroine here. I can't recommend this enough, and now I'm going to read all the other books in the series!
Read more
Report abuse

Mrs. T
4.0 out of 5 stars Good read
Reviewed in the United Kingdom on June 17, 2019
Verified Purchase
book arrived on time, new and was in very good condition. I had fun reading the book since it's a new take on the classic fairy tale. It was geared more into teen audiences but it wouldn't hurt for grown ups to give it a go as well. Go on and give it a try ;)
Read more
Report abuse
See all reviews