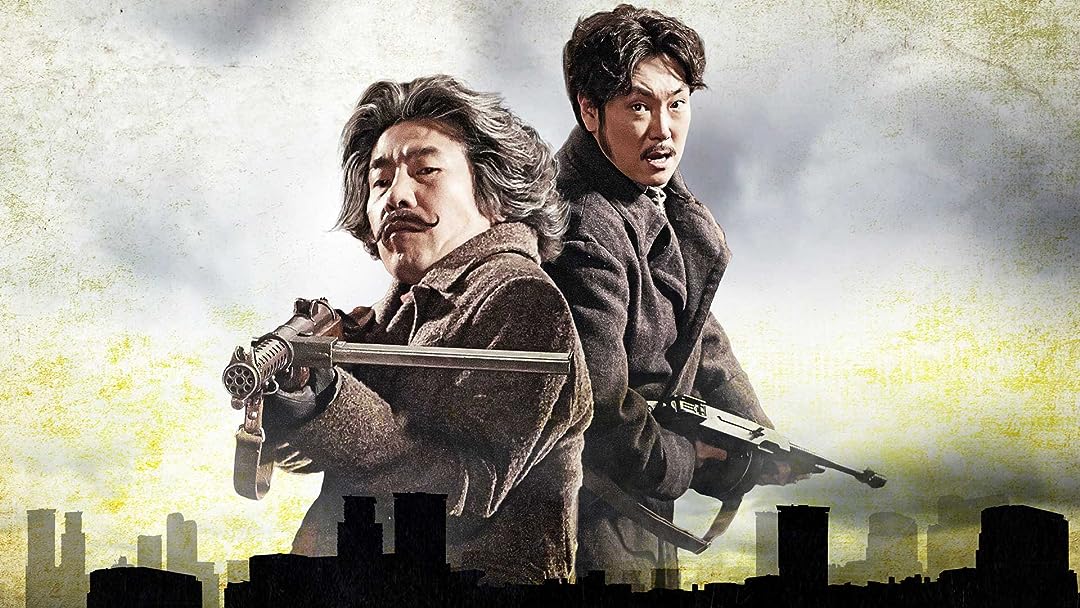 (190)
7.32 h 20 min2015NR
While Korea is occupied by the Japanese Army in 1933, the resistance plans to kill the Japanese Commander. But their plan is threatened by a traitor within their group and also the enemies' forces are hunting them down.

Included with Hi-YAH! on Amazon for $2.99/month after trial

Watch with Hi-YAH!
Start your 7-day free trial
Add to
Watchlist
By ordering or viewing, you agree to our Terms. Sold by Amazon.com Services LLC.
Write review

Rory WhiteReviewed in the United States on October 23, 2020
5.0 out of 5 stars
Excellent. Korean cinematography is amazing. Also makes me respect their people yet more.
Verified purchase
Fantastic camera work, set design, aesthetics, emotions, and
explosive action. HINT: If you do not know Korean (like myself)
nor are super familiar with their history particularly in their struggle
to break from Japanese Occupation, give yourself time to watch parts over
and over, and read up a bit even. I had to do this a bit during the film, but it
simply made the film yet more epic, and that is a good word for it: Epic.

I had seen Ji-Hyun Jun (also called Gianna) in "Blood: the Last Vampire" which
she did as a very young actress, and she had an enigmatic presence elevating the
film "above" the genre (i put "above" in quotes as i'm not really trying to put
a hierarchy of value on types of motion pictures). It was great seeing her as a far
more mature actress handling a complex role.

If anyone has watched the amazing Series, "Mr. Sunshine", this motion picture, "Assassination",
gives a different handling, and in movie, not series, form of the types of tensions and
dramas in this period of Korean life, well Mr. Sunshine takes place 45 years before, so it's
a step toward the stage of the ultimate liberation of Korea and Korean Independence.

Anyway, it's a beautiful, action packed (and well done action and fighting scenes again "elevating"
them above simple violence for violence sake and giving them a bit of the lofty handlings of
fighting within a greater gestalt for example as in, "Lawrence of Arabia", although "Assassination"
is a far more finite, less expansive or "Major"motion picture, maybe more "intimate" to use
an imperfect word.

Great film. Great acting by Ji-Hyun Jun in watching her now maturing into different roles,
and quite well done. I wish I could speak and understand Korean, but the subtitles worked.

Todd M.Reviewed in the United States on November 6, 2021
4.0 out of 5 stars
Five stars for the sets… but not the movie.
Verified purchase
Though it had a chance to be much better it suffered from being too long and a story that was just unbelievable. Not that believing the story is a necessity since that’s more than common in movies but Korean films often insert some twists or borderline slapstick scenes that just robs the film of what it was likely trying to achieve in the way of a credible story. This makes up for some of that stupidity with lots of action and familiar stuff from other movies. The casting could have been a bit better but the biggest flaw, for us, was some terrible acting on the part of several main characters. It’s flaws taken individually aren’t much but when added up they take enough away from the overall project to make it less than what it could have been with at least a half hour of cutting and dropping the lame attempts at humor… just stick to the action and a tighter script. As a period piece the sets were extraordinary and ended up being the best part of the film… and it’s not good when that happens.
One person found this helpful

ColeReviewed in the United States on May 18, 2019
5.0 out of 5 stars
Don’t miss out on this movie. Absolute perfection!
Verified purchase
I absolutely love this movie!!! I had rented it twice before and decided I would watch it again and didn’t want to wait for a Netflix delivery!

The set designs and costumes appeared dead on. The acting second to none and the storyline was on par or better than anything coming coming out of Hollywood.

The South Koreans really know how to make excellent movies. This title is just one of many I have opted to purchase.
3 people found this helpful

Jaewoo KimReviewed in the United States on February 25, 2017
5.0 out of 5 stars
What a GREAT tribute to the Korean Independence Movement and their sacrifices.
Verified purchase
To those who do not understand the full meaning of this movie.

This movie was dedicated to the unknown and largely forgotten Korean independence fighters who have given up their lives against the oppression of the Japanese occupation of 1906 to 1945.

I applaud Jun Ji Hyun for taking on a decisively political role in favor of Korea.

Lee JungJae gave perhaps his finest performance for this film.

Nothing speaks of sincerity like giving your life for a cause you believe in.

This was one of the greatest Korean movies ever made. I highly recommend every Korean to watch this.
9 people found this helpful

HoppyRooReviewed in the United States on October 17, 2020
4.0 out of 5 stars
Yet Another Awesome Flick out of Korea
Verified purchase
Excellent camera work, set design, acting, audio, etc... All done really well. Tons of gun fights with a bit of hand to hand mixed in ( but not as much as any martial arts flick ).

There are a fair amount of characters, so if you aren't paying attention you could get lost, but it wasn't as many as some other flicks I've seen...

Either way... really cool flick with a few twists / turns that any action lover should check out. Will likely watch again... 2 thumbs up from me...

joel wingReviewed in the United States on November 29, 2021
3.0 out of 5 stars
Interesting and compelling story about Korean independence movement in the 30s
Verified purchase
Assassination is about the Korean independence movement during the early 1930s. It focuses upon three misfits, Jun Ji-hyun, Cho Jin-woong and Choi Deok-moon who are chosen to carry out a mission to kill the Japanese general in charge of Korea and a major collaborator. There are spies, double crosses and plenty of action. The intrigue keeps things interesting. There’s a large expenditure of ammunition. It all provides for an interesting and compelling story.

NemoReviewed in the United States on September 24, 2018
5.0 out of 5 stars
Incredible action movie!
Verified purchase
I had no idea what to expect from this movie, I bought it on chance. It's the best movie I've seen all year! The movie is about Korean Independent fighters who are fighting against the Japanese Occupation starting in the early 1900's. Great acting, great drama, great action and a super hot female lead make this a great film. There are twists and turns and levels of complexity as each person and group are out for their own interest. A must have for any Asian movie fan!
3 people found this helpful
See all reviews
Back to top
Get to Know Us
Make Money with Us
Amazon Payment Products
Let Us Help You
EnglishChoose a language for shopping. United StatesChoose a country/region for shopping.
© 1996-2021, Amazon.com, Inc. or its affiliates