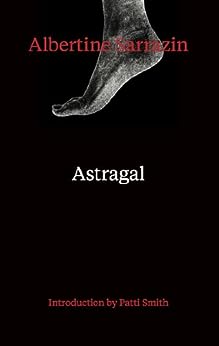 As alive as a Godard movie, this lost classic of ’60s French literature is back

As if the reader were riding shotgun, this intensely vivid novel captures a life on the lam. “L’astragale” is the French word for the ankle bone Albertine Sarrazin’s heroine Anne breaks as she leaps from her jail cell to freedom. As she drags herself down the road, away from the prison walls, she is rescued by Julien, himself a small-time criminal, who keeps her hidden. They fall in love. Fear of capture, memories of her prison cell, claustrophobia in her hideaways: every detail is fiercely felt.

Astragal burst onto the French literary scene in 1965; its fiery and vivacious style was entirely new, and Sarrazin became a celebrity overnight. But as fate would have it, Sarrazin herself kept running into trouble with the law, even as she became a star.

She died from a botched surgery at the height of her fame. Sarrazin’s life and work (her novels are semi-autobiographical) have been the subject of intense fascination in France; a new adaptation of Astragal is currently being filmed. Patti Smith, who brought Astragal to the attention of New Directions, contributes an enthusiastic introduction to one of her favorite writers.

You can take the girl out of prison, but you can't take prison out of the girl. Anne, the nineteen-year-old narrator of Albertine Sarrazin's Astragal has liberated herself from "prison school" by jumping off a thirty-foot wall. Landing, she breaks her left ankle, but this injury may be less grievous than the lingering effects of her incarceration. She has a disturbing awareness that even now, on the outside, she is a creature of the institution. Eventually, her ankle having partially healed, Anne begins working as a prostitute and living on her own in a series of hotels. But her life still consists of waiting (for her boyfriend, for customers) and hiding (from the cops). Her agency, cramped by life both in and out of prison, is forced to reside in her impetuousness, her salutary arrogance, and, most significantly, in the way she frames her own experience—that is, in the prose we're reading, which is hard-boiled, funny, sometimes gross, oscillating between indolence and intensity, riddled with ellipses and exclamation points. It is wayward, hard to pin down; it can't be forced to behave. —Elizabeth Schambelan --This text refers to the paperback edition.

Albertine Sarrazin (1937–1967) was a French-Algerian writer. At an early age she abandoned her studies and turned to a life of crime and prostitution. She wrote her first two novels in prison and died at twenty-nine.

Patsy Southgate (1928–1998) was an integral figure of both the 1950s Parisian literary scene and the New York School.


Patti Smith is a poet, performer, visual artist, and author of the National Book Award-winning memoir Just Kids. She has twelve albums, has had numerous gallery shows, and continues to give concerts of her music and poetry. Her books include Early Work, The Coral Sea,Witt, Babel, Auguries of Innocence, Woolgathering, Land 250, Trois, and many others. She lives in New York. --This text refers to the paperback edition.

"The prose is hard-boiled, funny, sometimes gross, oscillating between indolence and intensity, riddled with ellipses and exclamation points. It is wayward, hard to pin down; it can’t be forced to behave. There are associative leaps, synesthetic flights, and characters introduced without preamble or identification. Sarrazin brooked no exposition, no laborious knitting of circumstance to circumstance. One might call her style stream-of-consciousness, but that modernist term fails to account for the impression of Pop hyperreality that communicates itself through her steady drumbeat of allusions."
― Bookforum

"With Astragal’s English reissue and Patti Smith’s new introduction, there is the hope, perhaps slight, that Sarrazin will find a new audience and, with it, a new kind of freedom."
― Sara Freeman, The Brooklyn Rail

"Sarrazin’s career may have been tragically curtailed, but her legacy is a novel that grateful readers are discovering now, almost 50 years after her death."
― Pop Matters

"The story ― drawn from Sarrazin’s own life ― of Anne’s escape from prison, subsequent incapacitating ankle break (the book is named for the bone she snaps), and arduous recovery, is so alive with Anne’s voice that reading it, one wants simply to remain in her presence, to sit by her bedside as she squirms, frustrated, towards recovery. Anne makes good company."
― Full Stop

"Smith's essay and Sarrazin's crackling and incandescent prose make Astragal a gift, a memento of a decade that was both rough and radical, yet full of potential, and the testament of two astonishing lives, one real, one fictive, both self-invented and utterly extraordinary."
― Bookslut --This text refers to the paperback edition.
Read more

Amazon Customer AMS
4.0 out of 5 stars Very French
Reviewed in the United States 🇺🇸 on June 8, 2013
Verified Purchase
Quite a story, much of which concerns an ankle. It reminded me in many respects of existentialist writers like Sartre; it is very present-oriented, not like a chronicle of things past; things HAPPEN. Since I do not read French, this may began artifact of translation, but in any event, it makes for a compelling read.
Read more
3 people found this helpful
Helpful
Report abuse

Suzanne M. Wheat
4.0 out of 5 stars Meditation on Marginality
Reviewed in the United States 🇺🇸 on July 26, 2013
Verified Purchase
I can see why this book so affected Patti Smith as a young woman when she first read it. Strength, Courage, Misfortune and Marginality all rolled up into one piece in this poetic exploration of youth.
Read more
3 people found this helpful
Helpful
Report abuse

Paul
4.0 out of 5 stars prison...
Reviewed in the United States 🇺🇸 on May 25, 2013
Verified Purchase
... Both in jail and out. This wonderful little read is transformative. One of the few books i plan to read again
Read more
4 people found this helpful
Helpful
Report abuse

LindaB
5.0 out of 5 stars I wish I'd read it 40 years ago
Reviewed in the United States 🇺🇸 on June 2, 2014
Verified Purchase
A wonderful translation of a book that would have made a difference 40 years ago. I can see why some modern writers refer back to this book so often.
Read more
Helpful
Report abuse

Nancy B.
1.0 out of 5 stars One Star
Reviewed in the United States 🇺🇸 on October 21, 2014
Verified Purchase
I didn't like the story. It was a must read in my book club
Read more
One person found this helpful
Helpful
Report abuse
See all reviews

Paulo
3.0 out of 5 stars A well written story if a little slow going in places.
Reviewed in the United Kingdom 🇬🇧 on September 11, 2016
Verified Purchase
It's a well written story with a great opening. I read this straight after Papillon which was a great adventure so was expecting a more dramatic tale. It is perhaps a more realistic account than Papillon and not as epic a journey. It was a pleasant read with sensitive observations on relationships and circumstances along the way. It's more a 3.5 than 3 star because I did like the story and the style but it didn't grab me like Papillon or Banco, the sequel to Papillon. It's a relatively short book and it made a good travel companion, giving me a taste of France of half a century ago.
Read more
Report abuse

Amazon Customer
5.0 out of 5 stars Five Stars
Reviewed in the United Kingdom 🇬🇧 on September 9, 2017
Verified Purchase
Loved this book. Was transported and couldn't put it down.
Read more
Report abuse