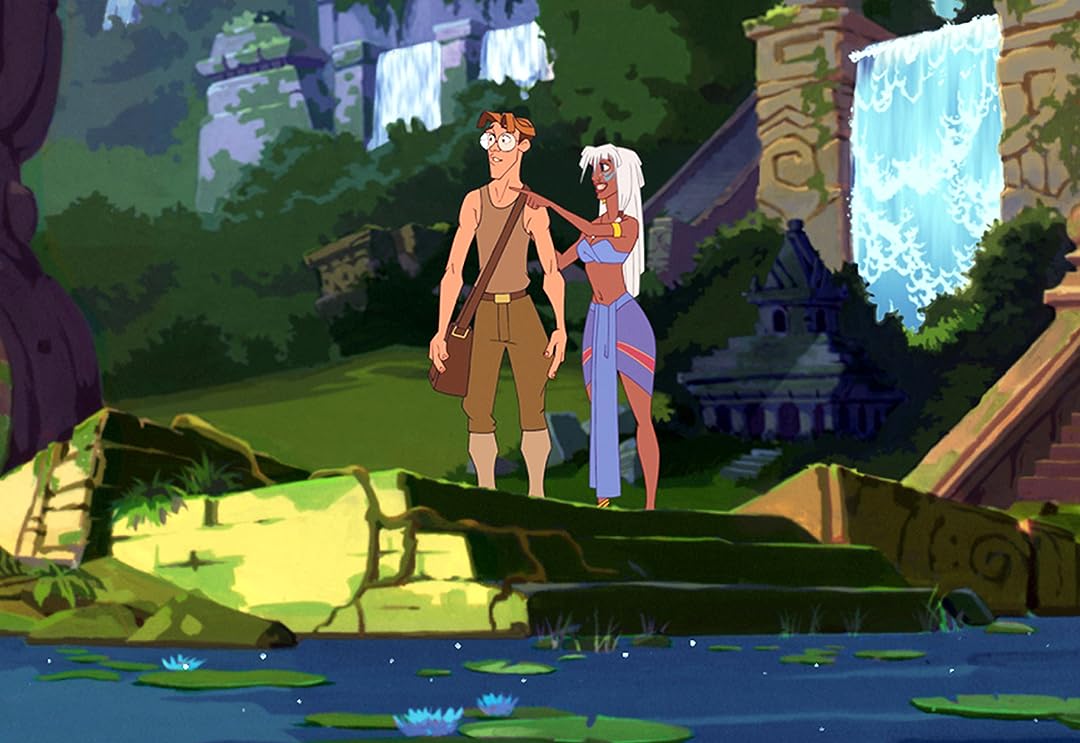 RDDReviewed in the United States on February 22, 2017
5.0 out of 5 stars
A Fun Film
Verified purchase
While it would be reductive to describe a movie by simply comparing it to another film, "Atlantis: The Lost Empire" closely resembles the 1994 film "Stargate" in many respects. Both involve the discovery of an alien culture with ties to our past and star a nerdy professor who joins a crack military team only to find their leader has ulterior motives and he must protect the alien culture. Unlike "Stargate," which begins in the 1920s before moving to what was then the modern day, "Atlantis: The Lost Empire" takes place in 1914 and has a steampunk aesthetic in its depiction of technology. Despite its white male protagonist (voiced by Michael J. Fox), this is one of the most diverse Disney films, with African-American, Native American, Latina, and French characters. The Atlantean world building, from technology to characters, is gorgeous and Marc Okrand created the language the characters speak (he also created Klingon for "Star Trek"). It's one of the better films from the post-Renaissance period of Disney movies.
12 people found this helpful

NazReviewed in the United States on October 29, 2017
4.0 out of 5 stars
A nostalgic animated film I still enjoy from my past
Verified purchase
I’ve got an interest in anything Atlantis and a soft spot for Michael J. Fox.

I saw this film many moons ago when I was a kid and loved it. So it is one of those nostalgic movies for me.

Pros:
Great mix of CGI animation with old fashioned 2D hand drawn animation.
Great voice actors. Amazing talent that brings characters to life.
Humorous fantasy )almost like an Indiana Jones in a sci di setting) with fun action scenes, and no singing.
Good commentary of movie by various producers (representing the animation department, talent, and cinematography areas of the film) Found in the extra features.
This film is geared for the entire family (adults and children)

Cons:
Although interesting storyline, it has plot holes galore, and contradictory things throughout. So those who like to pick apart films or find such things beyond annoying won’t like this film.

Torin McFarlandReviewed in the United States on March 15, 2021
5.0 out of 5 stars
A fun, then-new take on Adventure series animation; quite nostalgic for me
Verified purchase
I recently bought this to watch again after more than a decade without, and the film holds up reasonably well. I always love seeing sci-fi tech in a film set in the past, and this is no different. It reminds one of a children's League of Extraordinary Gentlemen, with a more inclusive and female cast. The action keeps one engaged, even adults, and for the most part, our quirky ingenue of a protagonist is likable, relatable, and more courageous than he ever knew. I will say that the hypersexualization of the female lead, while consistent with animators at the time and other characters in this film, detracts from the film. However, I (in my white maleness) feel this doesn't negate the film's feminist credentials in that (SPOILER-ish) the women essentially save the day in the climatic battles, both past and present. My two cents. Overall, i highly recommend the film to kids, young adults, and adults with a bit of whimsy :)

Austin Ritchey PearsallReviewed in the United States on April 29, 2020
5.0 out of 5 stars
Easily a hidden gem in the Disney franchise.
Verified purchase
A story as old as time, brought to theaters in an eye-candy level of amazing animation. Despite this movie failing in box office due to poor advertising, this movie really shows when Disney was at its peak during animation. The 2D animation was at its very best, and it blended the 3D ever so well. It especially evident with a certain cyborg character in the movie, whose arm is 3D, while the character themself is 2D. You completely forget that the two are separate while being swept away in the adventure.

Though, I will admit: if you've already read the original "Treasure Island", the story overall might not have quite as many surprises for you. I never read it, so the story was essentially new to me, but I've heard some who have read the book say that it essentially follows it.
One person found this helpful

Michael Patrick BoydReviewed in the United States on May 11, 2012
5.0 out of 5 stars
Milo to the rescue
Verified purchase
Atlantis: The Lost Empire is one hour and thirty - six minutes and was released in theaters on June 15th, 2001. The movie tells the story of Milo Thatch, grandson of Thaddeus Thatch, who believes that his grandfather tales of Atlantis are true. When the board on the Smithsonian Institution rejects Milo's request to fund and expedition to find the Shepherd's Journal in Iceland, he quits his job and heads home. At his residence, a woman there offers him a chance at adventure. Milo is taken to Preston B. Whitmore who once knew his grandfather and offers to fund the expedition to Atlantis. Milo and the crew set off to find Atlantis and is met by resistance from some of the Atlantean's creatures. They find Atlantis and are greeted by Kidagakash "Kida" Nedakh, the Princess of Atlantis. Milo is interested in Atlantis for scientific gain and to restore his grandfather's name, the crew of the Atlantis expedition is in it for monetary gain, and Kida is interested in Milo because she believes he can help save her people. I am leave out some details so I can get to the end. In the end Milo becomes the hero and along with Kida help save Atlantis; I just won't say how.

Atlantis: The Lost Empire was filmed in CinemaScope format instead of the standard movie format. The directors felt that with wide-screen format, they could keep the characters in the film longer and gave them better walking distance. Granted the movie did moderately well in theaters, it was not a blockbuster movie and received mixed reviews from movie critics. If you don't count Dinosaur, this was Disney's first non musical since The Rescuers Down Under came out in 1990. Finally this was Jim Varney final film; he died before the completion of the film. Atlantis: The Lost Empire is a good action\adventure film that even adults will like and gets an AAA+++.

J. AlfordReviewed in the United States on January 23, 2010
4.0 out of 5 stars
Atlantis rises again
Verified purchase
Despite getting alot of flack from animation buffs, Disney made a genuine effort to make a musical-free adventure movie in the spirit of Raiders. Even though very influenced by the works of Jules Verne, and the art stylings of Mike Mignola(Hellboy), this steampunk film was brilliantly animated and delivers in ways that the last Indiana Jones movie didn't.

Taking place in 1914, Milo Thatch is an expert in cartography, but unfortunetly stuck working in the boiler room of a history museum. After failing to convince his curators to investigate some recent findings he believes will proove the existence of the lost kingdom of Atlantis, he is luckily hired an eccentric millionaire who was an old explorer buddy of his grandfather. Milo becomes part of an excavation team going in a totally ahead of its time submarine to find Atlantis, commanded by the opportunistic Rourke. Using an ancient journal, they track their way underwater to a tunnel that is supposed to lead to their goal, but they're attacked by a giant mechanical sea monster and have to abandon their submarine into smaller mini-subs. They manage to find a series of underground caverns, which eventually leads to the actual city of Atlantis. Milo and the others are shocked to discover that there is an actual living civilization of people there who can conveniently speak English. They are turned away by the xenophobic Atlantian king, but his daughter Kida(who is Disney's finest Princess, and the first black one!)befriends the nerdy-as-hell Milo, and together they manage to decipher where the mysterious power source that supports their society, and has kept them alive for the last few millenia. However, its revealed that Rourke and most of his team were really looking for the power source too, which is a mystic floating crystal, and after taking the king hostage, they make their way to the crystal chamber. Kida becomes infused with the crystal's powers, and Rourke makes off with her, leaving the king dying of a gunshot wound. Milo gets some of the remaning crew along with the other Atlanteans to go after them with some reactivated flying machines. After a pretty intense chase scene, they catch up with Rourke and stop him. The crystal is restored, and Kida becomes the new tribal leader. Milo decides to stay behind(who wouldn't want to spend eternity with a hot bikini babe?!)while the other explorers make it back to the surface with a bunch of treasure.

Atlantis was a serious step up from some of Disney's other action/adventure films. Granted, ones like Aladdin, The Black Cauldron, and Treasure Planet had decent elements of thrills & spills, but Atlantis went that extra couple of yards to make it real swashbuckling ride. There's a fine use of CGI along with traditional 2d Disney animation, although its one of the few ones they did in anamorphic widescreen which totally broadens the scope of visual experience for an underwater adventure. The movie also has one of the finest casts in a Disney film, with Michael J. Fox as Milo, James Garner as Rourke, veteran voice actress Cree Summer as Kida, Leonard Nimoy as the king, and Jim Varney in his last film role. If you passed on this film when it was in the theatres, make sure to catch it on DVD(and hopefully soon on Blu-Ray). Even though you can sorta skip on the sequal.
7 people found this helpful

JashundraReviewed in the United States on November 21, 2016
5.0 out of 5 stars
Great movie!!!!
Verified purchase
One of the best movie of my childhood I don't understand why it did get big like these other movie. its amazing on so many levels I had it when I was little on. And when I saw it on DVD here I had to get it and it still makes me cry just as it did when I was a little girl! I love this movie
5 people found this helpful
See all reviews
Back to top
Get to Know Us
Make Money with Us
Amazon Payment Products
Let Us Help You
EnglishChoose a language for shopping. United StatesChoose a country/region for shopping.
© 1996-2021, Amazon.com, Inc. or its affiliates