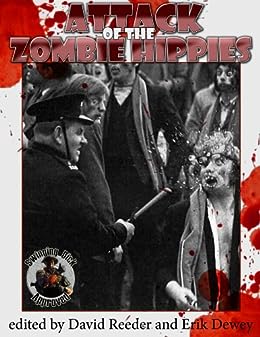 "...Some would say that we live in an age of political correctness. Perhaps so, but that alone isn’t the reason we should look to the Zombie. Any given race, ethnic group or religion is made of people and they are all different. Some are extraordinary and some are pure evil. To demonize a group of our fellow man based attributes that don’t define moral character not only dehumanizes them but us as well. So why not just adopt the anti-human as your foe? With the Zombie, you can train all day long and concentrate on the challenge. You don’t have to ask yourself why you chose that target and you don’t have to explain to your neighbors at the range. The Zombie is the prefect bad guy..." Eric Graves, Soldier Systems Daily

Collected to support Independence Fund (www.IndependenceFund.org), 'Attack of the Zombie Hippies' is an anthology of zombie fiction and non-fiction 'instructional' pieces about life during (and how to deal with) a zombiepocalypse...but not just any zombiepocalypse - a HIPPIE zombiepocalypse. Featuring fiction from many up and coming writers as well as training articles and op-ed pieces from some of the biggest names in the tactical training industry, it is the publishers' hope that this book entertains as much as it educates.

With a gracious thumbs up from J.L. Bourne (author of Day by Day Armageddon) and forward from Eric Graves, Founder and Editor of Soldier Systems Daily.
Read more
Previous page
Next page

4.0 out of 5 stars
4 out of 5
9 global ratings
How are ratings calculated?
To calculate the overall star rating and percentage breakdown by star, we don’t use a simple average. Instead, our system considers things like how recent a review is and if the reviewer bought the item on Amazon. It also analyzes reviews to verify trustworthiness.
Top reviews

J. W. Mullins
VINE VOICE
5.0 out of 5 stars Fun short stories
Reviewed in the United States on May 12, 2013
Verified Purchase
Just so no one thinks I'm being a shill I want to say that two of the short stories in this book I wrote. I can assure you that with the exception those two most of the other stories are very good.

The idea behind this book was to put together tactically 'sound' stories using zombie hippies as the foil and mixing it with actual advice from current tactical trainers. And to do so for a good cause, supporting the Independence Fund. The stories run the gamut from fairly simple in writing style to fantastic. Several of the stories I wish were made into actual books they were so good. The use of zombies who were or are hippies are the one common throughout the book and ties it together in a way. The tactical training sections are sometimes very real work and practical and sometimes the training having a bit of fun by playing along with the zombie concept as well. I enjoyed the book and most of the stories and hope to see another project like it in the future.
Read more
2 people found this helpful
Helpful
Report abuse

Wardog
5.0 out of 5 stars Tie-dyed Mayhem
Reviewed in the United States on August 20, 2014
Verified Purchase
I held out for as long as I could stand it on a deadtree version and finally capitulated and got the Kindle one.

I laughed many, many times. Out loud, on the ground rolling around and trying not to pee - which is pretty hard for an old jarhead with prostate issues. I know a couple of the writers in the anthology from various places on the InfernalNet - and like the rest of the crowd, they didn't disappoint. There were even a couple of stories that creeped me out - kinda hard to do to me with all those BTDT t-shirts I have. If you are on the fence or "over" the whole zombie thing, get this, you won't be disappointed.
Read more
Helpful
Report abuse

The coupon codes for gear companies included throughout the book make it worth the price paid, even if you don't like the book itself.
Read more
Helpful
Report abuse

Chris
1.0 out of 5 stars Title rocks. That's it.
Reviewed in the United States on January 3, 2014
Verified Purchase
I tried, but stopped at about 3 chapters. Different writers doesn't work. Text ads are confusing - hard to tell if they are part of the story or not. In hindsight, I wouldn't get this book unless the authors paid me.
Read more
Helpful
Report abuse

john n
3.0 out of 5 stars Short stories, but ok
Reviewed in the United States on March 7, 2013
Verified Purchase
It is what it is, I would go back and read it here and there, a few short stories from some good companies. It was ok
Read more
Helpful
Report abuse

SandyO
5.0 out of 5 stars Great little stories!
Reviewed in the United States on October 6, 2013
Verified Purchase
I'm a fan of Walking Dead, but these stories have a different twist on the zombie saga and were very enjoyable.
Read more
Helpful
Report abuse

USNGunner
5.0 out of 5 stars Outstanding collection. Not for the faint hearted.
Reviewed in the United States on January 3, 2013
Verified Purchase
Very nicely done collection of tongue in cheek zombie stories. Definitely for a mature audience though. I really enjoyed it.
Read more
Helpful
Report abuse

Goddess Nevermind
5.0 out of 5 stars Five Stars
Reviewed in the United States on August 13, 2014
Verified Purchase
Anthony Sarlo's contribution is really good. I wish I could get this in paperback.
Read more
Helpful
Report abuse
See all reviews
Back to top
Get to Know Us
Make Money with Us
Amazon Payment Products
Let Us Help You
EnglishChoose a language for shopping. United StatesChoose a country/region for shopping.
© 1996-2021, Amazon.com, Inc. or its affiliates