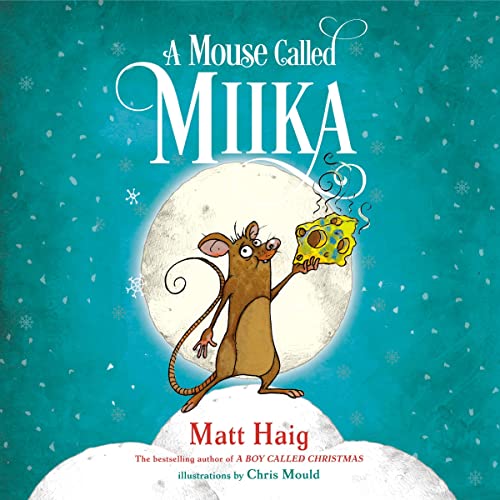 Ratatouille meets Roald Dahl in the funny and fantastical story of a determined mouse on a mission to procure the world's tastiest cheese. From the author of A Boy Called Christmas - coming soon to Netflix!

When Nikolas left the only home he had ever known, it was a mouse named Miika who kept him company, and it was Miika who accompanied him on his journey to the Far North, in search of his father. But before the events of A Boy Called Christmas, this little mouse was the hero of his own story.

A Mouse Called Miika is an epic adventure story on a miniature scale. It's a tale of mice and men (and more mice). It is about one independent mouse who gets fed up with the other mice, sets out on a quest of his own to prove that cheese exists, and learns to appreciate other creatures. It is also a tale of great love (of cheese) and great danger. And learning the lesson that, with cheese, as with life, what matters most is not how strongly you smell, but how strong you are on the inside.

Funny, cheeky, wise, and packed full of Matt Haig's signature warmth. This is set to become a year-round children's favorite.

Special invitation from Audible!
Learn more about Membership
List Price: $25.20
You Save: $3.15 (13%)
By completing your purchase, you agree to Audible’s Conditions Of Use
Sold and delivered by Audible, an Amazon company
Share

4.8 out of 5 stars
4.8 out of 5
10 global ratings
How are ratings calculated?
To calculate the overall star rating and percentage breakdown by star, we don’t use a simple average. Instead, our system considers things like how recent a review is and if the reviewer bought the item on Amazon. It also analyzes reviews to verify trustworthiness.
Top reviews

Alluraluna
5.0 out of 5 stars Sweet story, fun illustrations, awesome message
Reviewed in the United States on November 14, 2021
Verified Purchase
This is and adorable story for middle grade kids, but adults will also enjoy the lovable characters, enjoyable art, and the uplifting and positive message.
Read more
Helpful
Report abuse

CS
VINE VOICE
5.0 out of 5 stars A Wonderful Story About the Power of Believing in Yourself
Reviewed in the United States on December 4, 2021
Verified Purchase
If you’ve read A Boy Called Christmas, The Girl Who Saved Christmas,Father Christmas and Me and / or The Truth Pixie, you’ll have some idea of the charm and adventures in this latest in Matt Haig’s Christmas series.

An epic escapade, the story of a mouse named Miika who never knew his dad, and although he knew his mum, Ulla, was ’very, very very tired’ with thirteen little mice to care for, she fell asleep before she could get around to naming him. He was always hungry, the weakest and the smallest, the last one born, and the one who went largely ignored by his Mum. So one early morning, when the other mice are sleeping, he decides to leave his home in the tree. He pauses before leaving, saying goodbye to everyone, including his Mum, but no one is listening.

He meets Bridget the Brave, who lives in another tree where she has piles of mushrooms and elf cheese, and an adventure begins.

Like the other books in this series aimed at Middle School readers, there is a subtle message about the things in life that really matter, and the power attained by believing in yourself.
Read more
Helpful
Report abuse
See all reviews

Liz
5.0 out of 5 stars Magical and heartwarming
Reviewed in the United Kingdom on December 1, 2021
Verified Purchase
I read this with my 7 year old son and we both absolutely loved it. Good length as it’s short enough to keep their interest but long enough to have a good story line. Absolutely wonderful with some great messages around kindness and friendship
Read more
Report abuse

Lynn
5.0 out of 5 stars A fantastic story book for my 9 yr old
Reviewed in the United Kingdom on November 10, 2021
Verified Purchase
My son loved this story of Miika the mouse. He couldn't put it down. when it was finished all of his friends wanted to borrow the book.
fantastic buy for a young reader (9yrs)
Read more
Report abuse

Marie
5.0 out of 5 stars Magic!!!
Reviewed in the United Kingdom on November 12, 2021
Verified Purchase
A beautiful book! Highly recommend! Me and my 7 year old daughter loved this book!
Read more
Report abuse
See all reviews
Back to top
Get to Know Us
Make Money with Us
Amazon Payment Products
Let Us Help You
EnglishChoose a language for shopping. United StatesChoose a country/region for shopping.
© 1996-2021, Amazon.com, Inc. or its affiliates