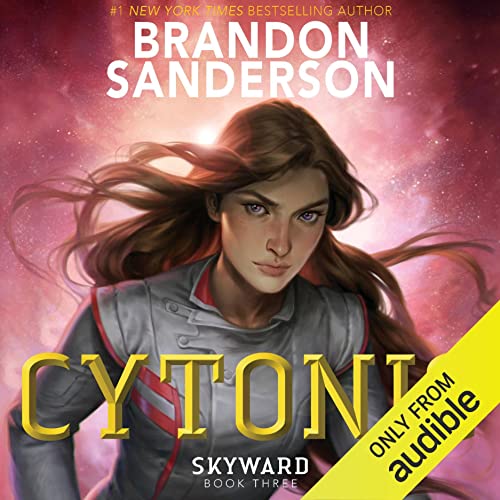 From the number one New York Times best-selling author of the Reckoners series, the Mistborn trilogy, and the Stormlight Archive comes the third book in an epic series about a girl who will travel beyond the stars to save the world she loves from destruction.

Spensa’s life as a Defiant Defense Force pilot has been far from ordinary. She proved herself one of the best starfighters in the human enclave of Detritus, and she saved her people from extermination at the hands of the Krell - the enigmatic alien species that has been holding them captive for decades. What’s more, she traveled light-years from home as an undercover spy to infiltrate the Superiority, where she learned of the galaxy beyond her small, desolate planet home.

Now, the Superiority - the governing galactic alliance bent on dominating all human life - has started a galaxy-wide war. And Spensa’s seen the weapons they plan to use to end it: the Delvers. Ancient, mysterious alien forces that can wipe out entire planetary systems in an instant. Spensa knows that no matter how many pilots the DDF has, there is no defeating this predator.

Except that Spensa is Cytonic. She faced down a Delver and saw something eerily familiar about it. And maybe, if she’s able to figure out what she is, she could be more than just another pilot in this unfolding war. She could save the galaxy.

The only way she can discover what she really is, though, is to leave behind all she knows and enter the Nowhere. A place from which few ever return.

To have courage means facing fear. And this mission is terrifying.

Special invitation from Audible!
Learn more about Membership
List Price: $34.95
You Save: $4.96 (14%)
By completing your purchase, you agree to Audible’s Conditions Of Use
Sold and delivered by Audible, an Amazon company
Share

4.5 out of 5 stars
4.5 out of 5
2,702 global ratings
How are ratings calculated?
To calculate the overall star rating and percentage breakdown by star, we don’t use a simple average. Instead, our system considers things like how recent a review is and if the reviewer bought the item on Amazon. It also analyzes reviews to verify trustworthiness.
Top reviews

Logan
2.0 out of 5 stars Too much convenience
Reviewed in the United States on November 29, 2021
Verified Purchase
I would consider this the weakest Sanderson book I've read. It's unfortunately slow, meandering, and full of convenient plot events that baffled me. The tone changed multiple times throughout and rarely matched the political military themes of the first two books. I heard that this was Brandon's most revised novel and it definitely shows. I know this is YA but the series had such strong writing that I don't believe that can be used to justify it.

If book two had ended on less of a cliffhanger I would have made this series a duology for me. I'll probably read book 4 because I support Brandon but I don't have high expectations.

*SPOILERS AHEAD*
The book opens with Spensa arriving in a jungle with pink sky. She is captured by pirates but then saved by a swashbuckling Indiana Jones-like riding an alien dinosaur. This opening scene sets much of the tone for the rest of the book. An adventure story across floating islands, fleeing monsters and pirates that are more reminiscent of Pirates of the Caribbean than space opera.

The mysterious and genuinely scary delvers, Lovecraftian horrors that couldn't (and I believe shouldn't) be understood, devolved into angry ascended AIs that didn't know how to deal with emotion. Emotions granted to them somehow by the nowhere. M-Bot getting emotion as well was not like in the previous book. He became annoying and his emotions were often played for gags. I enjoyed Chet at times but he also was very comedic in an annoying way.

So in the end we spend almost no time with any established characters from either prior novel, have two comedic side-kicks, have a romp through pirate land with a showdown over who gets to be the "Pirate Champion", and end with Spensa gaining over-the-top super powers to defeat the baddies.

I feel like this book is the sequel to a completely different series. And for that I give it 2 stars.
Read more
27 people found this helpful
Helpful
Report abuse

Andrew Oliner
3.0 out of 5 stars Disappointing after two great books
Reviewed in the United States on December 6, 2021
Verified Purchase
For the first time in this series, I got impatient reading this. The plot seemed to move at a snails' pace. For most of the book, the plot seemed aimless and repetitive. All of the elements that had made the previous books so exciting were missing. What was left was an endless slog through a repetitive landscape with uninteresting characters.

I kept waiting for the payoff at the end of the book, which I expected to be the conclusion of the series. Instead, it was "there's another book". At least Spensa is back in her own universe again, where interesting things happen to interesting characters. May they happen that way again!
Read more
11 people found this helpful
Helpful
Report abuse

CARTWHEEL
3.0 out of 5 stars Pretty good
Reviewed in the United States on November 27, 2021
Verified Purchase
1st half seemed like filler. Second half was really good. I remember the book really picking up around 45% progress. Overall, not one of my favorite installments of this series but at this point, I'm committed and will read anything having to do with the series, including the novellas. I really enjoy the storyline as a whole.

This book was more of a side plot that deviates away from the main story line of fighting the Superiority.

Spensa's storyline is focused on the delvers, which to me, didn't turn out to be as interesting as the main plot line. The reasoning behind the delvers hatred just seemed so silly to me and not fully fleshed out. An advanced AI based on logic but with recent sentient emotions just couldn't handle the loss of a loved one, and completely shut down and wanted to destroy anything that bothered them...? Really...?

I actually preferred the Redawn novella to this book since it had more to do with the war.

I loved the introduction of Peg and Shiver as characters. I hope they are woven into the upcoming books.
Read more
6 people found this helpful
Helpful
Report abuse

T. Reads
2.0 out of 5 stars Where are the characters from the first book?
Reviewed in the United States on December 6, 2021
Verified Purchase
The first book was great! We loved the characters — then they all got sidelined. Why? Book 2 and book 3 introduced weak characters that we care nothing about. I had never read a Sanderson book I didn’t like then Oathbringer, then these two books and I’m still waiting for Wax and Wayne and the Evil Librarians, I didn’t bother with Rhythm of War. — it’s like a Sanderson pandemic! Sanderson needs a new editor to tell him the truth about how boring his books have gotten! Bless his heart ❤️
Read more
6 people found this helpful
Helpful
Report abuse

Kindle Customer
3.0 out of 5 stars Adventure!
Reviewed in the United States on November 24, 2021
Verified Purchase
None of the books in this series quite match, and while that is fine, I'm not a huge fan of adventure! novels. So, if you are looking for some exploration and pirates, enjoy, otherwise be prepared for a lot of time spent on random encounters before getting to some exciting plot at the very end.
Read more
5 people found this helpful
Helpful
Report abuse

James Witt
3.0 out of 5 stars I did not love it.
Reviewed in the United States on December 4, 2021
Verified Purchase
This is the first Sanderson book I have scored a 3. It was boring to read, so much so I constantly fell asleep while reading, during the day! The adventures were too sparse and the whole book felt like an exploration of feelings for children. I read it all the way through, but I did not enjoy it. Even the ending which is normally full of excitement was.. yee…
Read more
2 people found this helpful
Helpful
Report abuse

barleyguy
5.0 out of 5 stars Loved it
Reviewed in the United States on January 11, 2022
Verified Purchase
This is an excellent book IMO. It's got pocket realities. It's got pirates. It's got jet battles. It's got AI. It's got a little bit of doomslug.

Keywords would be "exciting" and "fun" and "fantastical".

My only complaint is that the end doesn't resolve and that I have to wait probably another year or two for the fourth book.

Amazon is asking me what age kid I got this book for. I'm an adult. I got it for myself, and loaned it to my adult friends. It would be great for teenagers and young adults too, or maybe a smart 10 year old.

Jon Trauntvein
5.0 out of 5 stars Explores Pain and Loss in a Physical Way
Reviewed in the United States on December 9, 2021
Verified Purchase
I have loved every book of Brandon Sanderson's that I have had the chance to read and this one is no different. I don't know what his personal experiences have been but sense that he has a deep understanding of loss and emotional pain and by reading his work, I learn more about myself. I think perhaps, that is the grand promise of fiction: it provides a safe place to feel and discover your own emotion and sense of self and you come away profoundly changed by the experience.
I have scanned over other disappointed reviews and feel sorrow that those readers could not gain the things that I did.
Read more
Helpful
Report abuse
See all reviews

Sipeter
5.0 out of 5 stars Typical Brandon! Wow!
Reviewed in the United Kingdom on November 25, 2021
Verified Purchase
The Skyward series is the first Science Fiction work of his I have read and they are as good as his fantasy novels which I have read and reread.
Cannot wait for the next in the series.
Read more
Report abuse

Adrian Carter
4.0 out of 5 stars Great read
Reviewed in the United Kingdom on December 12, 2021
Verified Purchase
Disappointing in as much it's the third book but no conclusion. Looking forward to the next book but makes you wonder how many books it will be stretched in to!
Read more
Report abuse

Elanor
5.0 out of 5 stars Mind blown once again
Reviewed in the United Kingdom on January 16, 2022
Verified Purchase
Wow. Mind blown. That ending was absolutely brilliant and I can’t wait for the next book. I don’t think any author will ever be able to so consistently publish original, enthralling and absolutely amazing stories as Sanderson.
Read more
Report abuse

Mrs A S St.Clair
5.0 out of 5 stars Great books always
Reviewed in the United Kingdom on December 5, 2021
Verified Purchase
Love Brandon Sanderson and the final book in this series does not disappoint.
Read more
Report abuse

Amazon Customer
5.0 out of 5 stars good present
Reviewed in the United Kingdom on December 2, 2021
Verified Purchase
bought for a present
Read more
Report abuse
See all reviews
Back to top
Get to Know Us
Make Money with Us
Amazon Payment Products
Let Us Help You
EnglishChoose a language for shopping. United StatesChoose a country/region for shopping.
© 1996-2022, Amazon.com, Inc. or its affiliates