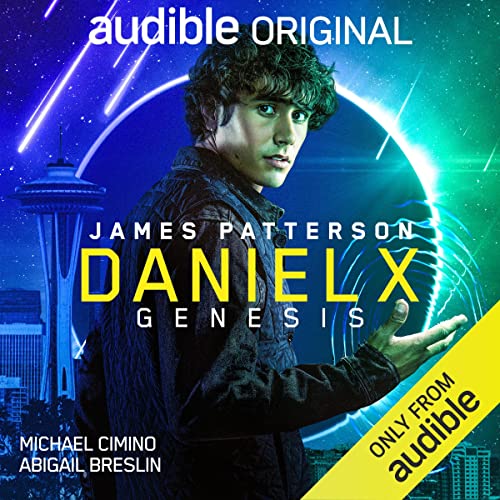 Daniel’s 16th birthday is starting out like any other day: He’s late for school, his homework’s due, his crush doesn’t know he’s alive, and his afterschool gig is a joke. There’s just one more thing: He needs to save the human race from annihilation.

James Patterson’s thrilling adventure series gets an exclusive, audio-only origin story in Daniel X: Genesis, brought to life by an all-star cast. We meet Daniel, an ordinary teen just trying to navigate his way through high school. That all changes when he discovers he has super powers and can conjure up anything, at any time, just by imagining it. Suddenly he’s meeting powerful entities who tell him he is not, in fact, a typical teenage human but an alien...and his parents died not in a car wreck but in an epic battle with an intergalactic villain.

Can Daniel find the courage to take up the fight? Can he use his powers to save the Earth? And can he finally get to shred onstage in front of thousands of screaming fans? So much to do, so little time.

Enjoy this audiobook free + more
Learn more about membership
List Price: $14.95
You Save: $1.87 (13%)
By completing your purchase, you agree to Audible’s Conditions Of Use
Sold and delivered by Audible, an Amazon company

Georgia McNabb
3.0 out of 5 stars Book Starts as if in the Middle of a Story
Reviewed in the United States 🇺🇸 on August 19, 2022
I purchased and listened to this on Audible books.
Though the story, once I figured out what was happening, was good. The start seemed to be sarted in the middle and was terribly confusing. The Storyline was action just about all the way through and Daniel was just about as lost as I was.
Narration was good, but parts were either way to quite to hear or the Music was Very loud.
Read more
Helpful
Report abuse

Amy Collins
5.0 out of 5 stars Ever wanted to be in a movie, but just listen to it?!?
Reviewed in the United States 🇺🇸 on August 23, 2022
Great, engaging story that pulls you right in to a fight to save (you guessed it) the world!!...wait or is the universe???
Read more
Helpful
Report abuse
See all reviews