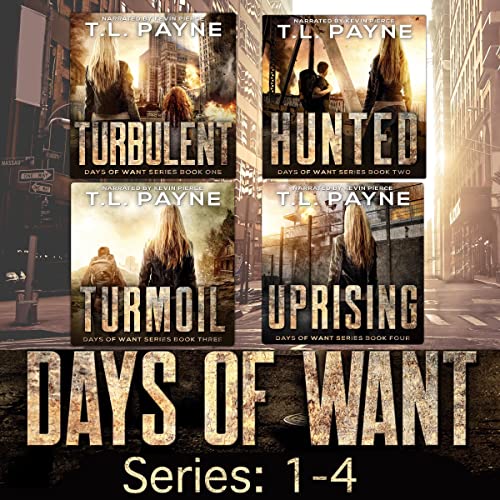 In an instant, everything stops. No lights. No phones. No transportation.

When an EMP attack wipes out the nation’s power grid and communications, college freshman Maddie Langston is forced to run for her life.

Stranded in a Chicago airport when the lights go out, Maddie is in a race against time. According to her father, she doesn’t have long before the city descends into chaos. She must leave the airport before it is too late.

The perilous journey out of the city becomes even more complicated when Maddie takes responsibility for an orphaned 10-year-old girl. Together, as chaos fills the streets, they must fight to survive in a Turbulent new world.

Maddie’s brother, Zach, has his own battles to fight as he struggles to get home to his family.

On the road to reunite with Maddie and Zach, Beth’s trip takes a twisted turn, but she won’t let anything prevent her from reaching her children.

Lily
5.0 out of 5 stars Very enjoyable
Reviewed in the United States 🇺🇸 on January 19, 2023
Verified Purchase
I especially like the balance character development and action. The characters took the actions needed for survival without angst even though they were affected emotionally there was no overdone gnashing of teeth and beating of breasts. Not only that but the author is able to let the story line demonstrate the importance of being prepared for hard times without being preachy a trap many post apocalyptic authors tend to fall into. In short, this was well balanced and well written series that most fans of the genre are likely to enjoy.
Read more
One person found this helpful
Helpful
Report abuse

Pamela S. Bennett
5.0 out of 5 stars Days of Want Series Books 1-4
Reviewed in the United States 🇺🇸 on December 30, 2022
Verified Purchase
This was my first books on EMP I will wait for book 5.
If you're going to have a go on this series, get ready for 🤔 as long as 4 books were I had to keep on.
This is a good book of fiction, but, at times I had to stop and rest with the experience that the survival families had and were going to have.
Excellent reading and eye opening.
Enjoy and learn.
Read more
One person found this helpful
Helpful
Report abuse

Denice
5.0 out of 5 stars Apocalypse Finest
Reviewed in the United States 🇺🇸 on November 21, 2022
Verified Purchase
This book really brought up a lot of things to thank about. For instance what would happen to people in prisons and mental health facilities? Why do the mean just get meaner? I enjoyed all the different characters and the stories they brought.
Read more
Helpful
Report abuse

Lisa Jackson
5.0 out of 5 stars WOW!! what a great series!
Reviewed in the United States 🇺🇸 on October 29, 2022
Verified Purchase
It has all the feels!! I laughed and cried too! Some characters made me angry and some I couldn’t help loving!! I’m on to book 5 next! I can’t wait to find out what happens!!
Read more
Helpful
Report abuse

Steven Neiland
2.0 out of 5 stars Too much technical too little personal
Reviewed in the United States 🇺🇸 on October 17, 2022
Verified Purchase
I really wanted to like this story but it has some serious problems.

First off the good. From a technical pov it is very detailed and thorough.

Now the bad, it is very detailed and thorough. Why is this bad, well when you spend two minutes on the character describing how she unpacks and repacks her provisions and worrying about where to put her gun you are just bogging the story down in the minutiae. Instead it could have been shortened to, she repacked her bag making sure the weapon was easily accessible. And every single chapter has the same problem. Detail is good, but not this much.

This whole story also feels like one big "told you so" where the main character ignored her fathers warnings and now is regretting it all the time.

At the same time too little time is spent on small details that do matter. The girls hunker down in a graveyard for a night but we are not told about how it felt, was the ground cold and wet, were there bugs biting their faces. The human aspect is there but it is always secondary to the main theme of "when shtf this is what you do".
Read more
5 people found this helpful
Helpful
Report abuse

Debra Knapp
5.0 out of 5 stars Well thought out and well told survival series.
Reviewed in the United States 🇺🇸 on September 20, 2022
Verified Purchase
This series was a great look into surviving in an emp environment. I loved the characters and the situation. Each novel carries the story that came before it but also is it’s own stand alone story with its own challenges and triumphs! I highly recommend this to any survivalist/post apocalypse fan.
Read more
2 people found this helpful
Helpful
Report abuse

S. Meyer
2.0 out of 5 stars Overly-Excited Wish-Fulfillment Fantasy For Doomsday Preppers
Reviewed in the United States 🇺🇸 on August 14, 2022
Verified Purchase
I'm giving one extra star from the lowest allowable number because the stories include a few good dogs. And the technical writing skill isn't bad.

Otherwise? Good grief! These are the kinds of scenarios a lot of the most grandstanding preppers and self-styled "survivalists" actually HOPE will happen, so they can be the heroes in the action movies they create in their heads. There's even a fair amount of strutting and bragging, "Yep, everyone thought we were crazy, but We Were Right All Along!" injected in between all the very happy gunfire, the higher the body count the better.

It's a shame, because there's a kernel or two of a good story here. But these doomsday horrors are told with such thinly veiled glee, the whole thing left a terrible taste in my mouth.
Read more
2 people found this helpful
Helpful
Report abuse

Nadia Elinbabi
4.0 out of 5 stars Sink into a new series
Reviewed in the United States 🇺🇸 on January 26, 2023
I’ve been absolutely burning through TL Payne’s books (all while thinking, dang I wouldn’t make it five months in the apocalypse).

I really enjoyed the female perspective (I’ve also been reading A. American books recently) - and while I feel like there are more tips and tricks about actual survival - I find the female characters to be less fulfilling. Payne brought forth a good deal of skill in developing her main characters enough that I could easily engage in their storylines as they switch throughout the books.

One thing I found a little jarring was the timeline - with the different perspectives I was often reading multiple character perspectives of things that were happening at the same time - but the chronology felt off because they were… well… chapters. It didn’t bother me for more than a few paragraphs.

Overall - if you enjoy survivalist stories (zombie apocalypse, prepper books, etc) and want to get engrossed in a nice, long series. I’d recommend this one.
Read more
Helpful
Report abuse
See all reviews

redangel
5.0 out of 5 stars good read
Reviewed in Australia 🇦🇺 on September 3, 2022
Verified Purchase
As good a read as the others from TL Payne, interesting characters and non stop action. Now onto the fifth book
Read more
Report abuse
See all reviews