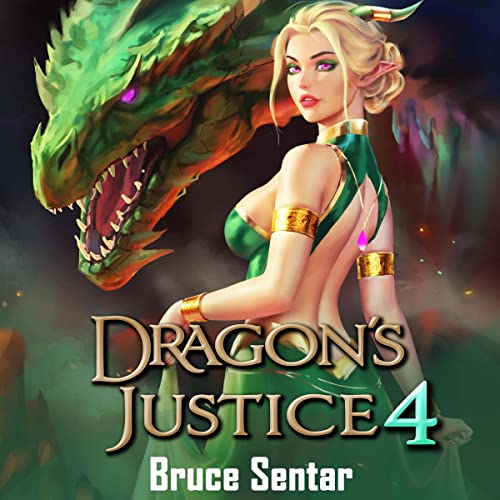 Zach and his ladies are packing up for the dragon conclave. He has enough on his hands trying to impress centuries-old dragons that he’s their new king.

But when a dragon arrives injured and another dies at the conclave, things grow tense at the conclave. Zach will need to step up as their new king and solve a problem so old it’s been forgotten.

As if he doesn’t have enough to deal with, as pushy dragons vie for his attention, he’ll have to solve a murder as well.

Your audiobook is waiting!
Learn more about membership
List Price: $24.95
You Save: $2.96 (12%)
By completing your purchase, you agree to Audible’s Conditions Of Use
Sold and delivered by Audible, an Amazon company
Share

J Krug
5.0 out of 5 stars Good book to finish up a lot of threads
Reviewed in the United States 🇺🇸 on November 10, 2022
Verified Purchase
This book finished up a lot of threads and left room for more in the future. There was a ton of action, adventure, magic, dragons etc all mixed in to a fun story and universe. I recommend this book and hope there are others set in this universe in the future.
Read more
Helpful
Report abuse

Jennifer Harms
5.0 out of 5 stars Great book
Reviewed in the United States 🇺🇸 on November 17, 2022
Verified Purchase
Great book and I can't wait to see what you write about next. This is what I have come to expect from this author.
Read more
Helpful
Report abuse

Kimberely Fordham
5.0 out of 5 stars I'm very much enjoying your books!
Reviewed in the United States 🇺🇸 on July 23, 2022
Verified Purchase
I've been enjoying the build up of the MC, and the various women. I honestly think that adding a spider queen to his harem wouldn't be a totally bad idea. He's got a thing for powerful women, and having a Wild Fae Queen as his besotted slavishly obedient and eager to do anything asked for a bit of his time, works. First she's gonna have to get there though. Humble pie will look good on her. I bet she'll have that Kate personality and be into the whole Dom thing. Like Poly, she needs a strong man to match her. I keep waiting for it to be revealed that Frank is related to the fauns of the forests, Satyrs. Maddie can end up being part Nymph, and welcome some sisters to giggle with and all play hard to get with Frank. Then after a lot of groveling and housework (dressed in a cute French maids outfit), decide to reward him and have a drunken orgy to his hearts content. When he wakes up rearing to go for round three? Maddie quips, "You will always be our King, right girls?! And, here's your royal septer!" And hands him a feather duster! Lol ! Then slaps his butt and orders him to clean up. If he does a good job, maybe he might be rewarded, and laughs with all her sister nymphs. A Satyr's work is never done!
Read more
Helpful
Report abuse

Devon Dupuy
4.0 out of 5 stars It Keeps Getting Better
Reviewed in the United States 🇺🇸 on October 6, 2022
Verified Purchase
These books have been such enjoyable reads. I feel like the humor is getting better and the growth of the main character’s power is steady and fun but not over done. Well done Mr. Sentar.
Read more
Helpful
Report abuse

Joshua Kurtz
5.0 out of 5 stars So good!!!
Reviewed in the United States 🇺🇸 on October 4, 2022
Verified Purchase
One of my favorite series. The books are written so well you can’t put them down. Can’t wait for book 5!!!
Read more
Helpful
Report abuse

Aaron Clemons
5.0 out of 5 stars I perfect cup of coffee!
Reviewed in the United States 🇺🇸 on June 14, 2022
Verified Purchase
This was everything I hope it be! A great continuation of the magical lore and world. It slips in very nicely from the previous books yet still grows!

I am loving how this author seems to keep you engaged with each new character and relationship formed. And I am not just talking about the saucy ones! The inner dialogue between his harem, close friends and new ones is just top notch! I like how the MC isn’t all 100% paladin prince or king. Or brooding bad boy, people are far more complex than that. They have flaws and weaknesses, I like how the MC is honest when he thinks it’s best. Humble when he doesn’t have to be. And most of all not dumb by just keeping secrets from those he loves but his advisors.

The overall plot of this book was I felt a bit too fast pasted but I like where it’s going back to the normal everyday paranormal issues. I did like how the MC didn’t just jump into conflict and go all scorched earth. Minor spoiler warning! (He needs to and gobble up a few vampire clans though).

Overall I enjoy the hell out of this book. Can’t wait for more of this series and the others from this author!
Read more
4 people found this helpful
Helpful
Report abuse

deiman17
5.0 out of 5 stars Favorite Series So Far
Reviewed in the United States 🇺🇸 on June 12, 2022
Verified Purchase
First to the author. I recently discovered your works and I have to say you are becoming one of my favorite authors. I really love Saving Supervillains and Dragons Justice. Take all the time you need, and I really appreciate how consistent you have been writing.
Now for the review. To all the readers if you have been reading up to this point you will continue to enjoy this series. I believe the author capitalized on the mystery of who Zach is. It does not fully explain everything, but it gives us enough that I can't wait to learn more. The conclave is exciting, and we learn a little about Dragon Politics and history.
I do wish some more answers were given in this book and the author explored the opportunities the conclave provided, but I can live with it. Without spoiling too much Zach finds the history of Dragons but the author doesn't just open the door he gives us only a piece of it. I look forward to what the author does next and how he builds the future of this story.
Writers are either planners or discoverers. To put it briefly the author is discovering the world with us. And I hope the author knows where he is going.
Read more
3 people found this helpful
Helpful
Report abuse

Andrew
4.0 out of 5 stars Needs to go on
Reviewed in the United States 🇺🇸 on September 3, 2022
Verified Purchase
I dont like that this is the end. There are to many loose ends. What happens with the church it's still out there. What happens with the succubus why was she even in the story. There is half a dozen other things that are left out
Read more
Helpful
Report abuse
See all reviews

Kindle Customer
5.0 out of 5 stars Bazzinga amazing
Reviewed in the United Kingdom 🇬🇧 on July 4, 2022
Verified Purchase
Holy crap on a cracker dude that was absolutely awesome I loved every page and only stopped because work got in the way of quality reading time I love this series and thoroughly enjoyed reading another amazing story I seriously can't wait for the next book many many many thanks Bruce for once again feeding my voracious overactive imagination 😁😁😁😁😁😁😁😁😁😁😁😁😁😁😁😁😁😁😁😁😁
Read more
Report abuse

Kindle Customer
5.0 out of 5 stars More fun, more girls, more enemies getting eaten
Reviewed in the United Kingdom 🇬🇧 on June 10, 2022
Verified Purchase
I could make this sound as though Zach is on some kind of weird culinary tour of the world, like Anthony Bourdain, but for dragons.
OK, so he is a dragon and has a huge appitite for food, gold and sex with the beautiful women in his harem, so that might not be too surprising, as he starts to learn what it means to be not just a dragon, but the king of dragons.
Read more
Report abuse

jacob
5.0 out of 5 stars Very well written
Reviewed in the United Kingdom 🇬🇧 on June 11, 2022
Verified Purchase
This is rapidly become one I'm my most Favorite book One of the things I liked about this book it shows the men it shows the mental side of the characters but I think it's really hard to write yet the author has done it yet the author has done it incredibly well
Read more
Report abuse

Tau Breaker
5.0 out of 5 stars Great
Reviewed in the United Kingdom 🇬🇧 on June 21, 2022
Verified Purchase
Another excellent entry in this series.
Read more
Report abuse