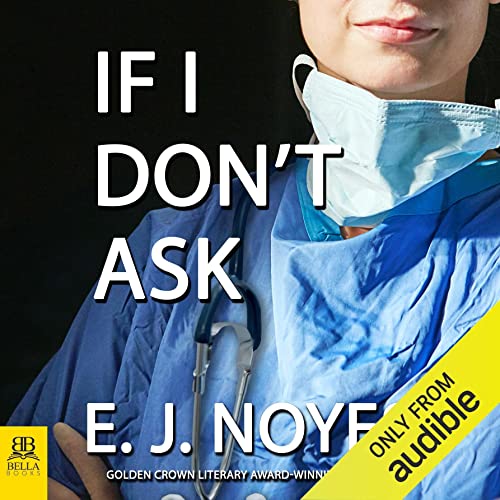 If I Don't Ask

Rebecca Keane has it all figured out. With a successful career as an Army surgeon and a fresh promotion to lieutenant colonel, she loves her life leading a surgical team. Even if that life means she’s spent years hiding her sexuality and ignoring her desires under the Army’s "don’t ask, don’t tell" policy. Then Captain Sabine Fleischer’s arrival sets off an attraction that cracks Rebecca’s carefully cultivated armor and brings about fresh complications.

As Sabine’s direct commanding officer, Rebecca knows she cannot act on her attraction, but that knowledge does nothing to squash her desires. Unable to keep her thoughts about the alluring other woman under control, Rebecca resigns herself to years of censoring her thoughts and feelings until Sabine’s time in the Army is done. She’s spent decades suppressing parts of herself for her job, so what’s a few more years?

But as Rebecca and Sabine work closely together on Army bases in Afghanistan and the States, the undeniable sparks between them begin to ignite. And despite Rebecca’s constant self-censure, her denials and her knowledge of every obstacle standing between them, her resolve crumbles with each passing day. But when the consequences of your love run deeper than just breaking one of the unbreakable rules of the military, you risk losing more than just your heart.

If I Don’t Ask is the must-hear story telling Rebecca’s side of E. J. Noyes’ best-selling Ask, Tell.

Your audiobook is waiting!
Learn more about Membership
List Price: $24.95
You Save: $2.96 (12%)
By completing your purchase, you agree to Audible’s Conditions Of Use
Sold and delivered by Audible, an Amazon company

Zoogirl
5.0 out of 5 stars The book I didn’t know I needed
Reviewed in the United States on May 29, 2022
Verified Purchase
Ask tell, was one of the first books I read and continues to be one of my favorites. EJ Noyes masterfully retells the story allowing you to experience all of the pivotal points through new eyes. It is rare that a book draws me in and make me want to hide away from all responsibilities and finish it in one sitting. As with the first book the chemistry is exquisite, and only EJ could make running into a wall be so sexy. This book does not disappoint and I’ll be reliving it all again in audiobook version next.
Read more
One person found this helpful
Helpful
Report abuse

Lee
5.0 out of 5 stars This book deserves a standing ovation
Reviewed in the United States on May 20, 2022
Verified Purchase
EJ Noyes is almost too good at making the reader of her books feel all the emotions her characters experience. I adore her humor that is very much underrated. I’m very appreciative of the level of detail from military protocol, to the nuances of the characters in conversation. If you want a spectacular love story about two women finding one another, buy this. I promise this book will stick with you.
Read more
3 people found this helpful
Helpful
Report abuse

Lynn Wray
5.0 out of 5 stars So good!!!
Reviewed in the United States on June 19, 2022
Verified Purchase
I don't usually get into the other side of a story...but I am so glad d I did for this one. We are back with Sabine and Rebecca, but this time getting Rebecca's side of the story. It was so well written! I couldn't imagine it any better!

Rebecca's life is flipped upside down from the moment she sees a photo of Captain Sabine. The struggle is real to be the CO and not make a move on all these desires. Further layered in this story is the theme of terminal illness and dealing with comforting from a long distance.

Michelle
5.0 out of 5 stars Amazing!
Reviewed in the United States on June 2, 2022
Verified Purchase
As expected this story was simply fabulous. I love EJ Noyes books. The connection, chemistry and love. I enjoyed Rebecca's view point after Ask, Tell. Now I have to reread Ask Me Again. I look forward to more books from EJ Noyes.
Read more
Helpful
Report abuse

Laura G.
5.0 out of 5 stars fabulous!!
Reviewed in the United States on June 12, 2022
Verified Purchase
Another fabulous book by EJ! I loved hearing the story through Rebeccas thoughts.while it’s the same “story” it don’t feel like it was a repeat. Highly recommend this book and author!
Read more
Helpful
Report abuse

Purplelilly
5.0 out of 5 stars Must read
Reviewed in the United States on June 14, 2022
Verified Purchase
Well written ..Hopefully there will be more books added to this series. Not once was a bored or skipped sections..
Read more
Helpful
Report abuse

Swker13
5.0 out of 5 stars The Best
Reviewed in the United States on May 29, 2022
Verified Purchase
Umm, yes. Please stop everything and start reading this book. The best lesfic I have read so far! The Best.
Read more
One person found this helpful
Helpful
Report abuse

CLG
5.0 out of 5 stars Another masterpiece
Reviewed in the United States on June 21, 2022
Verified Purchase
Every book by E.J. Noyes deserves five stars in my opinion and this one is no exception. I love the Ask, Tell series and was so excited to see this newest installment. It did not disappoint and I highly recommend this series to everyone.
Read more
Helpful
Report abuse
See all reviews

Snowflake
5.0 out of 5 stars Wow! Highly recommended, especially the audiobook narrated by Abby Craden
Reviewed in Germany on May 29, 2022
Verified Purchase
5 stars! I‘ve been in love with Rebecca Keane ever since I first read „Ask, Tell“, and I‘ve re-read Ask, Tell every year. And now having Rebecca‘s perspective of the story in part 4 of the series feels like a real treat. In my opinion, it‘s hand down the strongest book in the Ask Tell series, and undoubtedly my most anticipated book ever sonce I learned of its existence!

The story of „If I don’t ask“ is basically the same, just with a different focus and from a new POV. If you fear it might be too close to Ask, Tell don‘t worry, it‘s really not.

Freshly promoted Lieutenant Colonel Rebecca Keane has to discharge two of her team members of her surgical team because of adultery, and she is immediately attracted to one of the new additions to her team, Captain Sabine Fleischer. The Don‘t ask don‘t tell policy is still in place, and so Rebecca lives with constant remorse and self-censorship while trying to be a good leader.

Rebecca really is every bit as wonderful as I imagined. She‘s considerate, mature in her thoughts and communication, and all in all utterly adorable. I truly enjoyed how much she enjoys being a leader and how important good leadership is to her, and how she still shows her vulnerability. I could swoon every time she admonishes someone for "a word!?".
Her love for plants and her loving to do jigsaw puzzles was a nice addition, and I adored her friendship with Linda. It‘s very Rebecca, and also truly heartbreaking. If one thing was missing for me, I would have loved to see a bit more interaction with and feelings about her team, but it was only ever Sabine.

What I didn‘t really expect was the 2,5 years of pining, of longing for Sabine. How utterly delightful!
What I also didn't expect was her remorse about the incident. Another thing that was heartbreaking to learn.

I also liked to see how she saw Sabine. While I liked Sabine just fine before, I never really grasped her character, and so it was good to rediscover her through Rebecca‘s eyes.

This book is first person POV at its best. E.J. Noyes does this so well, but what we have here is really special. Due to shipment problems, I listened to the audiobook before I got my paperback copy. I knew it was going to be awesome, but this audiobook is.. just wow. „Ask, Tell“ was probably my very first Abby Craden book, and I‘ve loved her voice ever since. And yet, her voice in „If I don‘t ask“ is even better. Abby outdid herself and her Bec voice is truly something else. The whole book is such a sensual experience, with Abby‘s voice which is perfect for both Rebecca and Sabine.

Patrícia S.P.
5.0 out of 5 stars Old friends, new perspectives. Amazing reading all the same.
Reviewed in Brazil on June 28, 2022
Verified Purchase
It's so good to revisit old friends. I always wished we got to see Rebecca's POV, even if just a snippet of it, but thank fudge! E.J. regaled us with a full novel.

Knowing what was going to happen didn't diminish the experience at all, add to that a bad memory and it was almost like reading a "brand new" story [it is new, but you get the gist]. So it was really hard to put the book down, I've even dreamed that I was still reading the story when I fell asleep in the middle of it at the wee hours of the night.

Rebecca is such an amazing character and getting to see first hand her woes and afflictions related to her growing affection towards Sabine and her career just added to her depth and amazingness. Seeing how she threaded all the events was.. I don't even know how to put it. Then we have Linda and well, suddenly I'm sobbing, life really isn't fair to some.

And Sabine, even from someone else's POV is still a breath of fresh air, delightful. Now Imma put the #2 and #3 on my tbr again, because I'll just miss them if not.
Read more
Report abuse

KMiller
5.0 out of 5 stars Absolutely Incredible!
Reviewed in Canada on May 29, 2022
Verified Purchase
Loved this book, from Rebecca's point of view! EJ Noyes is a phenomenal writer! She makes you feel every emotion of the love that connects Rebecca and Sabine. The day this book was released, my partner gave me the look and said, pace yourself this time. I barrel through EJ's books then go into withdrawal. LOL! They are that good!!
Read more
Report abuse

Rhiannon
5.0 out of 5 stars best one yet
Reviewed in Australia on June 13, 2022
Verified Purchase
Didn’t think it could get better than my favourite ask, tell but it was. Love Rebecca and her love for Sabine
Read more
Report abuse
See all reviews