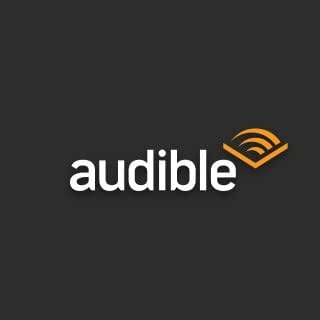 Audible 30-day free trial
Whether you're looking for entertainment, education, or inspiration - Audible has audiobooks for every passion.
Audible is $14.95/mo.
Cancel online anytime.

Discover stories that speak to you.

$14.95/month after 30 days. Cancel online anytime.
Give someone the gift of Audible membership

3.6 out of 5 stars
3.6 out of 5
4,569 customer ratings
How does Amazon calculate star ratings?
Amazon calculates a product’s star ratings based on a machine learned model instead of a raw data average. The model takes into account factors including the age of a rating, whether the ratings are from verified purchasers, and factors that establish reviewer trustworthiness.

Megasaurus
3.0 out of 5 stars Antiquated pricing/distribution
Reviewed in the United States on January 17, 2015
I love Audible and I hate it. If you are an audio book fan, they have the latest releases with the best narrators around. The quality is premium compared to their only real competitor, the library. However the pricing/distribution structure is antiquated and unacceptably high. I would be an enthusiastic booster for Audible if it ran on the newer model like Netflix or Spotify and allowed users access to ALL of its content for a subscription fee, rather than a monumentally high subscription fee for access to a single audio book. Audio books being the length that they are, no one could over use the service to excess and we'd all feel like we were getting a great deal. The current pricing/distribution structure is too cost prohibitive for anyone new to audio books to bother even trying them out, leaving this as an exclusive service to an exclusive audience with a dwindling population. The lack of a formidable competitor has turned this potentially awesome service into an overpriced monopoly.

For my own part, I've decided to save the $17 a month and queue up the digital selections that are available for free through my local library service.
Read more
7,079 people found this helpful
Helpful
Comment Report abuse

Summer Ela
1.0 out of 5 stars Kept charging my card even after I'd cancelled... download audio and ebooks free from your library instead :)
Reviewed in the United States on May 11, 2015
The service itself was actually great. Unfortunately, when I tried to cancel my membership, they charged my card one last time even though my month was ending days after I cancelled.

Our local library offers a service where you can download free audio books and listen to them on your phone, tablet, etc. I'd recommend saving your money and supporting your local library.
Read more
1,159 people found this helpful
Helpful
Comment Report abuse

Amazon Customer
1.0 out of 5 stars Unwanted trial membership...
Reviewed in the United States on February 1, 2019
Verified Purchase
Not only did I not ask for the trial membership but canceling loses any credits you have left immediately regardless of when you cancel in your subscription period. Not the sort of business model I care to do business with.
Read more
52 people found this helpful
Helpful
Comment Report abuse

C Hunt
1.0 out of 5 stars Beware of credit card charges
Reviewed in the United States on February 11, 2015
1 star because Audible.com charged my credit card 28 days into the 30 day trial and after I had already cancelled the trial. Charging a customer before the end of a trial is an unethical business practice and a gross misuse of credit card information.
Read more
3,657 people found this helpful
Helpful
Comment Report abuse

ALadyBoops
3.0 out of 5 stars Difficult to cancel.
Reviewed in the United States on June 27, 2018
Verified Purchase
The service itself is fine. We didn’t really use it very much as we use the local library more. The service was difficult for us to cancel through Amazon-however every time we called every representative was courteous and professional. They all did their best to assist us with canceling.
Read more
40 people found this helpful
Helpful
Comment Report abuse

Drewt107
1.0 out of 5 stars Beyond Disappointed
Reviewed in the United States on May 13, 2016
First off, let me say that I don't think I've ever actually written a public review of anything. Nor do I think I've ever had a negative thing to say about anyone Amazon offers. I consider myself as big an Amazon supporter as there is and regularly voice this opinion to anyone who will listen.

However, my experience recently with Audible has been beyond disappointing. I signed up for Audible almost two years ago during a time in my life where I had extended periods where I was able to listen to audiobooks. I really enjoyed the service and felt it was something I would use for quite some time.

Then, about a year ago I moved into a different position at a new company and simply don't have time to listen to audiobooks like I used to. When I called to cancel they told me I would lose my credits upon cancelling so they said they could place my account on hold. The limit, though, was three months. I said ok (figuring in three months I would have more time to listen to books).

Unfortunately this was no longer the case, and I of course forgot about the count restarting as active again after three months. So I started accumulating more credits and didn't even notice it until I received an email about my new credits. When calling to see if there was any was to keep my account active but not renewing until I could listen to the current credits, I was told no.

In today's digital age I can't think of a single reason why Audible would be unable to allow me access to those movies without my account renewing. I have an Amazon account. I paid for X amount of months membership with Audible which gave me X amount of credits. If I use listened to less than the total amount of credits I purchased, I should be able to keep these credits until a time in my life when I can use them, and I shouldn't have to pay monthly to keep them. If I cancel my Amazon or my Amazon Prime membership maybe I should lose them, but not for canceling Audible.

Not only is this the kind of incredibly frustrating money-grab that I would NEVER expect from a customer like Amazon, but it's also a terrible way of retaining customers and/or reactivating previously canceled customers. If I still had access to these credits, when the time comes in my life where I can listen to books, perhaps I use my six remaining credits and become hooked. All of the sudden I'm reactivating my subscription and will once again be a paying member. Now, however, I will never pay for another Audible subscription ever, regardless of my free time.

I hope Amazon's management and pride in the products/services they deliver to their clients can clean-up the disaster that is Audible.
Read more
127 people found this helpful
Helpful
Comment Report abuse

Jostaman
5.0 out of 5 stars Turned out to be a great investment
Reviewed in the United States on January 13, 2019
Verified Purchase
I like to use my time productively. Listening to nonsense on the radio is just not an option. I got offered a trial subscription at the Amazon store by Central Park NYC and it has turned out to be a great investment. If you have a bunch of kids, hold down a full time jobs, and are usually on the go, you will know how scarce reading time can be. So next time a knucklehead interviewer asks "What do you read"? You won't answer - "Manual's and docs @$%@! ". I didn't but honestly that ran through my mind - stupid question. At least with Audible I can get caught up on subjects of interest while on the move. It is a great investment.
Read more
7 people found this helpful
Helpful
Comment Report abuse

Grace C
1.0 out of 5 stars Deceiving
Reviewed in the United States on July 1, 2019
Verified Purchase
I feel like this was really deceiving. I went to an amazon bookstore about a month ago and when I was checking out, I was told I had a free audiobook. All I had to do was supply my email address connected to my amazon prime account. Anyways, I never claimed my audiobook and never thought audible again, until this week when I was living on a budget of $80 for 10 days and I saw my checking account drain by $15. Not only did I cancel my audible account, but I will also cancel my amazon prime account now because I could see this happening again with some other product or purchase.
Read more
9 people found this helpful
Helpful
Comment Report abuse
See all reviews from the United States