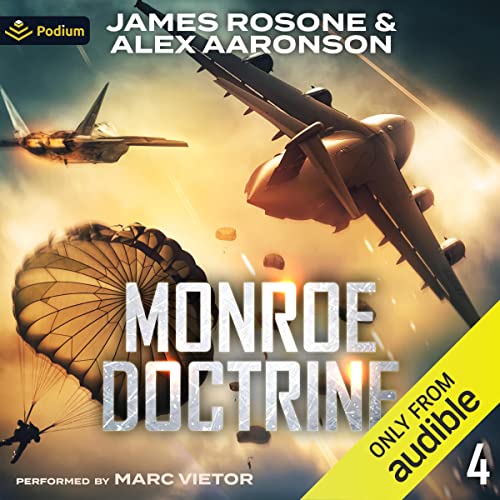 When she won the presidency, the world was in crisis. Would Blain be able to maintain her trust at this crucial hour?

The Chinese were driven out of the Caribbean, but Blain knew it was at a terrible cost. There were those in the administration that had lost their nerve. The president was determined to slay the Jade Dragon, but would he be able to get her what she needs to win?

A divided cabinet threatens everything. Is the political pressure too much?

The Japanese have stepped up. They’ve deployed forces to the mainland, but is it too little too late to make a difference? A massive Chinese army seeks to divide Russia in two and break the supply lines. One Italian artilleryman fights to stay alive. If he can just get into position, he’ll call in the strike, and the Chinese won’t know what hit them. It could be the break NATO needs, but the odds are against him.

The most dangerous front is on the airwaves.

With socially engineered deepfakes and propaganda sowing the seeds of distrust across the globe, the tech giants are at the center of it all. Can they be stopped? Will freedom of speech be lost, and with it, all hope?

Includes a special note from the author.

Your audiobook is waiting!
Learn more about Membership
List Price: $39.99
You Save: $5.00 (13%)
By completing your purchase, you agree to Audible’s Conditions Of Use
Sold and delivered by Audible, an Amazon company

Jeremiah S.
5.0 out of 5 stars Another hit sure to keep you in suspense.
Reviewed in the United States on March 23, 2022
Verified Purchase
The suspense just keeps killing me! New Death Drones, Laser weapons and AI methodology. Now that the war in the southern theater is wrapping up, things are just heating up in the East and in Russia. Not only is the AI taking matters into "His" own hands but at a cold and methodical pace. Can America catch themselves up to this new threat and move away from the "tried and true" tactics to throw this AI off balance or does the AI have them pegged with the same old war tactics that have always been? And then there’s the submarine warfare! It’s awesome. And you can’t help but think this will be the real future of submarine warfare in the not too distant future for our own military.

The Authors have continued to keep me on the tips of my toes and Now I have to wait until the next book to find out what happens next!
Read more
2 people found this helpful
Helpful
Report abuse

Lewis Steele
5.0 out of 5 stars By far and above the best future war series.
Reviewed in the United States on January 31, 2022
Verified Purchase
I look forward to every single new book this author puts out. You will not find another future war series that is this accurate and detailed. My favorite thing is how detailed the author gets with the different war machines and action scenes without getting to carried away with technical specs like some authors do. This is really a review of the entire series along with their other series and i cannot recommend them though. You will be hooked and waiting for the next book!
Read more
One person found this helpful
Helpful
Report abuse

Carl Clause
5.0 out of 5 stars CC 1
Reviewed in the United States on May 15, 2022
Verified Purchase
Another excellent read in continuing saga of China AI versus the world. Definitely some relevant things going on today between the world and Russia. The president Definitely shook up the old democracy. She trying to Trump the way of doing things so AI can't predict what her next moves are . Definitely 10 stars 🌟 plus!!!!! Thanks Carl Clause
Read more
One person found this helpful
Helpful
Report abuse

Kindle Customer
5.0 out of 5 stars The action steps up a notch
Reviewed in the United States on February 17, 2022
Verified Purchase
Great follow up to book three. Now we are starting to roll and realy catch on to why we were getting our butts kicked.
Been a great read and have been waiting to get into book number
Five
Read more
One person found this helpful
Helpful
Report abuse

Scott & Kristina Conner
5.0 out of 5 stars great series, well written, can’t wait for the next book!
Reviewed in the United States on February 16, 2022
Verified Purchase
This series is nicely written. Characters and scenarios are very realistic. Incredibly entertaining. Can’t wait for the next book!
Please keep up the good work
Read more
One person found this helpful
Helpful
Report abuse

nino2140
5.0 out of 5 stars Stunning as usual
Reviewed in the United States on February 8, 2022
Verified Purchase
Another excellent story that convinced me how far out of date I really am!
You folks are totally amazing and I'm always interested in your details.
Read more
One person found this helpful
Helpful
Report abuse

S David Long
5.0 out of 5 stars Ditto for IV
Reviewed in the United States on March 21, 2022
Verified Purchase
This book, just like those before it, just keeps getting better and better. The attention to detail in all areas speaks well of the vast amount of research the goes into each book. Ready t move onto V.
Read more
Helpful
Report abuse
See all reviews

Mark C
5.0 out of 5 stars And that train keeps on rolling...
Reviewed in the United Kingdom on January 23, 2022
Verified Purchase
With Book 4, the war continues to develop, as the tide starts to turn on China, but they continue to make inroads in some areas. The allies start finding ways to blunt Jade Dragon's plans, but at home things start to become worrying as politics rears it's ugly head.
The allies work to blunt China's efforts, with "The enemy of my enemy is my ally" becoming the new watchword in Europe. In the Pacific, shocking action changes the balance of power and shocks people across the world, and allies come out to fight against China's continued willingness to do whatever it takes. But not everything goes the Allies way, and there os more work, and more sacrifices, to come.

As usual, the Monroe Doctrine is full of action across multiple theatres of conflict, and reminds us that sometimes we may not want to fight, but the alternative may be even more unpalatable.... A great read that kept me hooked all the way to the end.
Read more
Report abuse

Kindle Customer
5.0 out of 5 stars Wow
Reviewed in the United Kingdom on May 15, 2022
Verified Purchase
Wow,fast paced. Hopefully this would never happen. Then who thought a so called "civilised" nation would attack & try to obliterate it from existing . Some things should remain fiction. This is one of them. If you have a fascination with a twist on the modern political world,sprinkle in a little sci fi , throw in some fast military action, boom. Fast paced & an epic page turner.
Read more
Report abuse

Winston Woolff
5.0 out of 5 stars Keep 'em coming please!
Reviewed in the United Kingdom on February 6, 2022
Verified Purchase
Once again a tour de force showing the possible and likely horrors of future war. The reader just gets to know a character and empathise with him/her when "bang!" that character is gone. That, more than anything else, demonstrates how horrendous war can be. Brilliantly written and despite all of the death and destruction, totally gripping (for me at least).
Read more
Report abuse

Colin Ford
5.0 out of 5 stars Ww3
Reviewed in the United Kingdom on April 14, 2022
Verified Purchase
Have readable ww3 books and empire rising series and proje t 19 series all were excellent and this book was no different. D ETAIL IS GOOD WITHOUT GETTING BOGGED DOWN WITH TRIVIA characters are very believable cannot wait for next book.
Read more
Report abuse

David Embleton, writer of The Last Man Standing series.
5.0 out of 5 stars As usual brilliant book
Reviewed in the United Kingdom on February 4, 2022
Verified Purchase
Taking the war to the Chinese in a monumental clash of arms.
The research and gaming that must have gone hand in hand with the story is amazing.