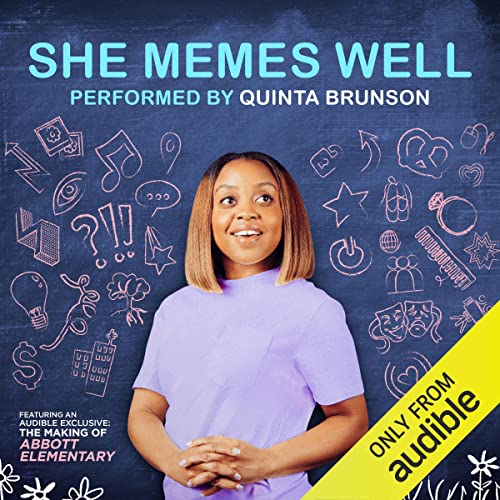 Features an Audible Exclusive: The Making of Abbott Elementary.

“In She Memes Well, Quinta gives more than a peek behind the curtain. She invites us in, lets us poke around and offers a balm for our aching souls. She moves beyond the jokes into something much deeper, something we may not recognize we need. She is the friend, sister, lover, cool co-worker we all wished we had.” (Gabrielle Union, actress and New York Times best-selling author of We’re Going to Need More Wine)

From comedian Quinta Brunson (creator and star of Abbott Elementary) comes a deeply personal and funny collection of essays about trying to make it when you're struggling, the importance of staying true to your roots, and how she's redefined humor online. This special Audible edition includes never-before-heard details about the making of Abbott Elementary, the cast, the writers' room, and how the show inadvertently created hundreds of new roles for young Black actors.

Quinta Brunson is a master at breaking the internet. Before having any traditional background in media, her humorous videos were the first to go viral on Instagram’s platform. From there, Brunson’s wryly observant POV helped cement her status in the comedy world at large, with roles on HBO, Netflix, ABC, Adult Swim, BuzzFeed, the CW, and Comedy Central. Now, Brunson is bringing her comedic chops to the page in She Memes Well, an earnest, laugh-out-loud collection about this unusual road to notoriety.

In her debut essay collection, Quinta applies her trademark humor and heart to discuss what it was like to go from a girl who loved the World Wide Web to a girl whose face launched a thousand memes. With anecdotes that range from the ridiculous—like the time she decided to go clubbing wearing an outfit she describes as "Gary Coleman meets metrosexual pirate"—to more heartfelt material about her struggles with depression, Quinta's voice is entirely authentic and eminently enjoyable. With its intimate tone and hilarious moments, She Memes Well will make you feel as if you're sitting down with your chillest, funniest friend.

Your audiobook is waiting!
Learn more about membership
List Price: $29.95
You Save: $3.96 (13%)
By completing your purchase, you agree to Audible’s Conditions Of Use
Sold and delivered by Audible, an Amazon company

Amazon Customer
3.0 out of 5 stars Not disappointed but not surprised either!
Reviewed in the United States on May 11, 2022
This book was a solid read. However, there were many moments in the book where it read more like a gossip column than it did a book.I felt disconnected from this book, even as a black person that grew up in predominantly black environments. Her stories about her youth and her family were a bright spot, but at times it felt like she was grasping for straws.There were several bright spots, several moments where I felt the humor on the stories, moments where I actually laughed out loud and not just in my head or a small chuckle.But those moments were often few and far in between. Leading me to rate this book at only 3⭐️. I wouldn’t say I was disappointed, but I will say I wasn’t surprised either.
Images in this review

Andrea
5.0 out of 5 stars So good it’s more than reading
Reviewed in the United States 🇺🇸 on November 26, 2022
Verified Purchase
I don’t even read. The last book I read was 5 years ago. Quinta writes in such an authentic and encapsulating voice that you feel like you’re listening to a friend tell funny stories. It’s a great book that I would recommend to anyone! Quinta fans and Abbot Elementary fans will absolutely love reading this!
Read more
Helpful
Report abuse

Nenia Campbell
TOP 500 REVIEWERVINE VOICE
5.0 out of 5 stars I LOVE QUINTA!
Reviewed in the United States 🇺🇸 on January 5, 2022
Verified Purchase
Even though it has its problems, I love BuzzFeed. I've been watching it for almost ten years and some of the recurring people on it almost feel like friends (even though they're totally not). I've even followed some of my faves onto different channels and platforms, like Safiya Nygaard or the Kitchen and Jorn Show. And if they write books, I totally buy them. So obviously this meant that when I found out that Quinta was releasing a book of her own, I was like YAAAAAASS.

Quinta's first BuzzFeed video was the International Doritos Taste Test, where apparently she was just a guest of Justin's (although she joined the team shortly after). This is just one of the facts you will learn about Quinta while reading this memoir. I also had no idea that she was internet famous even before BuzzFeed, because apparently she did a short comedy video called "He Got Money" from this sketch she did about a girl who's never been on a nice date.

SHE MEMES WELL touches on so many topics, and all of them work. You learn about her Jehova's Witness background, her thought on Black hair (and all the work that goes into it). She talks about working in the Apple store prior to doing comedy and how she ended up having to go back to the Apple store before finally making it big in comedy. She talks about not getting involved in internet drama and how it's hard being a woman and especially a woman of color on the internet. She talks about Black Lives Matter and how she had a cousin who was shot, which made her stakes in the movement extra extra personal. She talks about loving yourself and loving other people (be it romantic relationships or family) and about some of her favorite media that have inspired her, be it video games, books, music, or movies. I would honestly read an entire book where she just writes essays on her favorite movies, like Lindy West did with that one book S***, ACTUALLY.

After finishing this book, there really wasn't much else to say. I loved the randomly interspersed photographs, her outlook on life, and how she always tries to keep it real. I know a memoir is A+ if by the time I have finished reading it, I find myself wishing that the author was my friend. She was one of my favorite personalities on BuzzFeed and I'm glad she's doing well at staking it out solo, too.

Debbie McNulty
4.0 out of 5 stars Quinta' s Book
Reviewed in the United States 🇺🇸 on September 22, 2022
Verified Purchase
I gave "She Memes Well" 4 stars because great books deserve 5. Quinta' s Book is very good and several parts made me chuckle out loud. And many parts of the book were heartfelt and thought-provoking. I love her personality and was thrilled when she won an Emmy for "Abbott Elementary".
Read more
One person found this helpful
Helpful
Report abuse

TmG
5.0 out of 5 stars Smart, hilarious
Reviewed in the United States 🇺🇸 on August 22, 2022
Verified Purchase
Comedian/actress/writer/ sitcom creator Quinta Brunson takes you on a heartfelt and hilarious journey beginning with her Philly childhood through to her years in LA. This is a great book about perserverance for creatives and for anyone with a dream trying to make something from the ground up. She finds the comedy in a strict childhood upbringing, dating in LA, Apple store shenanigans, all contributing to her years in comedy. Looking forward to her next decades of observations!
Read more
One person found this helpful
Helpful
Report abuse

Kathryn Burgess
4.0 out of 5 stars Awesome
Reviewed in the United States 🇺🇸 on June 2, 2022
Verified Purchase
I have always loved her videos and content online. Nice to hear the story of someone so relatable. I root for her always!
Read more
Helpful
Report abuse

Prada828
5.0 out of 5 stars Up and Coming Superstar!
Reviewed in the United States 🇺🇸 on July 24, 2022
Verified Purchase
After reading this book Ms. Brunson really made Me laugh. It was like reading about My own fun Family. I Am Quinta Brunson's New Big Fan. Go get em Sister!!!
Read more
One person found this helpful
Helpful
Report abuse

Weekend Reader (Lynell)
4.0 out of 5 stars A journey
Reviewed in the United States 🇺🇸 on February 3, 2022
Verified Purchase
I think if you picked up this book for laughs you will miss out on the things that make Quinta a performer. Essentially she takes her us on a journey of she became internet famous aka she memes well. I really appreciated how she described where and how she draws inspiration and it's literally from her family, friends, and experiences. She also shares wisdom on what has kept her grounded and areas she sees still working through. I really appreciated her insights and this book was so unexpected.

Paul
5.0 out of 5 stars Brilliant
Reviewed in the United States 🇺🇸 on June 3, 2022
Verified Purchase
I love Abbott, it feels so totally real life. But I really learned a wealth of new knowledge about the many layers of social that knock up against each other. Thank you Quinta for schooling this confused baby boomer, and thank you for your brilliance.
Read more
Helpful
Report abuse
See all reviews