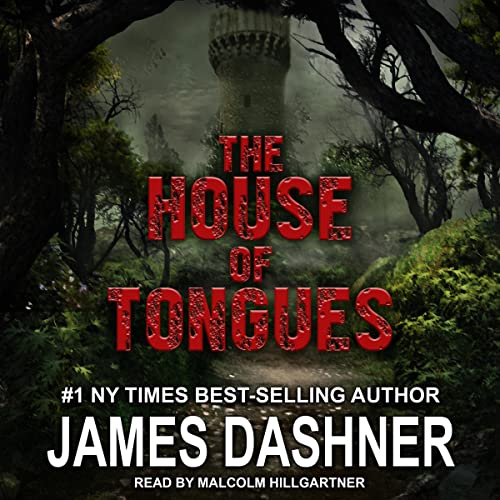 The House of Tongues

The author of the New York Times best-selling Maze Runner series leads us on a dark journey of generational horror as we visit The House of Tongues.

David Player has spent 30 years trying to forget the traumas of his childhood. The threats, the kidnappings, the murders. The imagined curses of a people born centuries earlier, passed from father to son, mother to daughter, generation to generation. Its climax came in human form, a monster of a man, one of the most notorious serial killers the nation has ever seen: Pee Wee Gaskins. And Gaskins had a particular hatred for the Player family, then for David, himself, who barely escaped those years with his own life intact.

Now David is back, his four children in tow, visiting his parents' home, a place he has learned to cherish despite the evils that haunted his younger days. But no sooner does he return than a stranger visits their doorstep, the son of Pee Wee Gaskins. In a terrifying display, right in front of the kids, the man utters threats until he chokes on his own tongue, sparking a series of events that drag David and his family back into the days of curses and murders, onto a path of unimaginable terror. That path leads to an old gothic tower in the woods, a place David had blocked from his memory, a house of horrors both past and present. The House of Tongues.

Enjoy a free audiobook + more
Learn more about Membership
List Price: $20.99
You Save: $2.62 (12%)
By completing your purchase, you agree to Audible’s Conditions Of Use
Sold and delivered by Audible, an Amazon company
Share

4.3 out of 5 stars
4.3 out of 5
22 global ratings
How are ratings calculated?
To calculate the overall star rating and percentage breakdown by star, we don’t use a simple average. Instead, our system considers things like how recent a review is and if the reviewer bought the item on Amazon. It also analyzes reviews to verify trustworthiness.

Kent Player
5.0 out of 5 stars A wild ride
Reviewed in the United States on October 22, 2021
Verified Purchase
Fast paced and exciting story. Unexpected twists and turns till the very end. The language puts you squarely in the environments of the characters.
Read more
2 people found this helpful
Helpful
Report abuse

Jeanna
3.0 out of 5 stars House of Tongues is a thrill for the imagination.
Reviewed in the United States on November 21, 2021
This book was written by the author of The Maze Runner…yes I said that correctly. chock full of serial killers, kidnappings, deep south traditions, and strong family bonds.

David is a widowed father of four just trying to keep his life going and keep his children happy and healthy. He has not only endured the loss of his beloved wife but has suffered so much trauma in his past that it’s a wonder he can get out of bed at all. Thirty years earlier as a teenager David and his best friend Andrea were tortured, kidnapped, and almost killed by an infamous now dead serial killer. Although he has worked through most of the events that happened he knows that something’s buried should always stay that way. When visiting his parents back in the small town where he grew up and all of his heinous memories occurred it seems that what was in the past has come back.

I really enjoyed this dual-time lined story, he has a way of developing these characters so well that I could imagine everything so perfectly. Each chapter jumping back and forth from his past horrors to the present ones. I loved the descriptions of the area where he lived as I have never visited the Carolina’s I was unfamiliar as to how swampy some areas actually were.

I will admit that it did take me a good while to get into the story, for some reason at the beginning I felt like it just jumped around so much I couldn’t tell what was always happening. Once things started to focus in and really get down to the business at hand I was hooked. I didn’t put it down from about 30% in until I had finished it. I love when stories are set up in a way that you just have to know what is going to happen to the characters. I can’t wait to recommend this book to my horror book fans and will definitely be quick to caution anyone on eating during the ending of this book :)

Thank you so much to NetGalley and Riverdale Avenue Books for this ebook in exchange for my honest review.
Read more
2 people found this helpful
Helpful
Report abuse

Buzy_reading
2.0 out of 5 stars Strange things happen in the swamps
Reviewed in the United States on November 13, 2021
It all began at the age of seven when David met a man with a shovel and a hearse. Then at sixteen David was followed by a serial killer after witnessing him in the woods. From that moment going forward the killer had a sick interest in David. There’s a serial killer loose who’s playing mind games with David, the sixteen year old witness. After thirty years, David and his four children are in harms way when he comes back to visit his parents.

This is a dark horror story. For some unknown reason I was in disbelief about the things David witnessed. For this reason the story didn’t live up to what James plotted.

I wanted to like this story, but I was confused trying to understand what James Dashner was trying to communicate to the readers. I think the idea of this book got the better of him because it read like it was difficult to describe what he was trying to convey to readers. Seems like the idea was too big to put into words. This was a wordy story with much to say, yet saying too much.
The story alternates between the sixteen year old David and the forty year old David. As each chapter is written and read the reader simultaneously is given pieces of the puzzle.

The story doesn’t necessarily follow the life of a serial killer nor does it follow a procedure of investigation. It’s simply not that type of story. It’s a grueling tale of darkness that involves David and Pee Wee. As quickly as the scare between David and Pee Wee started it also ended until thirty years later when his son starts where his father ended.

James Dashner set out to write a horror story about a serial killer who dumps bodies in Pudding Swamp. David was sixteen when he witnessed Pee Wee Gaskins severing the head of a man. As the story alternates between the sixteen year old David and the forty-six year old David the reader learns more about this man who worked at the mortuary and the impact of what David encountered as a young adult. Thirty years later David brings his four kids back to the place where his nightmares began. The horrors continue as David is once again faced with trauma in the swamps.

James conjured up dark words, yet when combined with other words they lost that scary grueling feeling. His words didn’t evoke any sense of fear in me. I read the dark grueling words just as I do any other word but it didn’t have the desired affect.

James set out to remind David of his memories one chapter at a time. As the memories came flooding back the reader gets to fit the puzzle pieces together. The darkness remained buried inside these characters for thirty long years until David’s oldest son turned sixteen. I didn’t buy into this grueling tale. I kept hoping it was all a ruse. Not to mention David wasn’t hindered by any of these nightmares as a teenager. He too carried on in life as if what he witnessed was some illusion. Fir this reason it just didn’t scare me.

James Dashner is the best selling author of The Maze Runner series. I for one read those books as well as watched the movies. While I enjoyed his writing voice in that series I didn’t find the same writing style in The House of Tongues.
Read more
One person found this helpful
Helpful
Report abuse
See all reviews
Back to top
Get to Know Us
Make Money with Us
Amazon Payment Products
Let Us Help You
EnglishChoose a language for shopping. United StatesChoose a country/region for shopping.
© 1996-2022, Amazon.com, Inc. or its affiliates