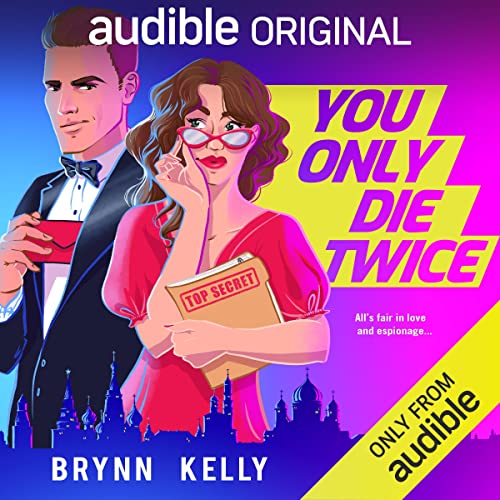 You Only Die Twice

Danger and desire collide in this romantic thrill ride—available exclusively in audio!

When high school English teacher Alice Thornton helps her dying Russian neighbor write a spy thriller, she thinks she’s just doing a good deed. But when a sexy mystery man shows up in her classroom, claiming to be the novel’s dashing antihero, Alice is swept into a lethal conspiracy.

Enigmatic former CIA operative Carter Beck warns her that the sensational murder plot wasn’t fiction. And because she knows too much, the killer wants her silenced—making Carter her only hope of survival.

Forced on the run, Alice and Carter must separate truth from fiction to unmask the murderer before they become the next victims. The danger is only too real—and so is their unexpected chemistry. In between motorcycle chases, dodging bullets and unraveling clues, the unlikely pair start to wonder if the secret to their survival might just be each other....

Enjoy this audiobook free + more
Learn more about membership
List Price: $34.95
You Save: $4.37 (13%)
By completing your purchase, you agree to Audible’s Conditions Of Use
Sold and delivered by Audible, an Amazon company

Andy
5.0 out of 5 stars Awesome Story
Reviewed in the United States 🇺🇸 on October 30, 2022
This was a fun story but with some really heartfelt moments. Basically, it is about a teacher, Alice Thornton, who cowrites a spy novel only to find out later it was a real story, when the love interest from the book, Carter Beck, surprises her in her classroom. That begins an adventure where they try to clear Beck's name while avoiding sleeper agents and the C.I.A. I had a good time with this book and smiled quite a few times. It also deals with heavier subjects like terminal illness and the process of grief and letting go. I really loved this book and wish it was available to buy a physical copy because I would totally do so.
Read more
One person found this helpful
Helpful
Report abuse

J. Nelson
5.0 out of 5 stars So good!
Reviewed in the United States 🇺🇸 on November 3, 2022
Loved it! Super creative and engaging! My only hang up was that I think the audiobook would have flowed better in first person POV. But really, it was brilliant! A great closed door romantic suspense!
Read more
Helpful
Report abuse

sue
5.0 out of 5 stars Couldn't shut it off.
Reviewed in the United States 🇺🇸 on August 31, 2022
I had a super long road trip today (13 hours) so set this book up and started listening. From start to finish, I was swept away with the action, intrigue, and quirky characters. The dual narration was nice (though wasn't crazy about how the male did the female voices) and really enjoyed the female narration of everything.
The story is filled with espionage, suspense, and high-adrenaline romance. The romance is very quick (just a few days) but the author did a believable job of showing us how these two really connected in such a short time. I loved the side characters, though if you've lost someone recently due to cancer (Like I did) there might be some tears. But it was still done very well. I've read all of Brynn Kelly's other suspense novels and really enjoy her writing style.
Read more
One person found this helpful
Helpful
Report abuse

The heroine: Alice Thornton - She is a high school teacher and her day just went from bad to worse. It started out when she went to her car during a break between classes, only to find that it was the object of the senior prank and the students put it in a place she couldn’t drive it out of. Two minutes later she gets served by someone suing her for defamation for a character in the self published fiction novel she wrote along with a friend. To round out her awful day, she finds a heartthrob in her classroom who thinks he is the anti-hero, Anderson Holt, a CIA agent from her novel and he tells her she is in danger.

The Hero: Carter Beck - He is an ex-CIA agent and handler to a Russian agent who was feeding intel directly from the Kremlin. That agent was Nika, the same friend that Alice co-wrote her book with. The Russian woman was dying of cancer when she wrote the book and died before the book was complete.

The Story: Carter has been framed for the murder that was the plot in the book, because though much of the book was based on real people and facts, some of the story and the ending were completely made up by Alice when her friend got near death and could no longer give her input. Alice never thought the characters and storylines Nika gave her were real. Now it seems that the real killer is framing Carter based on the fact that Alice made him the killer in the book.

The book was told in dual points of view via dual narration. The narration was done by Alan Carson and Stasia Newcomb. They did a great job and both have very pleasing voices. I really liked the premise of this one and I liked the characters. I just thought that the plot was too overly complicated. I didn’t like all the flashbacks to Carter and Nika and their relationship and missions together. I think it would have been a lot better if the plot stuck to the danger Alice was in and that whole aspect of the plot.
Read more
2 people found this helpful
Helpful
Report abuse
See all reviews