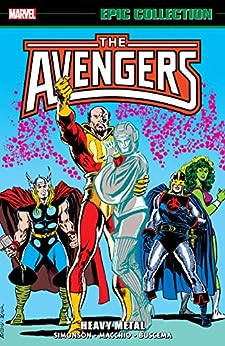 The old order really changeth! The Avengers are pushed to their limits — first by all-out war against the Super-Adaptoid and his android army then by the monstrous mutation of Marrina, Namor’s wife! It ends in heartbreak for the Sub-Mariner, torment for the Black Knight and anguish for Captain Marvel — giving Doctor Druid his moment to take control. But what is Druid’s secret agenda? Who is the beautiful woman in his dreams? And what does it all have to do with Kang the Conqueror? The answers will leave the Avengers in shambles — meaning Jocasta must recruit a crew of reserves to fight the Evolutionary War! But out of the ashes of the X-Men’s “Inferno,” a new team rises — and Mister Fantastic and the Invisible Woman will answer the cry of “Avengers Assemble!”
Read more
Previous page
Next page
Read this book on comiXology. Learn more
Kindle e-Readers
Fire Tablets
Free Kindle Reading Apps
Available on these devices

Audible Holiday Deal
Join Audible Premium Plus for 60% off. Only $5.95 a month for the first 3 months. Get this deal
Books In This Series (61 Books)
Complete Series 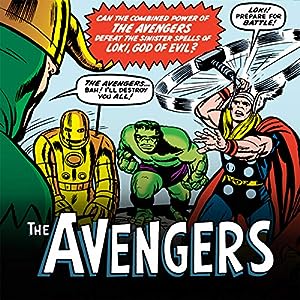 4.7 out of 5 stars
4.7 out of 5
88 global ratings
How are ratings calculated?
To calculate the overall star rating and percentage breakdown by star, we don’t use a simple average. Instead, our system considers things like how recent a review is and if the reviewer bought the item on Amazon. It also analyzes reviews to verify trustworthiness.
Top reviews

J. Reeves
4.0 out of 5 stars Interesting collection.
Reviewed in the United States on December 12, 2020
Verified Purchase
My first comic ever was Avengers 300. So this collection is a neat treat for me. This might be one of the weakest Avengers runs ever as it's a bit of an adjustment period after Roger Stern's excellent run...but the art is gorgeous.
Read more
4 people found this helpful
Helpful
Report abuse

Amazon Customer
5.0 out of 5 stars John Buscema Avengers
Reviewed in the United States on November 29, 2020
Verified Purchase
Been waiting a long time for this one and it doesn't disappoint. Buscema's rendition of Namor is on full display here. And the high quality paper really bring out the art. Dr. Druid's dream sequence of being the conventional hero is a funny highlight of this book. Great visual story-telling.
Read more
2 people found this helpful
Helpful
Report abuse

K
5.0 out of 5 stars Boyfriend likes it
Reviewed in the United States on February 11, 2021
Verified Purchase
My boyfriend likes it.
Read more
One person found this helpful
Helpful
Report abuse
See all reviews

Temple Phoenix
4.0 out of 5 stars Earth's Mightiest Mess, But Wonderful Art
Reviewed in the United Kingdom on December 9, 2020
Verified Purchase
Volume 18 of the Avengers Epics largely deals with the fallout after the loss of Roger Stern, possibly the Avengers' greatest ever writer, after he was fired over a disagreement with editorial over the proposed direction for the team. The also rather great Walter Simonson jumps on for a time, but he also does not last that long, and both before and after his tenure, it's all a bit of a mess.

Storywise, it deals with Dr. Druid's slow corruption by a mysterious femme fatale, and the sequence of events that leads to the dissolution of the team. The volume wraps up with the book's part of the X-crossover Inferno, ending with a new lineup that (however brief) was at least interestingly different. You can tell that Avengers was a book looking for a direction during this period, and coming off such a well-regarded run, it can't help but suffer in comparison.

Luckily, for most of the issues here, we have the wondrous art team of John Buscema and Tom Palmer, who give even the least inspiring material an exciting, dynamic look. And it's not as if there are no good issues contained here storywise either; in particular, one revolving entirely around Avengers butler Jarvis is fantastic stuff.

Extras include a Marvel: Portraits of a Universe pinup, a Simonson interview from Marvel Age, and a new afterword by editor Ralph Macchio. It's a bit of a muddled volume that mostly acts as a bridge between two eras, but certainly there is plenty to enjoy here for Avengers fans, particularly that wonderful art.
Read more
3 people found this helpful
Report abuse

Stevie T
5.0 out of 5 stars Dr Druid goes berserk!
Reviewed in the United Kingdom on December 18, 2020
Verified Purchase
One of my absolute favourite runs. Shame it was curtailed.
Read more
One person found this helpful
Report abuse

Lisandro Gaertner
3.0 out of 5 stars Nostalgia is not enough
Reviewed in Brazil on May 4, 2021
Verified Purchase
I remember reading these titles when I was a kid and liking it very much. 30 years after, it is good to know my taste got better. It is not bad, but it is a regular comic from the 80s and nothing more. You don't cross the same river twice. The comics are the same but I changed.
Read more
One person found this helpful
Report abuse
See all reviews