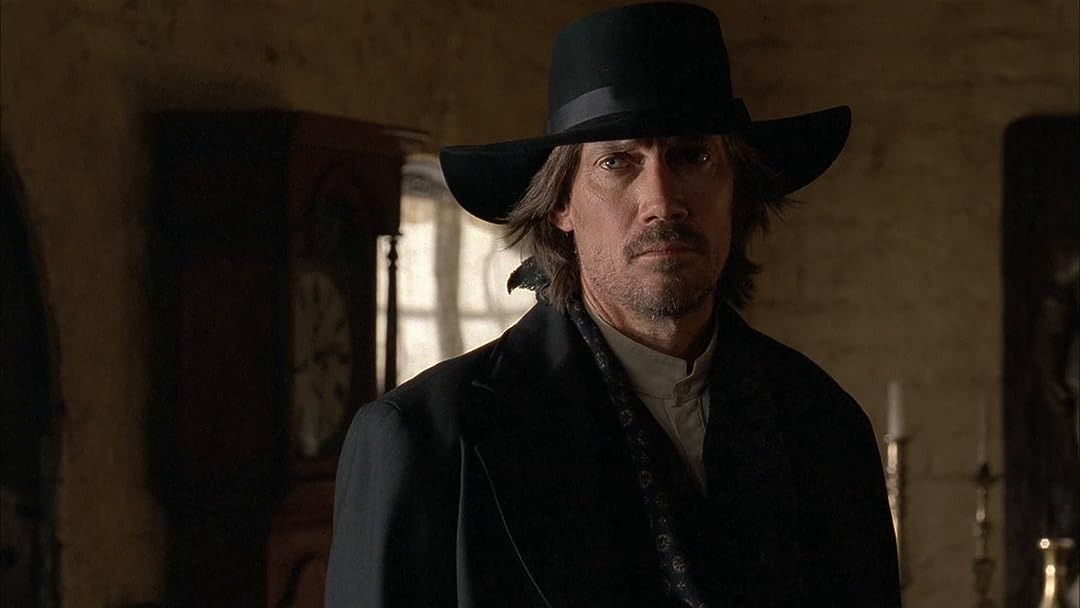 (119)
5.41 h 20 min2007PG
After a small church is bombed in the Wild West post-civil war, a former preacher turns bounty hunter to avenge the deaths of his wife and child. Viewer Discretion Advised. TV-PG-DV

R. SorrowReviewed in the United States on November 16, 2007
5.0 out of 5 stars
Kevin Sorbo's best performance ever!
Verified purchase
Without question,Kevin Sorbo gave his best performance ever in this story of a preacher torn between his faith and his desire for vengence after losing his wife & daughter at the hands of a greedy landbaron's henchmen. This movie will remind you of many of Clint Eastwood's westerns,most notably Pale Rider. As the Preacher grapples with his decision,into his life comes Maggie,a former saloon girl and her young daughter,Amelia. They remind him of what he lost and through the goodness he sees in them,he begins to see the goodness in himself. A wonderful movie for anyone who loves a good western. The dvd extras(an interview w/Sorbo and a featurette on the making of the General Store scene)are wonderful and the packaging is very nice. The only complaint I would have is the lack of deleted scenes,which would have put a new dynamic on the relationship between Maggie & The Preacher. However,that is a minor thing and overall,I absolutely love this movie!
25 people found this helpful

Jan MiedeckeReviewed in the United States on October 29, 2008
5.0 out of 5 stars
Avenging Angel with Kevin Sorbo
Verified purchase
If you love action, love story and a movie with justice, then you will really fall in love with this one. Kevin Sorbo is great again as usual. There is so much plot to this movie. The interaction with this little girl is wonderful. I would recommend this to anyone liking westerns, family togetherness and action to purchase this one. I love Kevin Sorbo. I have every movie he has made. Another great one is Walking Tall and the sequel with him. The first one with "the Rock" was also good, but the 2 follow up movies with Kevin Sorbo are super. Also, Prarie Fever is another one in my library. Again with KS. Enjoy, I know I do over and over again!
4 people found this helpful

UnbesiegbarReviewed in the United States on November 26, 2007
5.0 out of 5 stars
Kevin Sorbo is back!!
Verified purchase
Avenging Angel is a western movie with a preacher who seeks justice for the untimely murder of both his wife and daughter. Kevin Sorbo (the preacher) manages to show emotional range and change his appearance to reflect his inner struggle to cope with his loss.
The supporting cast consists also does a fine job of displaying acting talent. This movie is simple, yet spectacular. The low budget does not impede the director from delivering one of the best made for television movies that I have seen in years! Good costumes, good location to create a western movie, and amazing acting is what Avenging Angel has for its viewers. Kevin Sorbo alone warrants a star. In fact, this is one of his best movie roles to date.
I rate Avenging Angel a 5 star movie. This will be a classic! Very well done-

Becki MerrittReviewed in the United States on February 19, 2015
5.0 out of 5 stars
Avenging Angel - Kevin Sorbo
Verified purchase
Kevin Sorbo is one of my most favorite actors, and so far this is definitely my favorite movie of his. I love westerns as apparently does Kevin being he makes his form of 1800's justice so real in how he deals with personal loss and justice for both the corrupt and their targets. Good movie for older family members, but may be a little over the top for young children.
2 people found this helpful

Jack.Reviewed in the United States on September 9, 2020
5.0 out of 5 stars
Not to bad.
Verified purchase
The movie isn't to bad. It is worth the watch. I wish I had rented it instead of buying it though.

Mara Lucia GiangiardiReviewed in the United States on September 4, 2007
5.0 out of 5 stars
Great performance
Verified purchase
Kevin Sorbo gives enrichment to western genre, as he did in Hercules for adventure genre. He does an amazing job as the Preacher. it's refreshing to have some movies like this on tv again! And Kevin Sorbo, as the great actor he is, makes the Preacher reminds us how to get back to ourselves after we lose everything in our lives! It's a touching wonderful movie!
Congratulations, Kevin!
26 people found this helpful
See all reviews
Back to top
Get to Know Us
Make Money with Us
Amazon Payment Products
Let Us Help You
EnglishChoose a language for shopping. United StatesChoose a country/region for shopping.
© 1996-2022, Amazon.com, Inc. or its affiliates