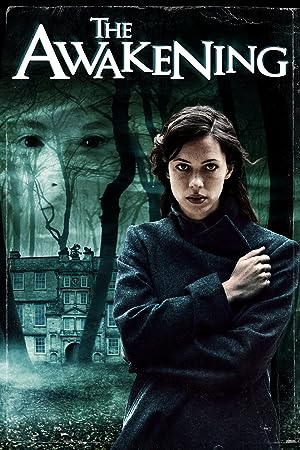 Russell SReviewed in the United States on November 12, 2017
4.0 out of 5 stars
true suspense.
Verified purchase
If you are a fan of the suspenseful build, you will love this movie. This English movie, they do this kind of thing great. We are back in time and there is a "ghost" problem as the school so the owners of the school call in a young lady to debunk this spirit problem. What she is finding is something that she cannot debunk, there is some mounting evidence that there is much more to this school than she first thought. This is a stunning movie in the pacing of it and it does not rely on the usual tricks to get you to jump. Instead we have this marvelous pace to the story. This is a very limited cast and what there is of the cast is the cream of the crop, they all have their parts down to a science. I can't say too much more about this without giving things away. I do recommend this to those who love suspense.
28 people found this helpful

TafkaswfReviewed in the United States on October 9, 2020
5.0 out of 5 stars
An Outstanding Ghost Movie
Verified purchase
I really liked The Awakening. This is one of those ghost movies where you want to watch it a second time, to see the clues as to who was the ghost- and who could see the ghost.

Set in a boarding school out in the British countryside, after World War I, The Awakening has it all: beautiful scenery, good acting, suspenseful story line, a twist at the end, and it moves along at a good pace. The central character is a "ghost disprover," for lack of a better term, that is called in to debunk that a ghost caused the death of a student. Despite her state-of-the-art scientific equipment and her steely resolve, she slowly realizes that there is indeed something supernatural going on in this school. And Yes, she is involved in it.

Throw in the romance/sexual tension between the ghost disprover and the handsome, wounded WWI vet that teaches at the boarding school, and you've got an outstanding ghost movie. Rachael Hall plays the beautiful, repressed, tightly wound ghost disprover who sees everything she knows get turned upside down... but who gets the truth and a good guy in the process.

I'd say The Awakening is a mix between ghost movies The Sixth Sense, The Others (with Nicole Kidman), and some other recent ghost movie that relies more on spooky intrigue than blood and guts and horror. Pick one!

So watch The Awakening. Be ready to watch it a second time too, to catch the clues you missed the first time.

MommaMiaReviewed in the United States on July 25, 2021
5.0 out of 5 stars
Unpredictable twists and turns
Verified purchase
I adore a good ghost story. This one really delivers. There are scares, lots of built-up suspense, and twists I just didn't see coming.

Florence Cathcart uncovers frauds and fakes in the Spiritualist world. She believes all those who claim to speak with the dead are charlatans. She doesn't believe in anything and it makes you wonder if the lady doth protest too much.

She is asked to visit a boy's school where strange happenings occur and it is here where she meets a group of frightened boys who claim there is a ghost at their school. She is skeptical at first until there comes a time she can no longer deny that something beyond the ordinary is going on. I won't say too much because I don't want to give anything away, but this story had a twist in it I just didn't see coming and I really enjoyed it.

january0109Reviewed in the United States on February 13, 2021
3.0 out of 5 stars
"The (Convoluted) Others"....
Verified purchase
Ugggghhh.....This movie was well acted and beautifully shot, but the storyline was so convoluted that by the end I had given up trying to make sense of it. And I didn't even care enough about what it all meant, to even search other reviews for interpretations. The movie seemed to be trying to "out clever" the movie "The Others" but the plot was so exhaustingly complex, with bewildering plot turns, that it became a chore. The Others was great because the story line was easy to become immersed in, thereby leading the viewer to a wonderful surprise ending. Bottom line, there is a certain genius in the simplicity of story telling, and this movie lacked that genius. Three stars for acting, set design and cinematography.
3 people found this helpful

O BashamReviewed in the United States on November 21, 2020
4.0 out of 5 stars
Surprisingly Excellent
Verified purchase
If you've spent any time of your life watching period horror movies or thrillers, you basically know what the journey entails. But this isn't a knock against the movie, but rather a reaffirmation of period horror as a justified staple of the genre going back about two centuries now.

The movie hits all the notes, respects your time, and pays off in ways that even the genre rarely does. Not to spoil too much, but there is a certain expectation with the way these stories end. It was nice to see a subversion of that. Or perhaps it was a return to form, I'm not sure, but it was welcome and inviting of future viewings.

Expertly crafted, superbly acted, and a movie that deserves far more visibility than it receives.

If you liked The Others, Woman in Black, or any Turning of the Screw adaptation or similar fare, this should not disappoint.
2 people found this helpful

joel wingReviewed in the United States on November 30, 2021
4.0 out of 5 stars
A ghost story as a tragedy
Verified purchase
The Awakening starts off as your standard ghost hunting story. Rebecca Hall is a noted author who tries to dispel ghost appearances. She’s brought to a boarding school by Dominic West to investigate a haunting. Things go by the numbers initially with Hall setting up cameras and devices to try to discover who is behind the affair. It then quickly becomes complicated however. That’s because the story has a lot of depth and is written as a tragedy. Hall and West for instance are haunted by their pasts in World War I. The ghost story actually has a lot of substance. The ending has a great twist. In the end the film surprised me because it was not what I expected.
One person found this helpful

Todd M.Reviewed in the United States on September 28, 2019
4.0 out of 5 stars
We had seen it but didn’t remember it.
Verified purchase
There wasn’t a whole lot of horror but the suspense was good and it held our interest throughout and it was a good ghost story. The ending was good and we didn’t see that coming but there’s more than one way to interpret it and that looks like it was done purposely. Some quick flashes or gratuity nudity didn’t add anything that helped the movie.
6 people found this helpful

Golden-FluteReviewed in the United States on May 12, 2014
5.0 out of 5 stars
A good scary movie for those who aren't very fear-tolerant
Verified purchase
I should start off by saying that I have a devastatingly low tolerance for scary movies. My imagination is too big for my own good, so I can manage to creep myself out enough without outside help. I tend to avoid scary films like the plague, but one of my favorite young actors (Isaac Hempstead-Wright) was in it and I felt like I needed to support some of his earlier works.

Even though I originally watched for Isaac, the story completely sucked me in. Wonderful actors like Imelda Staunton never fails to impress and leading lady Rebecca Hall played a very strong woman with repressed memories that have guided her life in more ways than she realizes.

While there are some scary images, what made this nice for me to watch was that there was a story to tell, and a very touching one that actually made me teary at the end. It wasn't meant to just scare, but to move the character forward by looking to the past.

Overall very well done and in a time period that I love anyway.
20 people found this helpful
See all reviews
Back to top
Get to Know Us
Make Money with Us
Amazon Payment Products
Let Us Help You
EnglishChoose a language for shopping. United StatesChoose a country/region for shopping.
© 1996-2022, Amazon.com, Inc. or its affiliates