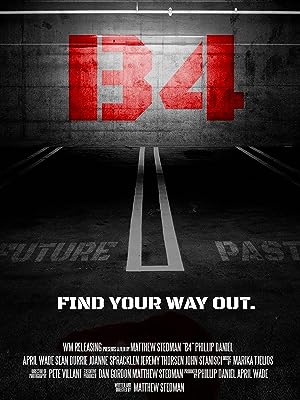 (107)
50min201613+
Three friends find themselves trapped in an underground parking garage with doorways leading into the past and future and floors that repeat themselves for eternity. They must struggle to keep their sanity, if not their lives.

Jose G PenaReviewed in the United States on January 31, 2017
3.0 out of 5 stars
just bored. I dont feel this is a spoiler because ...
Verified purchase
As someone who loves sci fi.. i found this concept interesting, but there are too many issues with the plot. This story takes place in a bubble universe. And you'd think that food and water and passage of time would be a concern.. but they are not. Instead the cast somehow has the ability to forget, and they never get hungry or thirsty.. just bored. I dont feel this is a spoiler because its essential to the story. The ending is not very good either as you just wonder to yourself "why didn't they just do that earlier?".. anyway, its only 1 hour long and not terrible, so its worth watching in your free time. Don't expect to have your mind blown.
12 people found this helpful

Amazon CustomerReviewed in the United States on October 15, 2019
1.0 out of 5 stars
Boring, trashy B-movie
Verified purchase
This was so bad. A bunch of really boring, obnoxious people repeating a horrible situation without any purpose. Bad production, bad acting, terrible writing, worse "humor." Nothing makes sense, there's no internal logic, and I didn't care what happened to any of those unlikable idiots. The stupidity factor is a real problem in this one. A bit of useless violence was thrown in, apparently in an effort to add some crackle to it. But this movie never even fizzes. It's flat as a pancake from the start.

Go watch "Coherence" instead. A far better film in a somewhat similar vein, because the creators and actors knew what they were doing.

And you actually care what happens to the characters, which is kind of key in any story. If modern writers just kept even this one thing in mind, we wouldn't have this flood of crap on our hands today.

AnonymousReviewed in the United States on January 3, 2020
5.0 out of 5 stars
movie offers a short bit of good advice
Verified purchase
there are so many movies that mislead to sabotage relationships and society, it's wonderful to see a movie that gives legit advice on relationships even if it is only a handful of lines out of the entire movie.
the movie doesn't push an agenda or slam people for being what they are, it just accepts that there are different cultures that are irrelevant to each other.
the movie is ideally suited for science and sci-fi bookworms that haven't yet taken their first baby steps at social interaction, and i think that is the target audience for this movie
2 people found this helpful

Shazam!Reviewed in the United States on January 8, 2019
1.0 out of 5 stars
Only Watch This if You Don't Have to Pay For It
Verified purchase
If you're a Prime member, then go ahead and watch it - you won't be paying anything extra. But if you are considering watching this waste of time and you even have to pay $0.99, it's $0.99 too much. So basically, these three people get stuck in a parking garage, and then nothing happens. Really. Well, they TALK about what is supposed to be happening, and there's a lot of things we're supposed to be interested about, like this "mysterious" (cough) blonde girl who says, "You have to WANT to leave." There is much killing and wounding of different characters who then pop back from the dead like "Cube 2: Hypercube", which sadly is much better than this movie. Then the Science Guy goes on to slaughter theoretical physics by saying that M-Theory is about different Quantum Realities, which he then conflates with hypotheses of the Inflationary Universe model and claims that a "wormhole" connects them, which they are trapped inside "for all time" (you've already completely misrepresented four physics theories, pal, do you want to go for five or call it a day?) Even though the running time for the movie is only 50 minutes you will feel like you've been watching it for an eternity. The ending is well...unbelievable. But by that point, you really won't care. I wish I could stick the people who wrote, made and acted in this movie in a parking garage for all time, just so they won't bother making another movie as bad as this one.
2 people found this helpful

DGGReviewed in the United States on September 4, 2018
2.0 out of 5 stars
Alternate universe in a parking garage.
Verified purchase
This is about 3 friends who end up in an alternate universe in level B4 of a parking garage. Yes you read correctly. How many interesting movies have you seen filmed completely from start to finish in the same parking lot?

It tries to combine elements of horror and SciFi but fails to do so. Their explanation of the alternate universe is about as rediculous as this whole movie's plot. I get the feeling a good number of scenes we're edited out as the plot was full of as many holes as their universe had. Didn't really care about any of the characters. There was no sense of urgency for them to get out of their predicament and some versions of themselves had been there for years. With their lack of enthusiasm and energy, I didn't much care either and just wanted this movie to end. I barely got through it without falling asleep.

I don't recommend this movie at all.
3 people found this helpful

HoraceReviewed in the United States on September 16, 2017
2.0 out of 5 stars
Haha. What did I just watch?
Verified purchase
This was a good, really bad movie. The worst, most ridiculously fake fight scenes ever. Horrible wound make up. High school play level acting and directing. Details that have nothing to do with the story line, like her seeing a couple having sex in the club bathroom, then her whispering about it in her boyfriend's ear, and then them chuckling about it. That wasn't a spoiler. It was completely pointless data. Terrible pacing. Terrible dialog. "There is a way out, but first you have to want to leave." She sees herself, and just decides to take a shower. So funny. This was a hilariously bad movie, but the concept was almost good enough to be good. That is, if the science wasn't sooooo bad.
4 people found this helpful

Cat B.Reviewed in the United States on December 30, 2016
2.0 out of 5 stars
Not for Primer Fans
Verified purchase
Having seen Primer, I can't give this a better review than two stars. Budget isn't the issue; Primer was not high-budget. This just seemed less thoughtful, so basic, and wanting to be a horror/suspense film instead of a thinking one (which was its one strength...).
4 people found this helpful

SusanneReviewed in the United States on September 29, 2016
3.0 out of 5 stars
B4 or not B4? That is the question.
Verified purchase
I accept this for what it is: a short, low-budget, probably student film. I like mind-benders, and it's a fun watch if you're not up for a full-length feature film. April Wade (Megan) is the best actor of the bunch. Like a couple of other reviewers, I have seen Coherence, which is similar to this but with better actors and a slightly higher budget.
4 people found this helpful
See all reviews
Back to top
Get to Know Us
Make Money with Us
Amazon Payment Products
Let Us Help You
EnglishChoose a language for shopping. United StatesChoose a country/region for shopping.
© 1996-2021, Amazon.com, Inc. or its affiliates