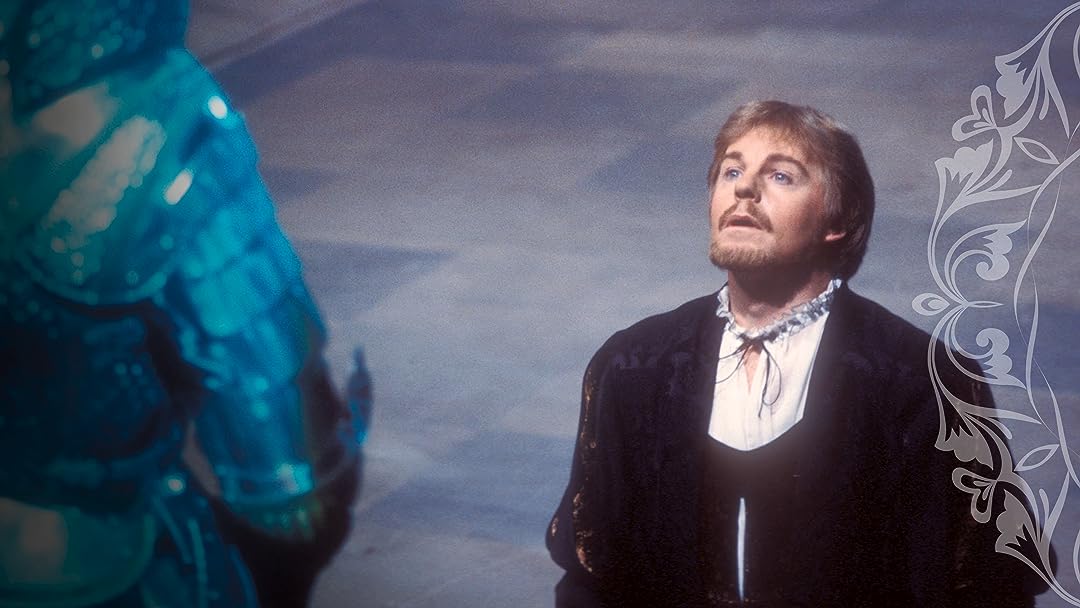 (88)
8.03 h 34 min198016+
BBC presents Shakespeare's classic tale of betrayal, murder, and revenge. Rodney Bennett's television adaptation of Hamlet stars Derek Jacobi as the most complex of all Shakespeare’s characters. Prince Hamlet is told by his father's ghost that his uncle Claudius has murdered him and married his widow.

Watch with BritBox
Start your 7-day free trial
Add to
Watchlist
Redeem a gift card or promotion code
By ordering or viewing, you agree to our Terms. Sold by Amazon.com Services LLC.
Write review

Tsar_NicholasReviewed in the United States on June 23, 2016
5.0 out of 5 stars
Revelatory and hard-to-find production of the unlimited poem!
Verified purchase
It's wonderful that this production is now in in wide release [I hope an on-demand DVD is in the works]!
Jacobi is the definitive Claudius for many, thanks to Branagh's 1996 movie, so it's fascinating to see how he interprets the prince Hamlet -- his emphasis on the "antic" or animated aspect of Hamlet's character is unusual to the contemporary viewer and plays well particularly in the first 'ghost' scene. One speech in particular that I believe Jacobi nails and most others do not quite is the " Seems, madam? Nay, it is; I know not 'seems'..." speech, which Jacobi delivers with the emphasis and indignation that's implied in the text but is so often either muttered or rushed by even the best actors.
Fans of the 2009 Tennant version will welcome the sight of Patrick Stewart as Claudius -- he commands this role and, while I prefer his more measured diction in the newer production, he is so likeable and magnetic -- and indeed less sinister -- as a younger monarch that it is impossible not to fall under his spell here. It is very easy to see where Jacobi cribbed much of his nice-guy Claudius interpretation from Stewart in this version.
Also above-average in this production is the muscular interpretation of Laertes, played here with a self-assurance and steeliness that makes his polar opposition to Hamlet plain from the get-go.
I will be brief : this is positively essential viewing ; you'll clap tyrannically!

RavenReviewed in the United States on May 13, 2017
5.0 out of 5 stars
If you've never seen/read Hamlet, here's a fine film to settle down with (along with Hamlet at nofearshakespeare.com, perhaps)
Verified purchase
Derek Jacobi delivers a staggeringly brilliant performance. I never thought of him as that "worried hand-wringing Dane" who "struts and frets" while avoiding taking action--poor impotent prince!--which is so often how I hear Hamlet described. No, Jacobi was Hamlet who found himself at a most profound and obscure philosophical crossroads. His father's ghost has revealed a horrifying truth to him and has commanded Hamlet seek vengeance on his behalf. Afterward, Hamlet is shocked and terrified to the core by the nature of these revelations (I'm not going into detail for anyone who hasn't seen or read Hamlet before) and he must first make sure he wasn't fooled before taking action. It's a lovely event, this production of Hamlet. It's a treasure chest in that it holds this first-rate performance of a first-rate actor, in his early years.
7 people found this helpful

DrektathReviewed in the United States on February 17, 2011
5.0 out of 5 stars
Quite possibly the finest Hamlet ever filmed
Verified purchase
I own the complete the collection of BBC Shakespearean productions (imported), of which this is a part. I have seen a number of other productions of Hamlet (both on film and on stage). None match this one.

The closest that any other comes is Kenneth Branagh's production. Branagh is to be lauded for including the full text. His version also includes excellent production values. As for Branagh's portrayal of Hamlet himself, I can only give it 4 stars rather than the 5 that I would give to Jacobi's. Branagh does a fine job, but any portrayal of Hamlet must grapple with the emotional subtext of the role. Branagh performs admirably, while Jacobi performs superbly.

A comparison of theatre performances would not really benefit many (and I am too young to have seen productions featuring some of the great British actors in their prime). As far as notable screen performances go, I would rank them as such: Jacobi>Branagh>Kline>Gibson>Olivier. Yes, I know, 'tis blasphemy to rank Olivier at the bottom of that pile, but I just feel that Olivier's performance in the film is extremely stilted and overly choreographed. It very well may be that Olivier was remarkable as Hamlet on stage, but sadly, I have never seen any such performance.

Jacobi brings emotion and believability to a role that, in the wrong hands or if improperly directed, can seem wooden or artificially forced. This is a Hamlet that you can relate to.

Bottom line: to any fan of Hamlet, this would be highly recommended. I'd even go so far as to say that it has the potential to snare a few who are not Shakespeare fans. Production values are adequate (although nowhere near the Branagh production or even the Gibson production). All that being said, if production values and spectacle are what you crave, you're probably not browsing Shakespearean films anyway.
30 people found this helpful

FBReviewed in the United States on February 29, 2016
5.0 out of 5 stars
A magnificent Hamlet
Verified purchase
Finally I've seen the play in its entire text; played by as great an assembly of contemporary actors as I am bound ever to see. New meanings of the play emerge because of the nuances of the new material. Derek Jacobi is outstanding as Hamlet. OUTSTANDING. Patrick Steward and Claire Bloom are wonders to behold. The woman who plays Ophelia is the best I've ever seen. And the direction of the play is excellent from start to finish. Again, finally I understand the ending of the play----which you can't once the text is chopped. But, more than that, the whole of the early parts of the play take on new meaning. Enjoy this Hamlet. And honor it deeply. Note: Several years ago I saw Derek Jacobi play 'King Lear' at
the Harvey Theater in Brooklyn. I wish that there was a recording of that performance....
7 people found this helpful

Lars SveenReviewed in the United States on April 17, 2019
4.0 out of 5 stars
Good production.
Verified purchase
Nearly has every line of Shakespeare's play in it. The sets are extremely spartan, but the acting is superb. I somewhat disagree with their portrayal of Hamlet in this (they clearly feel he is becoming unhinged as the play progresses), but that's something which has been debated for centuries.
One person found this helpful

Paul K. EversmanReviewed in the United States on September 16, 2016
5.0 out of 5 stars
Great BBC Shakespeare from the 1970's-80's
Verified purchase
Shakespeare the way it was meant to be performed. No hollywood special effects, no overpowering pounding "music". There is something atmosphereic about these 1970-80's BBC productions that will never come again. The emphasis is on the actors and the acting, unlike hollywood style shakespeare of today. Then again just about anything the BBC produced back in that 70's and 80's is worthwhile. Strongly recommended.
2 people found this helpful

Jeffrey R. MyersReviewed in the United States on March 21, 2014
5.0 out of 5 stars
Still the Best!
Verified purchase
Despite its age, this production of "Hamlet" is still compelling. The primary reason is Jacobi's performance, which is better than any "Hamlet" I've ever seen, on stage or screen. The production as a whole, however, is also very good with no weak performances. The director's choices for Patrick Stewart's Claudius, especially when he confronts Hamlet at the end of the play-within-the-play, are the most intelligent I've ever seen.
2 people found this helpful

Minzi TaylorReviewed in the United States on October 16, 2015
5.0 out of 5 stars
I love Derek Jacobi
Verified purchase
This is my favorite version of Hamlet. Derek Jacobi and Patrick Stewart ? YES PLEASE !!!! Jacobi as Hamlet is just epic. I had to read Hamlet and watch this for English class and HOW IMPRESSED WAS I ? wow. Who is this Jacobi guy ? Mr. Shakespeare that's all. He was phenomenal and if you like Hamlet.. and even if you don't, watch it. He is EXCELLENT. Excellent. I love him. Stewart as Claudius is very good as well, but Jacobi EMOTES. You FEEL him. His joy and madness and his sadness. It's fantastic.
One person found this helpful
See all reviews
Back to top
Get to Know Us
Make Money with Us
Amazon Payment Products
Let Us Help You
EnglishChoose a language for shopping. United StatesChoose a country/region for shopping.
© 1996-2022, Amazon.com, Inc. or its affiliates